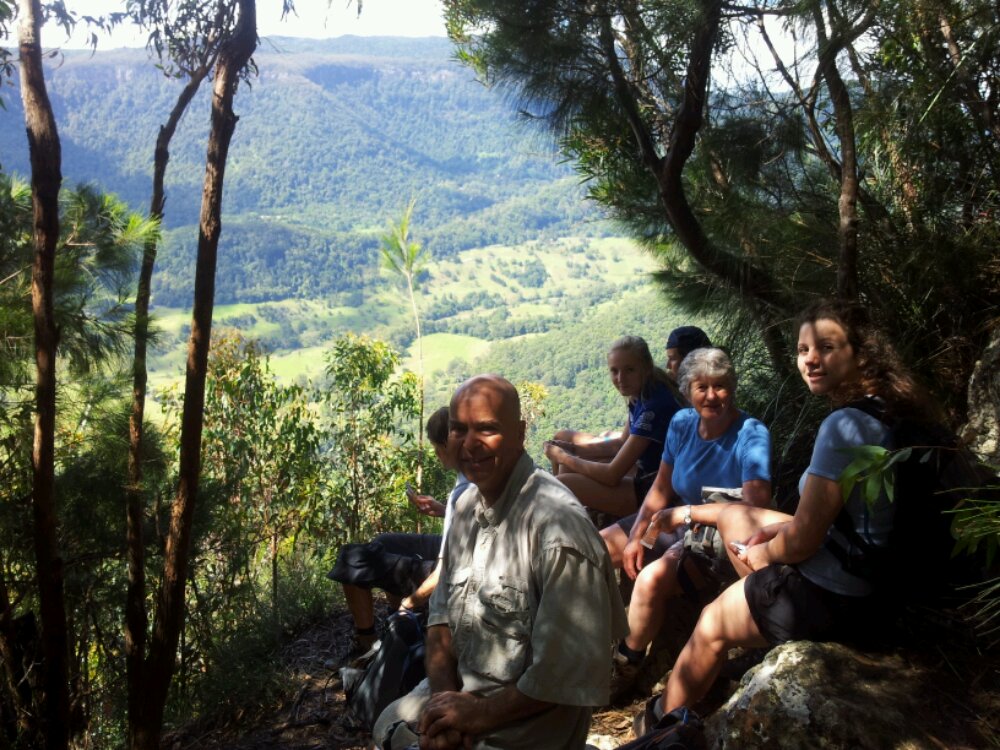 At the crack of dawn this morning a kookaburra outside our window let us know it was time to get up. We had planned to camp up at Binna Burra, but hundreds of other people had the same idea, and enough of them had remembered to make advance bookings, so every site was full. When  we saw all the tents packed together like sardines, we stopped behind disappointed.

I joined Felicity in the pool for a splash before breakfast, then we all packed into our cars and headed back up into the hinterland. The track we had chosen for today was a lot easier going than yesterday, and I enjoyed striding along without having to watch my feet all the time.

We started in rainforest, but after branching off the main Border track the trees began to change, and soon we were passing though dry eucalyptus trees, and then montane heath. Every now and then we stopped at rocky outcrops to admire the view. Sometimes we could see the hi-rises of Surfer’s Paradise to our east, and sometimes New South Wales though the hills to the south. In the photo we are at the Numimbah Lookout.

I was at the back of the group as usual, so I only heard reports of snakes and other wildlife that the others spotted scurrying into the bush. When we stopped for lunch, a couple of lizards nearly a foot long kept us entertained.  I thought they only ate insects, but I can report that they also seem to enjoy bits of cheese sandwich that accidentally dropped on the ground. One was so friendly that he hung out for a while on Judith’s sarong next to her. She decided to name him Eddie Lizard.

On our way back, we made a detour to see the Ballunjui Falls, and in the process lost the two younger teenage girls, who had run ahead. By the time we found them, we had also lost Stefan, so I went back down the track to leave a note for him at the last intersection, with the message that we were heading back to the car. I then had to run a couple of kilometres to catch up with the others, who by this time had found him, so all was well again.

Now we are back on the Gold Coast, and Felicity is cooking an Indian dinner. I’ve been for another swim in the pool, and even though it is now dark, it’s still a bit hot to wear a shirt. It is an extremely pleasant environment compared to NZ at this time of year.