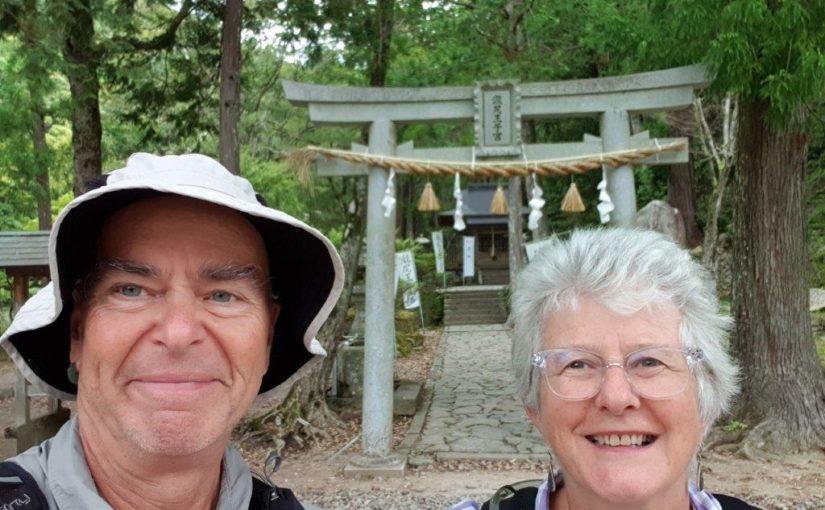 On the peninsular south of Osaka is a network of Japanese pilgrimage trails known as the Kumano Kodo. Written records from over a thousand years ago show that these have been used since ancient times.


We booked on an 11 day self guided walk organised by a company called Oku Japan.

If I tried to document the walk day-by-day it would take me many hours of work, so the following notes are going to be patchy in the interest of getting these photos posted. I’ve copied some of Felicity’s emailed reports where indicated.

We spent most of the first day taking trains and buses to the start of the trail in Takijiri. From there we walked nearly 5 km to the Organic Hotel Takahara which took us a couple of hours. When we arrived, we went to gender-separated baths where we sat on a small stool outside the bath and washed before soaking in 40° hot water. Afterwards we both put on a hotel-supplied Yukata robe, and wore that for the remainder of the evening. This was to be the pattern for the rest of our stay in Japan.

My first surprise was to see how much engineering has gone on in relatively remote areas. Most steep hillsides are either covered in concrete or have wire netting hung from strong steel cables. I guess earthquakes are a constant hazzard. Roads usually punch straight through tunnels under mountains, then cross valleys on viaducts. This means you can drive far inland without gaining much hight. The Kumano Kodo trail, on the other hand, tends to climb up to a pass on mountain range, perhaps traversing a narrow ridge along the way, then descend into the next valley.

FGYS: Monkeys, small bears and wild boars live in the mountains but so far the most exotic wildlife we have seen are land crabs and a giant earthworm. Along the trail there are many shrines with drinking water.

The second night we spent at a natural hot spring named Chikatsuyu Onsen. It was our first encounter with a futon on a tatami mat, which we both found incredibly uncomfortable – worse even than a Thermarest in a tent. I recommend you try and visit Japan before you get old!

We soon learned that if you hunt through an inn’s cupboards you can usually find a spare futon or two and re-make the bed.

FGYS: We have had 3 days walking; today is a rest day – two nights here at Yunonmite Onsen (hot spring). We will walk to a village about 1 hour away which has a public hot pool beside the river. The meals are truly amazing. Many different delicacies each beautifully presented. The inns have hot baths mostly gender-separated although we did have private pool here last night for the two of us.

Each night the inn we stayed at served a banquet of local food. Sometimes it was hard to eat everything because there were so many delicious dishes.

FGYS: There are wonderful things made with all sorts of mushrooms, tofu, aubergine but most include some sort of animal. Lots of raw fish, scallops, octopus, whole small grilled fish, sea snail, seaweed soup tonight that probably had some fish stock. We have just had 12 courses / dishes tonight and you could probably have eaten about 3 or 4 (although I am sure they could cater for vegetarians and given you different stuff).

Bathed in a cold river with hot water coming from a spring today. Could lie comfortably as long as we kept the water circulating.

Our vegetarian daughter was interested to know how she would get on. I told her that I’m sure Japanese could cater for vegetarians, but you would miss out on a lot of interesting dishes. Of our 12 courses at dinner one night, at least 6 involved some kind of meat or fish. We even had some horse sashimi, which was a first for me.

I was told later that most dishes involve some sort of fish stock at least, and that you have to learn the word for “monk food” if you want to be sure you are not eating any animal products.

Another big surprise for me was how many empty houses and abandoned farms there are in rural Japan. We passed through dozens of sites where there clearly used to be villages. One had a notice telling us that the last inhabitants were relocated by the local government as recently as the late 1950s.

I can see that being a subsistence farmer on a tiny scrap of land is no longer an attractive option, but an hour or two’s drive away millions people are crammed into tiny apartments in high-rises.

During our “rest day” at Yunomini we visited another onsen (hot spring) village where there are natural springs on the river bank. The pool was a bit flooded, so mostly cold water, but it was a hot day and we enjoyed it anyway. While I was waiting for Felicity to get changed I saw a small snake which was exciting.

FGYS: Haven’t been able to identify the snakes but they don’t appear to attack. I nearly stood on one on the trail yesterday and it took off fast.

I think what I saw was a small rat-snake – which is not venomous. But other species here are so I wouldn’t want to get bitten.

Yesterday we arrived at the coast, and after dropping our gear at the hotel visited the best hot spring of the trip so far. We took a ferry across the harbour, dressed only in our yukatas and traditional Japanese sandals to another hotel. They have a tunnel through a headland to a huge bath complex in a cave overlooking the sea! It is a spectacular setting.

FGYS: We are now by the sea Kii Katsuura and last night went to hot spring baths in a cave. You could look at the ocean and hear the waves crashing just below, and smell of mineral water mingled with that of the sea.

We have now done two sections of the kumano kodo and today we get a bus back to near the central shrine of Hongu to take the path north to Mt Koya. Another 5 days of walking.

I am loving walking all day (mostly steep mountain trails in the forest, with lots of little shrines en route, then staying at amazing places with exquisite meals and hot spring baths.