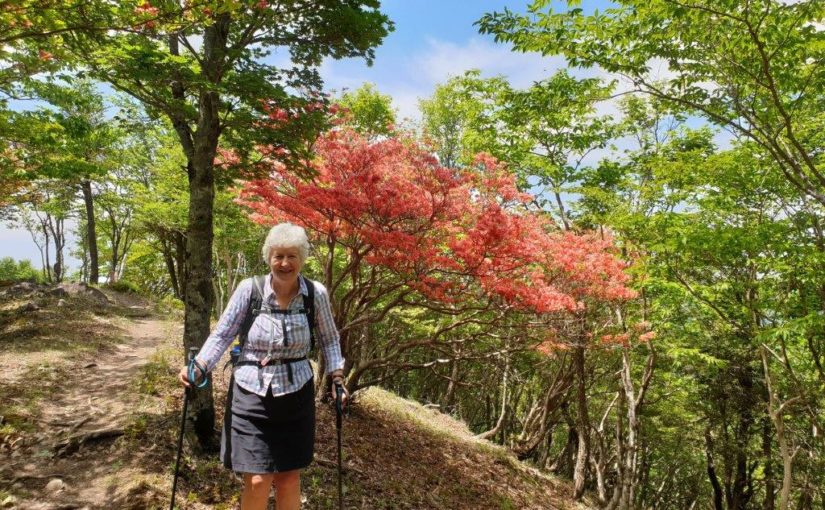 On day 7 we started the Kohechi section of the Kumano Kodo trail, which heads northwards from the town of Yagio to end at Mt Koya four days later. Each day the path crosses a mountain range via a series of passes, all involving over 800 metres of ascending, and usually almost as much coming down again.


The first climb up to the Hatenashitoge Pass became a bit gruelling, as the temperature had risen into the mid-30°s before we even started. This was one of very parts of the trail where the enjoyment rate dipped under 100% for me.

I wished we could have had an extra night in Yagio, allowing more time on the coast and the possibility of a crack-of-dawn start if the predicted temperature is likely to be over 30°.

When we finally reached the top it became obvious that the writer of our guide had not actually walked this section of the track to check that his/her instructions were correct, and that the given distances were consistent with the signage on the ground.

There are numbered Kanon statues all the way up, so people will inevitably be disappointed to find that beyond 15 does not signal “the final push to the pass”, but in fact the push is to statue 16 from where the top is still nowhere to be seen. I’m sitting on top of the pass at statue 17, as you can see from the sign if you squint a bit.

At about 4.30 we reached the recommended lunch spot.

FGYS: Tough day yesterday. Had to get bus to start so only began at 11.30 am. Climbed 1000 m in heatwave, then down again. No detailed instructions on how to find village and inn and a maze of roads and bridges. Didn’t make it to the inn until 6.30 pm and starting to get dark.

Wonderful hot spring bath outside with view of river then dinner served in our room. Dishes keep being delivered so photo does not show all. In farmstay tonight.

As you can tell from the above, moral improved dramatically the minute we located our inn at Totsukawa Onsen. I’d cheered up quite a bit about a kilometer down the hill once we got out of the plantation forest.

This part of the trail passes through Hatenashi, which has a large stone marker proclaiming that it is “one of the hundred most beautiful farming villages in Japan”. I’m sorry we didn’t reach here much earlier in the day, so that we could have passed through this very scenic area at a more relaxed pace.

The next couple of days were longer, but it wasn’t quite as hot and we did most of the climbing in cool morning air anyway.

Another highlight for both of us:

FGYS: Spent the night before last in 300 year old farmhouse run by 80 year old woman and her son who grows the vegetables (see photo of them by their gate). Two tatami mat guest rooms divided by screens.

Mother and son slept on futons in kitchen and had to go past them in the night to get to the toilet. Very hospitable and fed us well!

Yesterday was long. 8.5 km slog in the heat up to the summit (Mt Otawa) and then about 10 km down and to the village where we are staying (Nosegawa Onsen – another hot spring).

Today walk to Mt Koya and spend tonight in monastery, then Osaka the following day. Has been great walking every day and experiencing Japanese life in these mountains.

At the Nosegawa Onsen beside the Kawarabi-gawa River, a Dutch guest treated us to small concert on the hotel’s piano. In the morning we took advantage of the hotel’s transfer bus to avoid the main climb of this section, which is 50% on paved roads anyway. This made for an easy final day instead of yet another big mission.

In the early afternoon we entered Koyasan in the rain, starving hungry because we hadn’t found a sheltered spot to sit down and eat our little bento boxes. We found a dry seat at a bus stop, sheltered by an overhanging temple wall, right in the centre of what turned out to be a large town, thronged with tourists of all ages and nationalities, along with the infrastructure that supports a large tourist industry.

It was quite a culture shock after the quiet and peaceful trails through the mountains.

FGYS: Wet day today but easy walk. Spent afternoon at Kongobuji temple, site of origin of Shingon Buddhism, and a fitting end to our pilgrimage walk.

Monastery we are staying in is very beautiful, and does have wifi after all! Off to Osaka tomorrow.

I enjoyed Mt Koya though, particularly staying at the monastery and being waited on by monks. I even enjoyed the vegan meal!

In the morning we had time to walk around the town, and through the enormous Okunoin cemetery, before catching a bus, then a funicular cable car to a train.