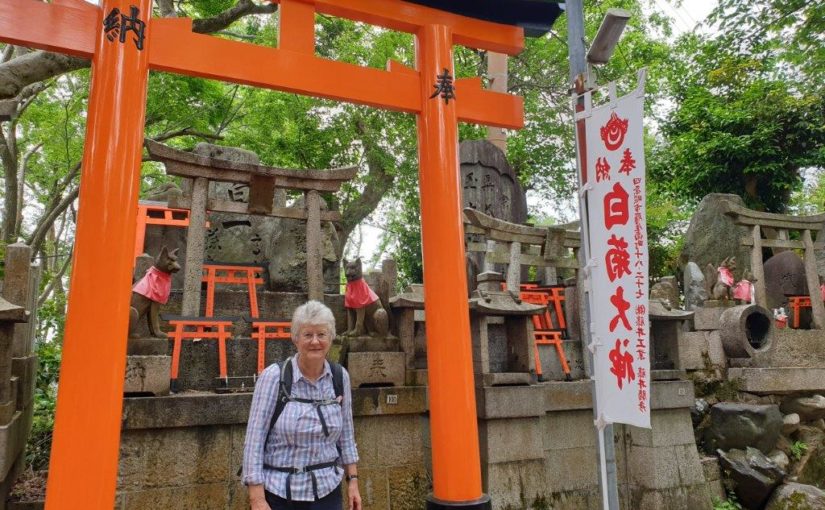 As Felicity was invited to deliver the keynote speech at the opening of the WONCA APR Conference 2019 in Kyoto on May 16th, I decided to tag along so that we could do some adventuring in Japan afterwards.


The day after we arrived, we felt like some exercise after the long plane ride, so we both climbed to the top of Mt Inari, passing through hundreds of vermillion torii (Shinto shrine gates) on the way.

The next few days I was mostly on my own while Felicity ran workshops and attended meetings at the conference. At the beginning of the Philosopher’s Walk, I was interested to see a wide railway which once allowed boats to be lowered down a steep slope at the end of a late-19th century canal which runs from Lake Biwa, in the hills behind the city.

I had some company one day from another conference husband. We hired mountain bikes and rode into the hills to the north alongside the Kamo river to visit the village of Kumogahatadetanicho. There wasn’t much to see there, but it was great fun flying back down the hill through the forest.

Felicity and I attended a function or dinner every evening, so I didn’t have time to do any blogging. We did get back to the hotel quite early a couple of nights, but just around the corner I had discovered a small bar serving excellent Japanese craft beer, so we made the best of that.

When the conference ended, the two of us had another day of walking around, first visiting the Monkey Park Iwatayama, then numerous temples and gardens.