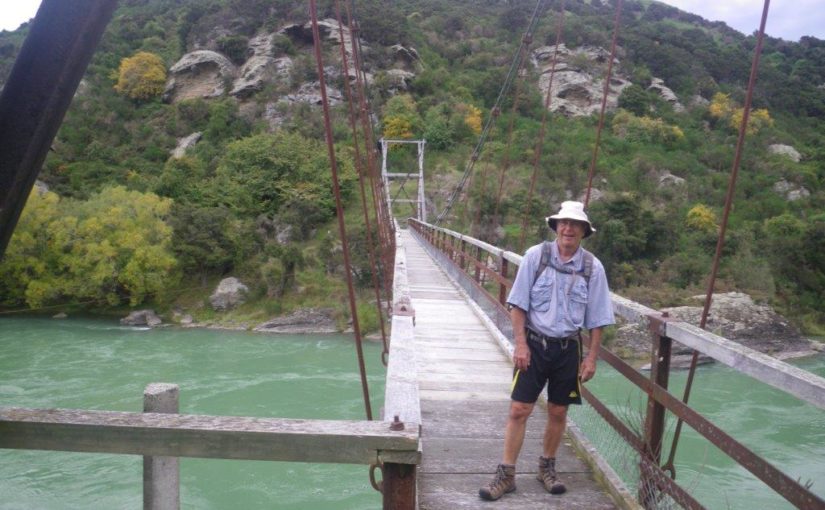 A few kilometers down the Clutha River from Millers Flat there is an old ghost town named Horseshoe Bend. At the height of the gold rush in 1863 it had a population of several hundred people. Today there are only a few signboards to mark its existance.

We parked our car on a farmer’s land just off the highway between Beaumont and Roxburgh. Horseshoe Bend is on the other side of the river, connected by an historic swing bridge along a walkway.

In the early days, the only way across the river was by boat, which meant that if it flooded the town’s children could not get to school. In 1887 the council installed a wire with a hanging cage 75 meters above the water that could be pulled from side-to-side.

Unfortunately the wire was higher at one end than the other, so while it was easy to get to school it was hard getting home. After many complaints some councilors visited to investigate, but they were too afraid to go across.

The manager of Beaumont Station offered a £30 subsidy towards the building of a suspension bridge, which was finally completed in 1913. At one time there were many of these bridges across the Clutha, but this is the last remaining example. We hoped that it would stay intact for another hour or two at least so that we could get back to our vehicle!

Luckily for us the bridge has been repaired in recent years, but parts of it are still pretty ancient and some timbers need replacing. A sign warns that no more than five people at a time should cross.

We walked another kilometer or so up the road from the town site to see the Lonely Graves on top of the hill. A local legend is that a man named William Rigney found the drowned body of a man which had washed down the river, arranged a funeral, and buried him with a wooden marker inscribed “Somebody’s Darling Lies Buried Here”.

Rigney himself wrote to the local newspaper and denied that he had found the body, claiming that his involvement was only to help building the fence around the grave site. When he died himself however, he was buried next to the unknown man, with a headstone that reads: “Here lies the body of William Rigney, the man who buried Somebody’s Darling.”

On the way back to the bridge we stopped to collect water cress which was growing abundantly in a drain beside the road. We decided to spend the night at Pinder’s Pond, and were astonished to find two identical Explorer Motorhomes already there.