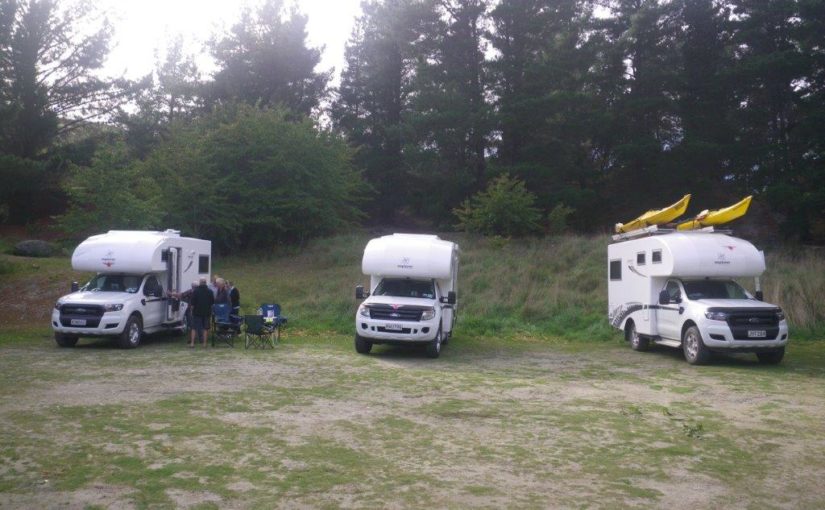 Because I wanted to visit my aunt in Alexandra we decided to stay for the night at a place just south of Roxburgh called Pinders Pond. To our astonishment there were already two Explorer Navigator motorhomes parked there side-by-side so we joined them.

The pond is a deep hole beside the Clutha River that was dug in the hope that there would be gold on the former bed of the river. It was not successful, but has left behind a great asset for the community.

In the morning we noticed the sky was very red, so we walked down to the banks of the Clutha to have a look before the rain arrived. We were able to sit outside with the other Explorer owners and eat breakfast while we swapped notes, but not long after we hit the road the clouds rolled in and the rain poured down.

After a cup of tea with Auntie Pat we continued driving and by late afternoon were a bit north of Waimate. The Campermate App suggested there was a good place to stay out on the coast at a place named Waihao Box. Right until we arrived we were passing rather boring farmland, but the spot at the end of the road was very attractive.

The Waihao River did not have a permanent river mouth, so in 1896 local farmers built a large wooden box through a gravel bank so that the surrounding countryside would drain to the sea. It was replaced with the present structure in 1910.

There were several signs warning that the gravel at the side of the box is very unstable, and dangerous if the tide was running out as it was when we went to look. Later we saw a memorial in the car-park for a 14-year-old boy who got drowned when he went too close.

In the morning the sun was shining and the sky was blue, so we were very tempted to kayak up the river. But knowing that the surrounding countryside had few interesting features we decided to continue north.

When we reached Timaru I was ready for a break from driving, so we walked around the cliffs north of Caroline Bay, past the freezing works and back around the road. No photos though.

One thought on “Pinders Pond and Waihao Box”