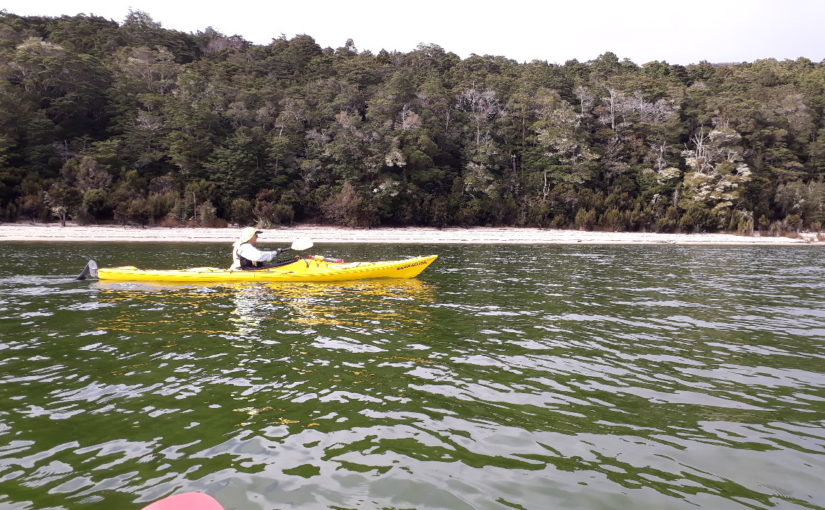 There is no freedom camping around Manapouri, so we parked for the night at a motorcamp in town. I spent the late afternoon catching up on some work while we had good internet.

After breakfast we drove around the corner to Pearl Harbour at the mouth of the Waiau River, and were lucky enough to find a park just opposite the boat ramp.

We paddled out into the lake, around the shore of Surprise Bay, and out to the point where we could look down the western end of the lake. The water was fairly calm, but there was low cloud so we couldn’t see many of the mountains that surrounded us.

In contrast to Lake Monowai, Manapouri has a natural shoreline, with nice beaches and outcrops of rock. I am very glad that protesters stopped the lake levels being raised back in the 1970s, because it would have been a tragedy.

Because the weather looked a bit dodgy, we didn’t want to go too far. Back in the Waiau River the water was completely flat, so we paddled slowly up for a couple of kilometers before heading back to the motorhome.

As we were packing the kayaks away, a guy we had met up on the Borland Saddle came up and told us that he had managed to drive his vehicle and trailer through the washout that had stopped us, and then managed (after a bit of reconstruction) to get through the second washout as well. When he came to the next creek crossing however, the drop down to the water was almost 5 meters so nobody is going to get through to the campsite until an excavator re-builds the crossings.

We at lunch up at the town looking out over the lake, then drove through to Lake Te Anau. There is a DOC campsite at Hamiltons Creek a few kilometers along the Milford Sound Road, so we found a nice spot in the trees close to the water.

Unfortunately the wind is causing a surprisingly big surf, and out from shore we could see lots of white-caps as we walked along the beach. Unless conditions are greatly improved in the morning we won’t be paddling on this lake. It will be nice listening to the waves as we go to sleep tonight.