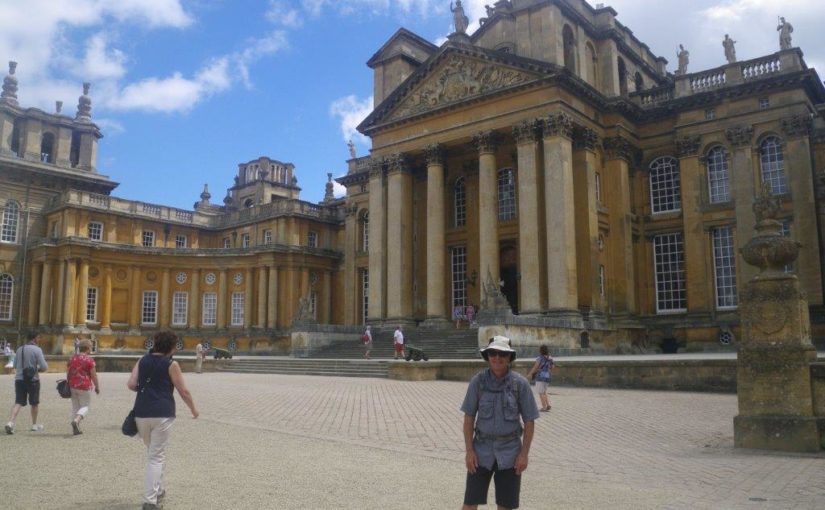 We spent most of a day packing our gear, departing Norwich and travelling to Oxford, but we had a couple of hours to wander around the town with our hosts Ros and Peter before heading home to their house. All of this university town is fascinating, but I thought the most interesting stop was the Weston Library, which is part of the Bodleian Library.

They have an ever-changing display of “treasures”, which included Shakespeare’s First Folio, a copy of the Magna Carta (partly eaten by a mouse), and a map of China and SE Asia acquired in 1659 that is remarkably accurate. I was also impressed by some huge books containing hand-coloured pictures of exotic tropical animals and plants, dating from the early 1800’s.

On our last visit to Oxford, the streets were filled with neatly dressed students wearing colourful academic robes and mortarboard hats. This time, they were mostly wearing normal clothes covered in shaving foam, confetti, and glitter. Quite a few were swilling bottles of champagne, and I wondered if they would be posting pictures of themselves to FaceBook for potential employers to see. Apparently they have just graduated.

Yesterday we went to visit Blenheim Palace. This huge estate was given to John Churchill, 1st Duke of Marlborough as a reward for defeating the French at the Battle of Blenheim in 1704. Although there were tremendous casualties on both sides, the war was won by superior strategy on the part of the English. Until then the French had been assumed invincible for many decades, so it significantly changed the balance of power in Europe.

The building and grounds exceeded my expectations significantly. It was built between 1705 and 1722, and is the only building in England not owned by the crown or the church to be considered a palace. We spent nearly an hour walking around the ground floor admiring the architecture, the amazing artworks, and the historical artifacts, including collections of captured French military standards (flags). In my photo, Felicity is standing in front of an enormous tapestry commemorating the famous battle.

The attendants made me wear my backpack on the front to avoid knocking stuff over, so by the end of the tour my neck was sore from looking up at the paintings on the roof. In one room there were a couple of interesting couches with a large section for courting couples and a small, divided section on the end for a chaperone who sat looking away but who hopefully exerted an inhibiting effect on the youngsters.

Another claim to fame for Blenheim Palace is that it was the birthplace of Winston Churchill. There was a special exhibition about his life, and I gained a better appreciation of why he was so confident in his military abilities, having grown up surrounded by his illustrious ancestors.

The grounds were equally impressive, designed by Capability Brown at vast expense. He dammed a small river and turned it into a huge lake with a large stone bridge in front of the palace. Felicity wondered why there was such a large, bare expanse of gravel immediately in front of the house, but inside we discovered that it was to allow the military to parade around with their horses and infantry.

Over the bridge is a wide grass avenue stretching towards the horizon, and about half way along is a 41 meter high Column of Victory with a lead statue on the top. Around the base there is an inscription with the Acts of Parliament endowing the estate to the Duke of Marlborough.

On our way out to dinner, we spent an hour at Christ Church College enjoying Evensong. Most colleges have a chapel of some kind, but Christ Church was founded as a priory around 710 AD and has it’s own cathedral, most of which was built in the 12th century. It is famous for its choir, so we enjoyed an hour of listening to hymns in the traditional acoustics.

Today we have moved home to stay a night with another of Felicity’s colleagues. She had a lunchtime engagement, so we went for a long walk up the Oxford Canal to the village of Wolvercote, then back to town along the River Thames Path. The Thames is remarkably clean up this far, and we saw dozens of small fish as we crossed a bridge. Later we saw a fisherman with unbelievable amounts of gear catch a fish that he told us was a perch, which he intended to throw back.