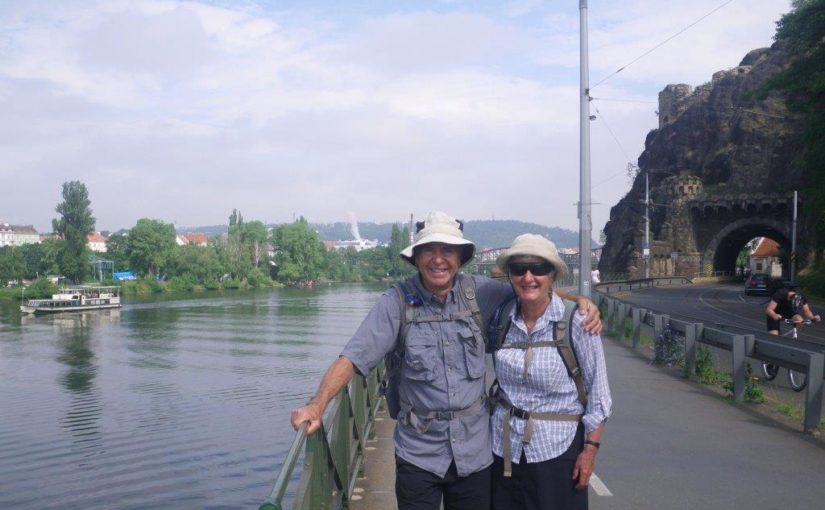 By the time we arrived at the Vysehrad hotel in Prague last night, Felicity’s colleague had got tired of waiting for us in the lobby and had decamped to a pub across the road. We dumped our bags and met her there, where we enjoyed a delicious and cheap glass of Czech beer.

The first few restaurants we tried had stopped serving food by 8.30, but we eventually found one and enjoyed a typical meal of grilled pork ribs and potato pancakes. When we arrived back at the hotel there were notices everywhere informing us of a “hot water accident” meaning that only cold showers were available until morning. Luckily we were hot enough to make it bearable.

After breakfast we joined Katherine and walked down to the Vltava river, where our first stop was at a coffee stall with a barista who knew how to make coffee that was not only drinkable, but actually enjoyable, in stark contrast to the beverage served at breakfast. Prague is completely infested with tourists from all over the world, as the fifth most visited city in Europe, which is understandable given how beautiful it is.

Prague has existed as a city for over a thousand years, and was the traditional capital of Bohemia. In the 14th century, it was the home of Charles IV, Holy Roman Emperor. In the 16th century it was ruled by the Habsburg dynasty, and in the 19th century became part of the Austro-Hungarian Empire. This was was defeated in the first world war, leading to the formation of Czechoslovakia.

We walked alongside the river into town, and headed for the church of Our Lady of the Snows. It has one of the highest ceilings in Prague at 34 meters. The interior gave us an idea of what the cathedrals in England must have looked like before the protestant reformation. Most of the walls were painted, and there were statues of saints and holy figures everywhere.

Our next stop was the old Jewish Quarter, where several synagogues have been preserved as monuments. I suspect part of the motivation for keeping them was that hundreds of tourists are prepared to pay about $25 to look inside. We contented ourselves with looking through the door for free.

In the city square we waited to see the famous astronomical clock on the town hall do its thing at midday. This is often judged as one of the most over-rated tourist attractions in Europe, but it was fun to watch the doors open and the twelve apostles parade past, and the four figures of vanity, greed, death, and lust move their heads. Finally, a golden rooster at the top crowed before the bells strike the hours.

We crossed over the river and looked at some of the many gardens and palaces. We climbed up the hill towards the castle which overlooks the city, stopping on the way to eat a sausage and another potato pancake. The castle was also expensive to enter so we didn’t bother to go inside.

Back at the bottom of the hill, we crossed back across the river on the historic pedestrian-only Charles Bridge. There were several beggars bowing down praying in the hope of influencing gullible tourists. It was a hot and humid day, and it looked like a thunderstorm was immanent, so we caught a tram back along the waterfront to near our hotel.

This evening we have been at a reception following the WONCA conference opening ceremony. The speeches were mostly fairly boring for a non-doctor like me, but at the end the woman master (/mistress?) of ceremonies bought a couple of musicians on stage and performed some very professional songs. The reception had excellent beer, passable Czech wine, and a great selection of cheese and cold meat, but not a single vegetable. A young female publisher who is taking us to dinner tomorrow has the misfortune to be a vegan, so all she could nibble on was some dry bread.

The final photo is out of order, but is of a stucco wall with artificial stalactites in the gardens of the Wallenstein palace, now the home to the Czech Senate.