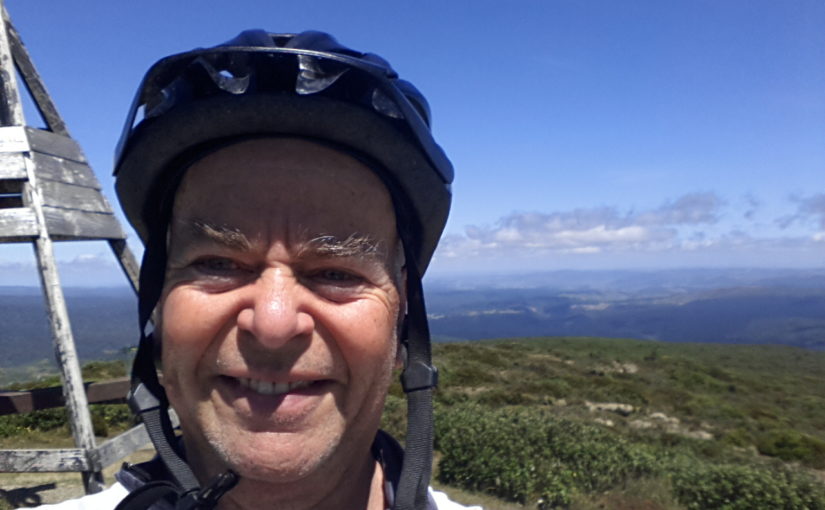 I had done quite a bit of driving around the city completing chores, so by the time I left town mid-afternoon Wednesday, I wasn’t feeling like travelling far. I also felt like a swim so I returned to the Les Atkins Reserve next to the bridge over the Waikato River at Tauakau.


Since I hadn’t done any exercise I rode my bike around the 4WD tracks that locals have made in the swampy area on the bank of the river. There are a couple of small roads that I have always wanted to explore so I did that too. By the time I got back to the van I was very ready to plunge into the water to cool off.

Next day I drove to Hamilton, and checked out the Pukete Mountain Bike Park. It is mostly tucked into a small valley behind an industrial area near Te Rapa, but extends over the hill behind to the grounds of the town’s sewerage treatment facility. I could tell this because the trails are downwind, in an area that is presumably not desirable for housing. I was impressed by the amount of track-building that has clearly gone on here.

I could see there was a band of rain coming overnight, so I decided to postpone my trip up Mt Pureora in completion of the Timber Trail, and to ride further west where it would clear up first. I parked for the night at the Mangapohue Natural Bridge car park past Waitomo Caves, and managed a quick walk up to the spectacular formations just before the rain started.

In the morning I decided to have another look at the rock arch, and this time took some photos. It was still drizzling a bit, so I went for a drive out to the coast to see if I could find a kayak launching place on the Kawhia Harbour.

It turns out that there is, next to the Te Waitere Wharf which seems to be accessible even at low tide. I then decided to check out Lake Taharoa, which looks quite pretty, but offers no access to kayaks from what I could see. Right at the end of the road, out on the west coast, I was surprised to find a huge iron-sand mining operation carried out by NZ Steel.

After lunch I rode 5km up the Waitomo Forest Trail before turning around and returning. This trail is based on the original “six foot” cart track to Honikiwi built by soldiers in the early 2Oth century.

On the way south, I took a detour in to the Mangaokewa Reserve just past Te Kuiti, because I knew I would be able to swim in the river, and get clean.

This DOC campsite is at the start of Timber Trail, and since I was keen to complete the last section up Mt Pureora, I spent the night there. It is a lovely spot, but I have not found anywhere to swim nearby.

I hit the trail straight after breakfast, and enjoyed the cloudy skies as I climbed steadily uphill. There is some original, unlogged native bush at the start, but most of the rest was through regenerating forest. I rode up to Bog Inn turn-off where I had been before, and went a little way down the side trail. I quickly realised that this is not ridden very often, and would be much more of a challenge than the well-groomed Timber Trail.

On the way back I left my bike and walked up a track to the to the summit of Mt Pureora. This is a heavily used track that was built quite well about a decade ago then not maintained since. I think the sign that suggested something like 1.2 km / 20 mins is badly wrong. I kept thinking I should turn around, but the orange DOC triangles every 10 meters kept luring me on.

When I finally popped out of the bush onto the actual summit, I found myself on top of the world. Views for miles in every direction, with Ruapehu figuring prominently of course. It was a bit windy to have lunch right on the top, but a short way down the track I found a step beside the path from which I could look out at the mountain as I ate.

On the way down I took a side trip to see an old Caterpillar 2-ton bulldozer abandoned by the loggers. I kept riding further on the sidetrack and came to a gravel road which I was sure came out just near the camp ground, and would be a short-cut. After a couple of kilometers a passing vehicle covered me in dust, and I realised I could be riding single-track in the bush instead, so I turned back to officially complete the trail. (36km today)

Taumaranui seemed like a good place to stop for supplies and internet access. I parked down at Cherry Grove on the edge of the Whanganui, but it was noisy and camping is not allowed. I found a good looking campsite a short way down the river, where canoeists often stop for their first camp, and as soon as I arrived I leaped into the water.

I hit the road straight after breakfast, and left the vehicle at National Park, next to the railway station.

At the top of the hill to the west of town there is a block running south to Erua which was once milled by a joinery company. In the early 1920s they built a tramway to haul out logs.

After a few years, the company purchased a large quantity of second hand steel rails from an unsuccessful Fijian sugar mill, and replaced the original wooden rails.

When the timber was gone, the rails were ripped up and re-sold for a handsome profit. The gently curved and benched track left behind is a fantastic place to ride a mountain bike.

The regenerating bush is so beautiful that I dawdled along slowly, enjoying a trail that lets you look around. I came to a fork and chose the harder, western trail, which climbed uphill to Erua Rd, which I rode down. There was a magnificent view of snow-capped Mt Ruapehu taking up half the horizon, but in retrospect I should have ridden back down the trail rather than down the boring road.

When I reached the exit of the eastern branch I rode back in to the junction, and stopped for lunch. This section was OK to do twice, but the western section would be better.

A few hundred meters along the metal road was an entrance to another section of downhill single-track. It should have had a sign warning about the excessively distracting views. I kept catching glimpses of snowy peaks, then remembering that when flying downhill at speed it is preferable to have one’s eyes exclusively focused on the track ahead.

I made it down in one piece, and enjoyed a section of the Erua Tramway, which ended back on a metal road. I had been thinking all morning that this ride is seriously under-rated, and deserves far more publicity. Sadly, the ride home changed my views somewhat. It is nearly all out of traffic, but as it follows the rail line back to National Park it traverses metal roads that are quite difficult to ride on, and without much scenery to compensate.

This campsite is near the start of the Bridge To Nowhere track. It is a fantastic spot, with a big deep river pool to swim in, and hundreds of private camping spots. I spent a while swimming in the current, but I started getting a brain freeze from the cold water. I went for a stroll after dinner, and discovered that this place is huge, and had hundreds of campers.

In the morning I parked at Ohakune, and headed out of town on the Old Coach Road. In 1906 this road became very important because it connected the northern and southern termini of the uncompleted Main Trunk Railway. Because of the constant stream of traffic, it needed to be usable in all weather conditions, so the road was upgraded to have a stone paving surface, very much like Roman roads were constructed.

The railway opened in 1908, and the road quickly fell into disuse. The bush reclaimed the space, and for all intents and purposes the road was lost for many decades. In 2002 it was “rediscovered” and opened up by volunteers. Some sections of the cycle-way deviate from the Coach Road at times to pass interesting railway memorabilia.

In the 1980s, modern earth-moving equipment was used to re-route much of the railway, leaving several unused viaducts and a tunnel. The curved viaduct from where I took the photo was one of the most advanced engineering feats in the world at the beginning of the 20th century.

It took longer than I expected to reach the end of the track at Horopito. I had decided to stop for lunch as soon as a shady spot appeared, but it wasn’t until right below the car-park that I spotted a pretty stream flowing out of a gorge, with trees overhanging an inviting flat spot on the bank.

I had bee a bit worried by the amount of downhill on the final few kilometers before lunch, but riding back up was not difficult once I had re-fueled and rested. It wasn’t long before I reached the high point from where it was mostly downhill to Ohakune. I was parked right beside the Mangawhero Stream, so as soon as my gear was stowed I plunged in to a deep pool.

I decided to drive up the mountain road and check out the DOC Mangawhero Campsite, and it looked a very suitable place to stay. It even had internet. I chose the spot where I had the best view of the mountain in the middle of the back window, and looked forward to admiring the view while I ate breakfast in the morning.

It rained overnight, and the clouds were still building next day. I never saw any sign of Ruapehu again. I had wondered about riding 14km up the Tukino 4WD track, but with bad weather coming I decided to change plans. To tell the truth, I was also a little weary after my long rides in the previous days.

I decided to explore the trails around Ohakune, so I parked by the Big Carrot, and followed a network of new and old trails through Jubilee Park until I got to the road into town from the north. I crossed this, and headed up the Mangawhero walkway beside the river, and ended up at the start of the Old Coach Rd.

I was eating lunch in the vehicle when the rain started, and I knew I had made a good decision. I spent the afternoon driving north, and arrived at Mangaokewa just before coffee time. I had outrun the rain, so although it was overcast it was still inviting to jump in the river and get clean.

This is a very nice place to stay, just under three hours drive from home. It has beautiful scenery, a river to swim in, clean toilets, and even internet! What more could a man ask for?

Actually, the answer to that is it will be nice to have Felicity back tomorrow. I do have fun on these cycling tours, but when you visit awesome places it is nice to share the experience with someone you love.

One thought on “Waitangi weekend cycling in central North Island”