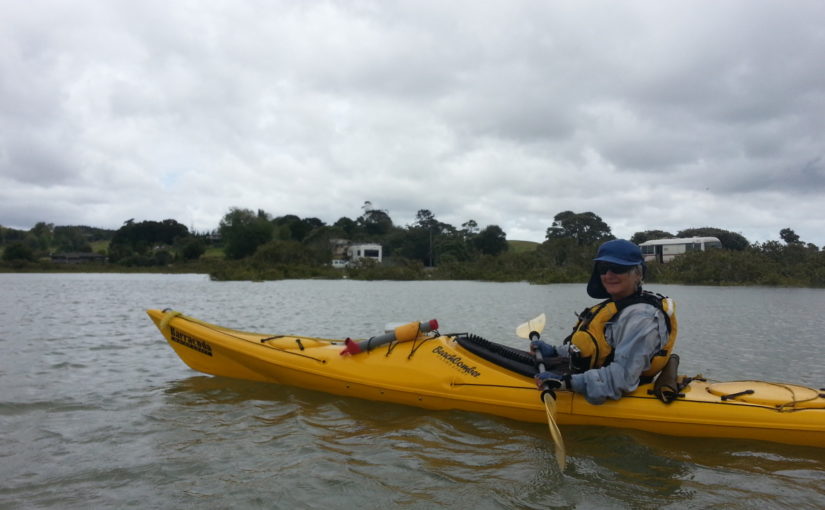 Much of the boundary between Auckland and Northland is marked by the Topuni River, which flows into the Kaipara Harbour. A bridge carrying by State Highway 1 crosses it about half way between Te Hana and Kaiwaka. For ages I have looked at this river as we’ve headed north, and thought it would be fun to explore by kayak.


Self-contained freedom campers are allowed to stay at the Port Albert Domain, right next to the wharf, and since it has a lot of positive reviews on the Campermate App, we decided to spend the weekend there. Since it is almost exactly 1 hours drive from our place in Albany, it seemed ideal for a two-day trip.

A sign near the wharf informed us that the original Albertland settlement was sponsored by a non-conformist (ie: not Church of England) church group in Birmingham, back in 1861. Several shiploads of immigrants arrived, but difficulties with access made farming uneconomic, and the town never prospered.

We parked right next to the mangroves and settled in for the night. After breakfast, we carried our boats to the ramp next to the wharf, and set off upstream. It took us almost two hours to get up as far as the highway, then we managed another kilometre of so before the stream became blocked with willows and we had to turn around. We enjoyed a naked swim in the mostly fresh water, then sat on the bank to eat lunch.

The wind was picking up as we headed back, and it was quite hard work paddling across some of the more exposed areas. The tide was going out (against the wind) by this time, which meant that the water was not as flat as one might prefer. We were both quite glad to see the boats moored next to the wharf where we could get back to dry land and the comfort of the motorhome.

On Sunday morning the sky was looking rather grey, but we were right next to the river with the kayaks still unpacked so it seemed silly to waste the opportunity. We had only been on the water about 20 minutes when the first light shower hit us, followed by several more during the rest of the trip. It was warm though, and we didn’t bother to stop and put on our raincoats.

We paddled past a cute little red-roofed church at Oruawharo, on the northern side of the river. Every now and then we saw the remains of launching ramps and wharfs that probably haven’t been used for a century or more.

The wind started to pick up, so we decided not to continue out into the open waters of Hargreaves Basin. Instead we crossed back to the southern side of the river and explored a creek running down through the mangroves. Near the top we found a spot to land and eat lunch under one of the shady trees laden with tiny red berries that lined the shore. I think they were hawthorns, but I’m now wishing that I bought some home so that I could identify them for sure. Hawthorns are considered a weed, because they are happy to grow in inhospitable conditions, and they form a shady canopy which suppresses other plants.

Once we got back down the creek and into the main river, the wind was behind us and we were blown most of the way home. Because it is full moon, there was king tide and the water had risen right up to the grass next to our vehicle. This meant that instead of using the metalled ramp and carrying the boats back we could paddle right up to where we could lift them onto their racks.

We packed up our gear, enjoyed a cup of tea, and drove home in time for dinner.