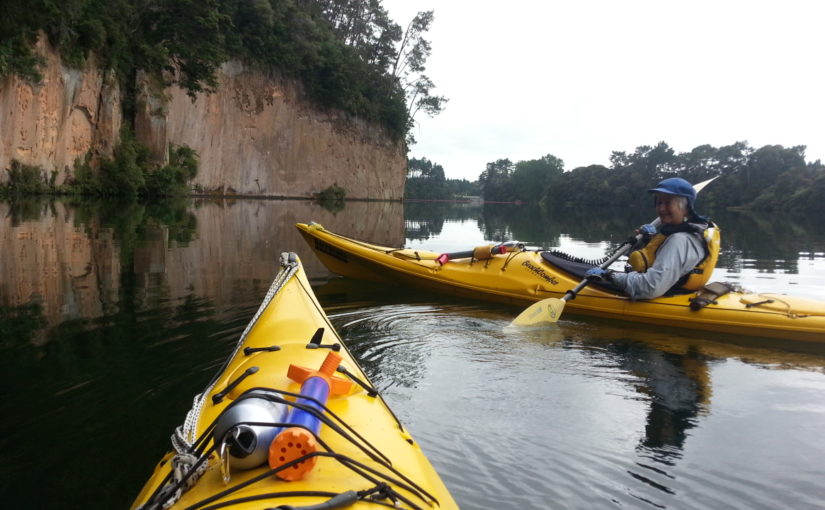 Our cunning plan for Auckland Anniversary weekend was to leave early on Friday afternoon and try and beat the traffic out of town. Fortunately I took a quick look at the online news before we left, and discovered that due to a car on fire near Papakura there were thousands of other keen holiday-goers already parked on the motorway.


So we went for a swim at Long Bay instead, ate dinner at home, and hit the motorway at 8.00pm to find it flowing fast all the way down to the road works at Manukau. We headed for the Te Kauwhata Domain (a bit north of Huntly), and arrived just as it was getting dark. I was expecting to wake up to a view of Lake Waikare, but it took me a while to spot the water in the distance behind factories and warehouses. This place is a convenient stop-over, but isn’t somewhere you would go for a holiday!

It did mean that when we got back on the road straight after breakfast, we didn’t encounter any hold-ups. About half way along Lake Karapiro, we turned off State Highway 1 and crossed the Waikato on the Maungtautari Road. There was an interesting looking lakeside camp-site at Horahora, but we continued south to Arapuni Landing, a couple of kilometres upstream from the hydro dam.

There was a great space free right on the edge of the water, so I manoeuvred the motorhome until it was level, then Felicity packed lunch while I unloaded the kayaks. Unfortunately, the lake was infested with fizz-boats towing water-skiers and inflatable biscuits, so we decided to explore the narrow Mangare Stream that we could see on the map a little way to the south west.

As usual, the last few hundred metres involved pushing through overhanging trees and trying to avoid getting caught in blackberry vines, but we finally found a flat section of bank to land and eat a picnic lunch. On the way back, I checked out a peach and a nectarine tree at the edge of the water, but alas, none of the fruit was ripe.

It was still early afternoon when we arrived back at the vehicle, so we flopped into the water for a swim, then spent the rest of the day reading and relaxing. Just before dinner we went for a little wander around the reserve, while all the day visitors packed away their noisy boats and headed home.

Next morning the lake was still and mirror-like, so we paddled off north towards the dam. This section of the river has high, rocky bluffs which we could often paddle right beneath. We explored a couple of short side-streams, one of which had a pretty waterfall flowing into it.

When we arrived at Arapuni Landing on Saturday, we saw a guy swim past towing a small catamaran with gear piled on top. Later on that day we saw him swimming back in the opposite direction. After our second kayak trip on Sunday, we had just enjoyed a swim and were standing on the beach when the swimmer appeared again, came straight into shore and stopped for an energy drink.

We talked to Craig McKibbin, and he told us he was training for an 8 day unsupported swim around the perimeter of Lake Waikeremoana, starting on 8th February. He told me he tries to stay about 200 metres from the shoreline at all times. Craig is raising funds for a local charity, and has all his gear and supplies sponsored by supportive businesses.

He had seen the catamaran used by someone who swam around Taupo, and was given the use of it when he requested design details from the owner. It was built by making a form from polystyrene, fibre-glassing over the top, then carving out all the polystyrene with a knife and fork to make watertight compartments. Craig reckons the raft is almost unnoticeable when fastened to his waist belt, even when loaded with ten days food.

While we were eating lunch back at the motorhome, a large and noisy family in a truck reversed into our private little valley and extended an awning right near our spot. The driver cheerfully told me that a second van was about to join them. It seemed like a good time to leave.

After stopping for diesel in Te Awamutu, Felicity consulted Google to see if there were any interesting walks in the vicinity. We were directed to Kakepuku Mountain, where a shared walking/cycling track climbs to the top of an ancient volcano. I thought I could just about manage to ride up the steep hill, but that it wouldn’t be worth the effort because the downhill would have to be with the brakes on most of the way.

It was great to walk though, with a mostly graded track climbing to a set of stairs leading to the 449 metre summit. This maunga is part of the Alexandra Volcanic Group that stretches through Pirongia to the coast at Kawhia, where hot water springs still bubble up on the beach.

Four Maori pa sites are hidden in the bush. There are supposed to be peach and fig trees growing right up to the summit, but we didn’t spot any. A sign at the top informed us that this pa was never conquered by invading tribes. Judging by how tired I felt when I reached the top, it is hard to imagine any attacker being in a fit state to fight a battle!

As Felicity had work to do in preparation for a trip to Australia tomorrow, we decided to spend last night closer to Auckland, so that we could zip up the motorway with no chance of congestion today. I drove us to near the Tuakau Bridge where I have stayed in the past, so we were able to enjoy a last dip in the Waikato before making dinner. There was quite a big crowd of water sport enthusiasts when we arrived, but as dusk arrived they packed up and left us in peace.

One thought on “Arapuni Landing”