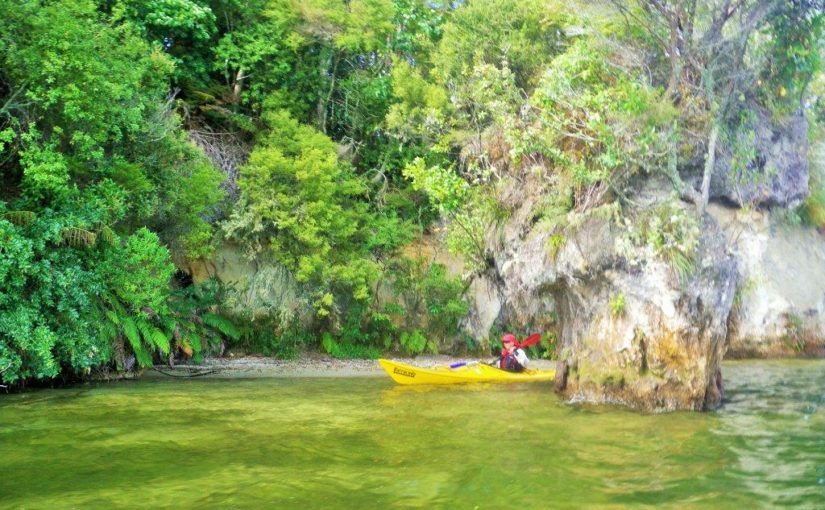 As Felicity has an event in Whakatane to attend on Monday, we decided to drive down on Friday and spend the weekend in the area. We were keen on a paddle in our kayaks, but the weather on Friday was looking a bit wild so we headed for Lake Okareka, just to the west of Lake Tarawera, in the hope that it would be relatively sheltered.


It looked like there was rain coming, so we decided to walk along the Western Okataina Walkway instead of going out on the lake. This track is also a bike trail, but I decided that it would be best to make sure it is dry before attempting it on two wheels, as it was fairly rough and slippery.

The walkway follows an old logging road, but it must have been made a fair while ago because the surrounding bush is quite mature, predominantly tawa as far as I could see. There was a bit of rain, but it was not at all cold, so wearing our ponchos made us sweat so much they didn’t keep us particularly dry. We climbed steadily for an hour or so, then when the track began to descend we turned around.

At the top of the hill I heard several long-tail cuckoos calling to each other, recognising the sound from seeing them on the Timber Trail in the Pureora forest. After a bit of patient watching, I was able to spot one in the treetops and point it out to Felicity.

On Saturday morning we launched the kayaks and set off around the lake in an anti-clockwise direction. I figured that the wind would get stronger during the morning and that we would be best to return along the more sheltered north-eastern shore. I had vaguely remembered that there were small caves to paddle through, but it was better than I remembered, and I made a mental note that this would be a good place to bring overseas visitors that we want to impress.

After lunch we packed up and drove to a campground neat Galatea on the shore of Lake Aniwhenua. This is a man-made hydro lake behind a dam on the Rangataiki River, and looks like it could be an interesting place to kayak. Unfortunately, by the time we arrived it was raining hard, so we spent the rest of the afternoon reading in the motorhome.

Just as we were starting to think about dinner, we noticed that the rain had eased up, so we went for a walk across the dam and along the side of a canal diverting most of the river to the power station. There is still a tiny amount of water flowing in the old riverbed, apparently just enough to allow eels and fish to migrate upstream.

It rained steadily all night, and when I looked out and saw the vehicle was surrounded by deep puddles I was glad to know I had 4 wheel drive available to get us back to the road.

It was still raining in the morning, so we embarked on what turned out to be a wild goose chase hunting for the Savage Hot Springs in the forest near Kawerau. Felicity had found a video on Youtube which looked very inviting, but the only directions were a GPS co-ordinate on another website. After many kilometers of driving down metal roads we found ourselves in the middle of a pine forest with no sign of any springs.

At the information center in Kawerau we learned that the springs are nowhere near where we were looking, and are on private property behind a locked gate, and not open to the public. Fortunately Kawerau has free hot pools right in the town centre, so we enjoyed a hot soak anyway.

Just beyond Whakatane there is a great camping spot in the Otao Domain at the end of the Ohope Spit. The clouds had blown away by this time, so after lunch we went for a walk along to the end of the spit and back down part of Ohope beach. On our way back though the sand dunes to the harbour side of the spit, we found hordes of ripe blackberries, so we ate as many as we could manage.

We were hot and sweaty by the time we got back to the van, so we plunged into the harbour to cool off. I was just about to dry myself off when I noticed a couple of large, deep puddles in the middle of the camping area. The fresh water in them had become quite warm in the hot sun, so we ignored our fellow campers and wallowed around in them rinsing off the salt.

We had hoped to go for a paddle on Ohope harbour, but despite the sunshine it is very windy so we will have to come back and do this another time.

One thought on “Powhiri in Whakatane”