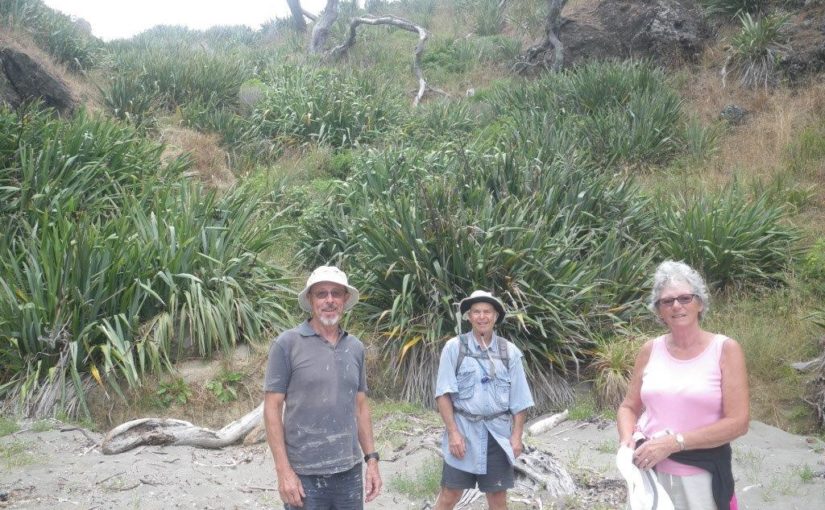 Our friends Tannis and Mike have built a new house since we last visited them, so we were interested to see the changes. When we drove past a few months ago we looked up from the road and couldn’t see a thing, so the building blends into the landscape pretty effectively.


We travelled north on Friday, stopping for lunch at Helena Bay on the way. When we arrived a bit after 2.00pm, our hosts were just sitting down at an outside table to eat their lunch, so we sat and caught up on news until it was time for the guided tour.

They have built in mud brick, which looks very attractive but sounds like it was a lot of effort. The place is still a building site, so I can see they will be busy doing finishing work for quite some time yet.

After we had finished showing them our new motorhome we walked down to the beach for a swim, then rinsed off in the fresh-water creek. We had our dinner outside in front of the flash new house, cooking on the open fire and drinking wine under the pohutukawa trees.

When it got dark, we walked down to the beach with a box of fireworks left over from Guy Fawkes, and Mike set them off at the edge of the water where there was no chance of setting fire to anything. They had a scare a couple of weeks ago when a couple of tourists pulled in to their driveway in a rental car and got out just before it burst into flames. Fortunately the local fire brigade arrived just as the overhanging trees were starting to catch, and disaster was narrowly averted.

Felicity and I were keen for some exercise on Saturday morning, so we pulled on our boots and backpacks and climbed over 200 metres up the steep hill behind the bay. It was hot and sweaty work, but we were rewarded with fantastic views out towards Whangamumu and Cape Brett to the north, and the Bay of Islands’ Te Rawhiti Inlet to the north west.

At the summit, we rested on the grass in the shade of some ti-tree and watched small birds flittering about the canopy. A flock of grey warblers identified themselves by their song. The bird in Felicity’s photo is a North Island tomtit, or miromiro.

We had a quick dip in the sea, discovering that the previously clear water was now thick with jellyfish, in several different varieties. It was a bit like swimming in tapioca pudding! We then returned to the house for a well-earned lunch.

We were a little too far from the house to pick up their wifi successfully, so Mike kindly ran a spare network cable down the drive and loaned us an access point. Felicity had a bit of work to do, so we spent a couple of hours on our respective devices.

The tide was out in the late afternoon, so the four of us took wetsuits and snorkelling gear to see what we could see under the water. Thankfully, the jellyfish thinned out as we got further from the shore, else we wouldn’t have seen much at all.

There weren’t huge numbers of fish, but enough to keep us amused as we swam out and around the rocky reef in front of the beach. I saw several red moki, and a school of piper, but the highlight was a big group of pretty blue New Zealand demoiselles

, which didn’t pay us much attention.

There were no snapper to be seen though, and large numbers of kina busy destroying the kelp beds as a result. There also weren’t any mussels, which used to be plentiful here until a few years ago when a single boat cleaned out the entire population. Even if there had been we couldn’t have eaten them because of a toxic bloom on this part of the coast at the moment.

We spent another pleasant evening in front of the campfire, eating their famous Taupiri smoked chicken, which is cooked by rotating it on the top of the short chimney at the back of the fireplace. The full moon rising over the sea was such a beautiful sight that we ended up opening a second bottle of wine, then following that with a slurp of damson plum infused gin before staggering (only slightly) off to bed.

On the Sunday the four of us walked north up the coast, along Elliot Bay and over the headland to Pahi Bay. We eventually came to a rocky outcrop where the waves were rushing up a couple of narrow channels and smashing into a sheer cliff. We could have crossed if we had been prepared to get wet, and we probably could have climbed up the hill and bypassed the obstacle, but it was getting toward lunchtime so we turned around and headed home.

It was quite late before we got ourselves packed and on the road. We stopped to make coffee at a viewpoint just south of Whangarei, then continued south in moderately heavy but free-flowing traffic. Nethertheless we realised that if we waited to get home our dinner would be very late, so we stopped at Warkworth and parked at the edge of the river to cook in the vehicle.

While we were eating, we heard a loud siren sounding from the nearby fire station, and I wondered if there had been a road crash. Sure enough, not far out of town we came to a long line of stopped traffic, and had to crawl along in first gear for about half an hour until we got to the crash site at the top of the Pohuehue viaduct. According to the radio news, it was a single vehicle accident, and the male driver managed to get “thrown from the car”.

Once we were past the single lane section the traffic started flowing again, and we arrived home just before dark.

3 thoughts on “Weekend at Taupiri Bay”