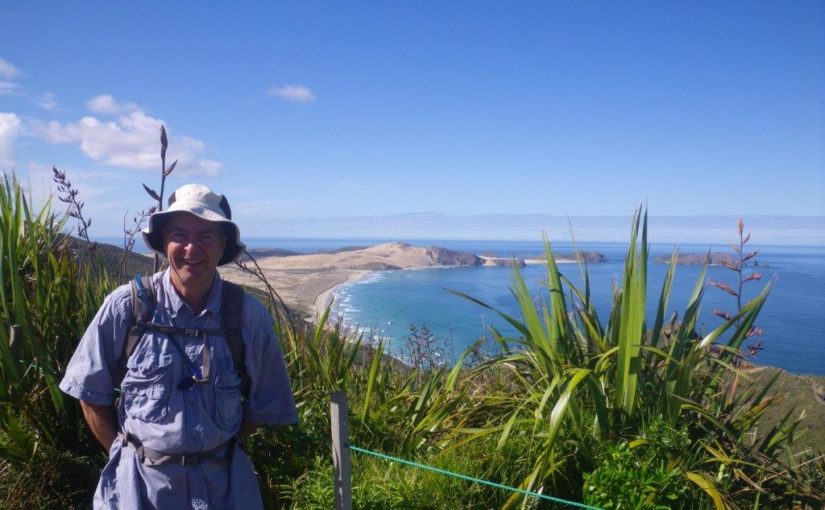 Despite our advice to nephew Ben that Northland would be hellish between Christmas and New Year, we had a couple of visitors from West Island with us who were keen to spend the week in a tropical climate, so we went anyway. Felicity and I were in the motorhome, while Robyn and Gary drove my X-trail with our double kayak on the roof.

Near the end of the Karekari peninsular is a newish DOC campsite at the bottom of beautiful Matai Bay. We were pretty hot when we arrived, so after a walk out to the headlined we flopped into the water, which was a couple of degrees warmer than it has been in Auckland.

Next morning we went kayaking up the coast to the north. We didn’t get quite to the end of the peninsular because the wind was starting to pick up and I wasn’t sure about our companions’ fitness levels.

After lunch three of us went snorkelling. Considering the number of keen fishermen in the camp, I was surprised by the number of fish we saw. There were no snapper though, and as a result there were large areas barren of seaweed because of grazing kina. On the way back to the beach I swam past a school of what I think were young trevally – hundreds and hundreds of them.

We drove further north and turned off down a bumpy metal road just before Cape Reinga. The Ranger is fun to drive on rough roads, especially when we remember to shut all the windows and vents to prevent a thick layer of dust settling over everything. We found a lovely spot under a pohutakawa tree beside the creek at the Kapowairua campsite. It was a fraction too close to the composting toilets, but nice to have the water right next to us to jump into.

Felicity and Robyn were keen to collect mussels from the rocks at the western end of the bay, so we trudged along a 4WD track behind the dunes for an hour or so to get there. We left the track just before the board-walk across the Waitahora Lagoon to Pandora, and followed the beach to the rocky cliffs. It had started to rain by this time, but we pulled on our ponchos and started hunting and gathering. The tide was a little bit too high, but we eventually got enough shellfish to feed the four of us.

It was a long walk home down the length of the beach. My calves were quite sore from walking in the soft sand. Back at the motorhome, Felicity cooked up some delicious fritters so it was worth the effort.

The rain didn’t come to much, so the next day we kayaked up the creek as far as we could get. There was a big herd of horses in the paddock, and one walked over a low bridge in front of us and looked very interested in us visitors down in the creek

We left the next morning, and took a detour up to the Cape Reinga lighthouse before heading south. The road is sealed all the way these days, which makes it much easier for the tourist hordes. We drove down to the campsite at Tapotupoto Beach for a look, but it was almost totally packed and we decided it would be better to return another time.

The path out to the lighthouse is very attractive, and had a number of interesting information panels telling us about the history and environment.

Felicity had been told that the campsite at Rarawa Beach is never full, but when we got there we were a bit concerned until we discovered a spot right at the back at the edge of the Ngataki Stream. We walked out to the beach, but ended up swimming in the river next to our vehicles.

We explored up and own the stream in the kayaks next day, seeing dozens of shags in the trees hanging out over the water. We had to take care not to get directly underneath, because if they get the slightest bit nervous they empty the contents of their stomach in preparation for a quick take-off.

There is a campsite marked at Raetea North Side, but it looked overgrown and unattractive when we arrived, so we continued down the road to a rest area just before the Mangamuka Soda Springs. This turned out to be a lovely spot to camp, on the edge of a deep pool perfect for swimming.

We walked back down the highway to look for the soda springs, and finally found a small overgrown trail leading down to the river. When we got there we found concrete steps and the remains of what looks like a weir or bridge. The water entering the stream from the banks looked rather unappealing, with a very high iron content making it bright orange/red. Although I’m sure it has miraculous healing properties we all felt well enough to give it a miss.

On our way back south, we stopped at Hikurangi for a swim in the hot sun at Lake Waro, then ate lunch in the camper.

It got cloudier as we continued, and by Wellsford it was raining steadily. We had decided to drive back to Auckland the day before the end of the holiday break, but it still took us more than four hours to get from Whangarei to Auckland. We took the recommended detour down State Highway 16, but it was still nose-to-tail most of the way.

One thought on “Far North for New Year”