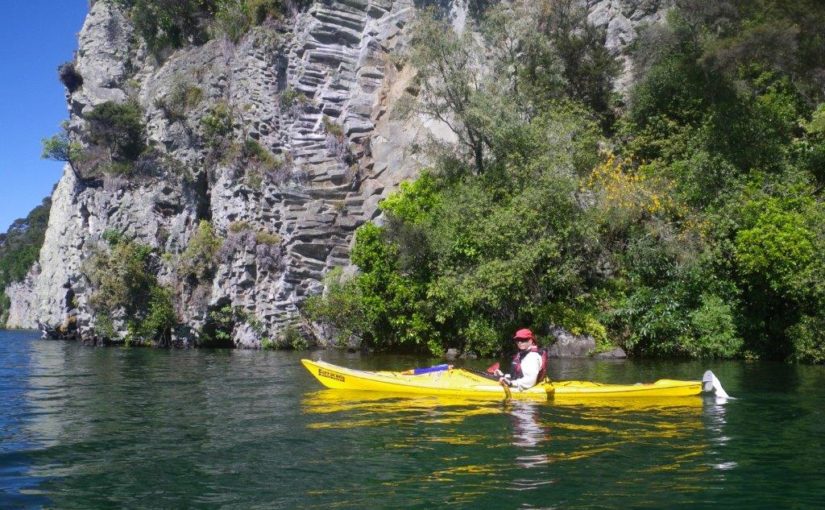 This Labour Day holiday we were well-organised – I hadn’t unloaded the kayak gear from last weekend – so we escaped the city late morning on Friday, heading south. By the time we reached Otorahonga we were ready for lunch, so we stopped at the Haurua rest area. This is the start of the King Country, and there is a memorial stone marking the spot where the first Māori king met with the Ngāti Maniapoto chiefs in 1857 to get their support. Europeans could not enter this area for the next quarter of a century. Fortunately for us the locals tolerate pakeha tourists these days.


After eating, we looked at the map and the camper-mate app to plan our next move. One of the things that I really like about being in a motorhome is that you don’t need to organise ahead – you can just drive off down the road with no idea where you might end up. I had done just about enough driving by this time, so when we saw there is a free camp-site at Mangaokewa Gorge just south of Te Kuiti we checked it out and decided to stay.

There was an inviting swing-bridge leading across the river, so we put on our boots and packs and set of for a walk. This track turned out to be part of the Te Araroa Trail according to signs, although my route map (which must be out of date) shows the trail heading down the nearby highway. The bush in this area is very different from the sub-tropical north. The big giants are mostly rimu and totara, and the main canopy tree is tawa. We enjoyed walking up the gorge beside the river to a waterfall and back.

Unfortunately neither the map at the start of the track, nor the track signage show that we could have continued for another kilometre or so to another bridge and walked back on the western side of the river. A couple of German tourists who we saw heading on from the waterfall popped out of the bush next to our van about half an hour after we got back. They obviously had better intell than us. No worries though, we can come back another time.

On Saturday morning we continued south to Taupo, and visited my nephew and his partner to meet the latest addition to the Potter family. The rent on their nice house would be lucky to pay for a garage in Auckland. I’m impressed by my nephew working 50 hours a week pumping petrol for minimum wage to support his family. Pump attendant was my second job, too.

After lunch, we parked at the end of Spa Road and joined the tourists in the natural hot pools on the edge of the Waikato. A hot waterfall gushes over the rocks at just the right temperature for soaking. There is a bit of gunge and sand in the water, so when we were thoroughly cooked we dipped (briefly) into the cold water to wash ourselves clean.

Felicity went into the Taupo information centre to enquire about kayaking destinations, and they recommended we paddle along the headland between Acacia Bay and Kinloch. This particular headland has an awesome mountain-bike track which is part of the Great Lake Trail, so this seemed like a great idea to me. There is a free camp at Whakaipo Bay where the trail starts, so we found ourselves a great spot right next to the lake. The word whakaipo translates as: “to court, woo, treat with affection, cherish”.

If you look at the photo I took of Felicity at work in the back of the van, you can see the lake was quite choppy – not ideal kayaking conditions. We enjoyed hearing the waves breaking on the beach as we went off to sleep, but it was a relief to wake up on Sunday morning to find the wind was dropping fast and the water was calm. Above my head in the photo of us about to launch is a magnificent view of snow-capped Ruapehu, but unfortunately the white snow against a pale sky didn’t show up.

There were hundreds of beautiful golden kowhai trees to admire on the hillsides above us, and some very interesting rock formations on the Whangamata Bluffs near the end of the headland. There were a few places where large chunks of rock had tumbled into the lake, and sometimes I could paddle behind them. The lake water was impressively clean.

After lunch I biked and Felicity walked up the track to Kinloch. She turned around at the 7km half-way marker, but I continued on for another kilometre and turned onto the 9.5km Headland Loop. It was a good feeling zooming along the top of the 500m cliffs I had been kayaking under in the morning. I rode a couple of side-tracks to lookouts where I took selfies. The first is looking back to Whakaipo Bay, and the second is with the town of Kinloch in the distance.

Once again I was riding my hardtail, because the full-suspension bike is being serviced. It would have been much more fun and comfortable on the long, flowy descent back to sea level, but the old Kona can still give me a few thrills. I kept having to remind myself that it is a two-way, shared-with-pedestrians trail, and to watch out for people around blind corners. I’m guilty of a few skids while avoiding disaster. A bike hurtling towards you down a hill with limited traction is probably not what you want to hear when you are climbing up!

I caught up with Felicity without bowling her over, and we exchanged notes. She had about 40-50 minutes to walk, whereas I would ride it in under quarter of an hour.

I was hot enough when I reached the van to strip off my gear, grab a towel an dive into the lake. It’s my first swim of the season, although I have to admit it didn’t last long. I felt refreshed and clean afterwards, with just a few tired muscles.

Felicity had her heart set on trying out the motorhome’s outside shower, which plugs into the hot water system, so I couldn’t convince her to jump in the lake. We were both worn out after our active day, so we moved back into the same spot at the water’s edge for a second night.

On our way back north today we stopped to look at Hamilton Gardens. We visited years ago with Judith, but I suspect we only saw a small section of it. We spent about an hour and a half walking around the various enclosed gardens, which re-create garden styles from around the world and throughout history. A usual I found the food plants the most interesting. Who would have thought you could grow taro and bananas in the Waikato? We were hungry after this, and decided to leave the rest of the gardens for another trip.