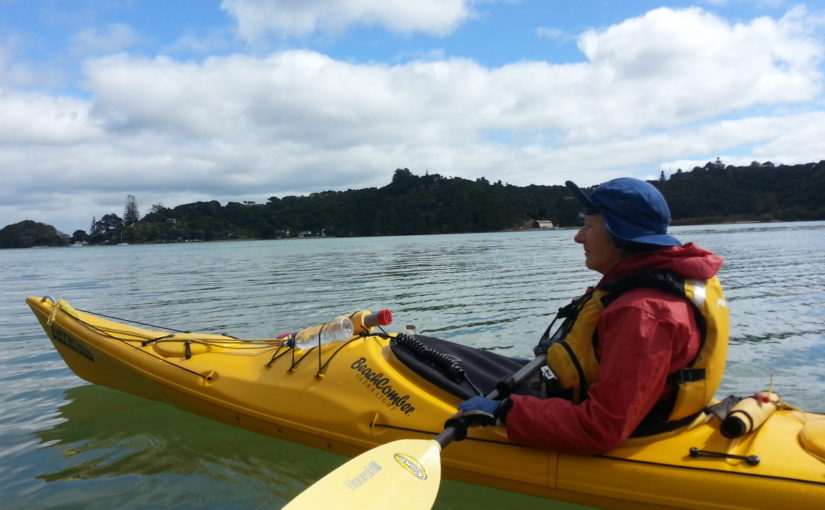 Felicity has a function to attend in Whangarei on Monday, so we decided to spend the weekend up north in the motorhome. As usual we didn’t have much of a plan when we left home, but as we neared Wellsford she rang our friends Lannes and Linda in the Bay of Islands, and received an invitation to park in their driveway overnight.


We arrived early afternoon, so after a bit of a catch-up and a cup of tea we set off along a public track that passes the bottom of their property. We chose the direction with lots of steps which is stage two and some of stage three of the Bay of Islands Coastal Walkway. Some of the track was through pines which weren’t very interesting, but later on we passed through sections of native trees. There were several signs telling us that kiwi live in this bush.

After a very pleasant evening eating good food and drinking wine, it was very convenient to have our bed just outside the house. It was so peaceful that we slept in till almost 8.00 am. After breakfast we drove to the end of Te Wahapu Rd and unloaded the kayaks. By this time the wind was starting to pick up a bit, and there was only just enough tide to slip through the channel between Toretore and the mainland.

Paddling up the northern side of the island was very easy, but as we rounded the point the going became a bit harder because of the wind blowing from the south. We continued paddling around the sheltered Te Wahapu Inlet, but as soon as we reached the exposed area at the end it stopped being so much fun.

The island is quite small, but it has a well-formed track along the top of the steep ridge. A painting from around 1850 shows the island had been completely cleared for farming, but now there are large pohutukawa and totara making a complete canopy. At the end of the track is a great viewpoint, from where you can see Pahia to the west and Russell to the east.

By the time we had the kayaks loaded again we were ready for lunch, so we drove back to Lannes and Linda’s. He had kindly called in at the local oyster farm to give us a taste of the local produce which grow in the bay below their house. They were fat and juicy and delicious with just a squeeze of lemon and some black pepper.

We said goodbye and drove south to Whangarei. The Campermate app led us to a lovely spot at Elliot’s Reserve behind the Aquatic Centre, right on the edge of the Hatea River. After coffee we went for a stroll along a boardwalk through the mangroves, then up a couple of alleyways and back via suburban streets. On the way we stopped to harvest and pig out on some ripe loquats. I do enjoy free food!

On Monday morning I dropped Felicity at the Northtec Marae where she had a powhiri to attend, drove to the top of Mount Parihaka, and parked near the memorial. I had been planning a fairly tame bike ride on concrete around the river, but since there has been a bit of sun in the last few days I figured the singletrack at Parihaka might be worth exploring.

Most of the trails are rated “advanced”, and they are obviously built to be ridden fast, with high berms and flowing corners. I was riding my old hard-tail, and I noticed how much harder it is to stay in control when your back wheel is in the air so much of the time. The track surface was quite hard, a testament to good drainage, but in a few shaded spots it was rather greasy. I had a few heart-stopping moments when I doubted I was going to be able to slow down enough to get around the next corner.

By the time I got back to the top of the hill, it was after 12.30, and time to head back to pick up Felicity. I arrived at Northtec only 2 minutes late, then got to relax in the back of the motorhome drinking tea for the 45 minutes it took her to make her escape.

I had an interesting experience driving home. At 100 km/hr I was approaching a culvert with armco barriers along both sides of the road, making the highway just wide enough for two vehicles to safely pass. I could see a guy walking on the far side of the road from me pushing a bike and decided to slow down considerably to let him get clear in case a vehicle coming the other way strayed over the centerline. At that moment the driver of a large truck and trailer unit a few cars back coming towards me made the same calculation, and slammed on his brakes, locking up his wheels. Clouds of black smoke billowed out. I had a sudden vision of him going sideways onto my side of the road, and came to almost a complete stop before I realised he had kept it in a straight line.

So I’ve enjoyed several near-death experiences at the end of a relaxing weekend away.