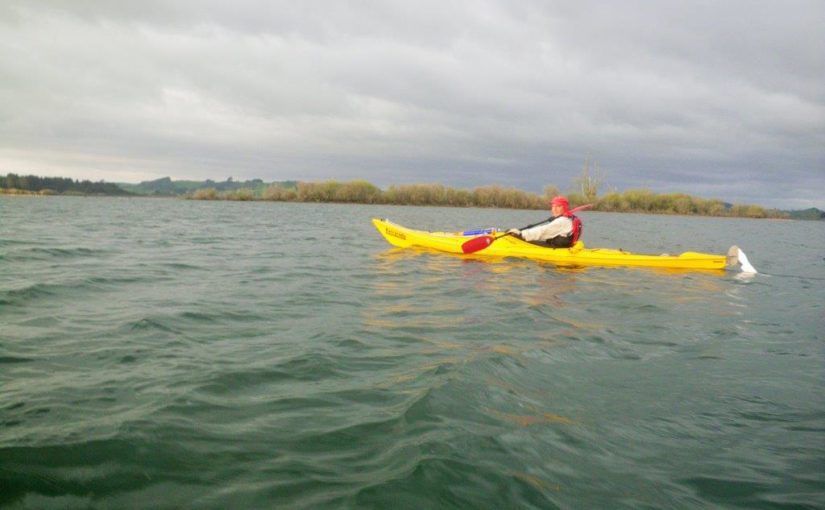 After abandoning our plans to go away in the camper last week due to the horrible weather, we committed ourselves this weekend no matter what. I loaded the kayaks on Thursday so by late morning Friday we were ready to hit the road south, way before any motorway traffic to slow us down.

The only slight problem was that yet again we were short on cheese. A first-world problem to be sure, but needing to be rectified nonetheless.

After our good experience with Mahoe Farmhouse Cheese up north, I did a quick Google search and discovered a factory in Hamilton called Cilantro Artisan Cheese which seemed worth a visit.

Google navigated us to Bisley Rd, which turned out to be in the middle of the old government Ruakura Research Centre. This was very interesting to visit and we were both surprised by how huge it is. Many different private businesses rent space here now that research is not something NZ governments do. There was no sign of a cheese factory though, and when we asked at the cafe they told us they had never heard of it. Felicity finally found a guy who reckoned he knew, but he said we would have to go out the way we had come, drive up the highway for a few kilometres, then enter Ruakura by another gate. We followed these directions, and soon were right back where we had started – Bisley road runs from one gate to the other!

The directions had stated the factory was “opposite the Chiefs”, so we drove around their building a second time and noticed a tiny sign next to what looked like a fire exit. There wasn’t even a path across the grass. When we knocked though, a friendly woman invited us in and we were immediately surrounded by stainless steel vats, trays and other cheese-making equipment. Jenny introduced us to her partner and the factory worker, and went to look in a tiny fridge to see if they had anything for sale.

Most of their cheese is made from goat’s milk, so we bought four different varieties, including one blue cheese that caught a “natural” spore when it was maturing inside their cheese “cave”. I had visions of a secret underground cavern, but it turned out the cave was an old industrial refrigeration unit bolted to the outside of the building. So far we have eaten a delicious soft, white chevre which they are about to make a huge order of for lucky “My Food Bag” customers.

With our cheese supply secure, we continued south, and stopped at Lake Karapiro for what was by then a late lunch. We kept following the Waikato up-river, and finally halted for the night at the Whakamaru Reserve, right on the riverbank. The Waikato bike trail runs through here, so we walked south for about 50 minutes enjoying the scenery. I have ridden my bike on this trail in the past, but on Friday it was wet and slippery, and more enjoyable on foot.

After a rather slow start – which involved fitting car seat covers to protect our new upholstery, we drove to the Orakei Korako jetty on Lake Ohakuri where the tourist boats cross the river to visit the thermal area. We launched our kayaks and paddled happily along in the sunshine under steaming cliffs and beside gurgling vents.

There is a natural hot pool on the side of the river where we have enjoyed a soak in the past, but when we climbed up the small waterfall we discovered that the lower pool had been broken by floods and/or rock falls, and the way up to the upper pool was too slippery and dangerous to access. We were bashing around in the bush semi-naked when a huge jet-boat full of tourists roared in and watched us in amusement for a while. Felicity’s photo is probably ‘going viral’ on social media as you read this.

We got back in the kayaks and paddled back down river, past our launch spot, and past the Rotota Sun Club. There were no nudists out and about today, even though the sun was shining. We parked the kayaks on some mud at the end of a small stream, stripped down to our togs and set off up “the squeeze”, with me carrying lunch in a waterproof bag. This stream is usually quite warm, and leads to a hot waterfall beside a pleasant picnic spot.

Alas, the best laid plans of mice and men… I noticed as soon as I started that what I remember as thigh-deep water was over my waist. The temperature, while not as cold as the water in the lake, was not even tepid, let alone warm. We stubbornly set off up the narrow rocky canyon anyway, fighting against quite a strong current that also didn’t feature in previous visits. At times I was in water up to my neck, with the lunch bag balanced precariously on my head.

As the creek is surrounded by dense bush, there was no sun and I began to get colder and colder. I was so looking forward to getting warm again under the waterfall, so it was quite a blow to reach it and discover it was only lukewarm. By now I was shivering and my teeth were beginning to chatter, so we gave away any thoughts of picnic lunches and set of back to the kayaks as fast as we could go. Fortunately the current helped our progress, so it wasn’t too long before we were drying off and putting on warm clothes.

We considered stopping at the sun club for our picnic, but the sky had become cloudy and we could see our comfortable motorhome a few hundred metres away on the other side of the Waikato. It wasn’t long before we were sitting inside warm and dry again.

Felicity searched online for a real hot pool, and discovered one on the way to Rotorua called Butcher’s Pool. It was only a 20 minute drive so we followed the directions and discovered an attractive, wooden-sided pool up a small country road. I went and tested the water before getting back into my wet togs, and decided that it was about 39º – just about perfect. We stayed there for quite a while, talking to a local Maori guy about natural hot springs in the area. He told us that up until the mid 1980s it would have been unacceptable to wear any clothing in a Maori hot pool.

Another pakeha guy in the pool recommended we check out a camping area on the shore of Lake Rerewakaatiu, which is at the base of Mt Tarawera off the road to Murapara. We ended up parked on the gravel and pumice a few metres from the water with a million dollar view.

When we woke in the morning and realised the forecast rain had not yet arrived, we decided to go for a paddle. I unloaded the gear while Felicity organised breakfast, so we were on the water about 7.45 am. The sun was trying to come out at first, but the clouds grew thicker as we paddled around the edge of this pretty little lake. At the southern end the wind was quite strong, and it wasn’t until we crossed back to the western side that we found calm water again. The first raindrops fell as we were approaching the beach to land, so our timing was perfect.

It seemed silly not to enjoy another hot soak before we left the area, so Felicity asked Google to direct us to the Polynesian Spa, which she has been wanting to go to since we paddled past the lake-front pools early last year. This turned out to be the first time “she” has put us wrong – we ended up at in an industrial area on the other side of town, looking for a hot-tub manufacturer. This was rather dumb because I know very well how to get to the public baths which are at the end of one of the main streets.

The rain stopped for a while as we relaxed in the pool, and at one point I even began to think I should have bought a sun hat. The “unique blend of minerals” is very therapeutic apparently. The baths have been beautifully landscaped and we were able to watch a colony of red-billed gulls sorting out their pecking order, sometimes by actually pecking each other when subservience was not displayed fast enough.

We decided to drive a while before stopping for lunch, which we ate at the Fitzgerald Glade, on the northern side of the Mamaku Ranges not far from Tirau.