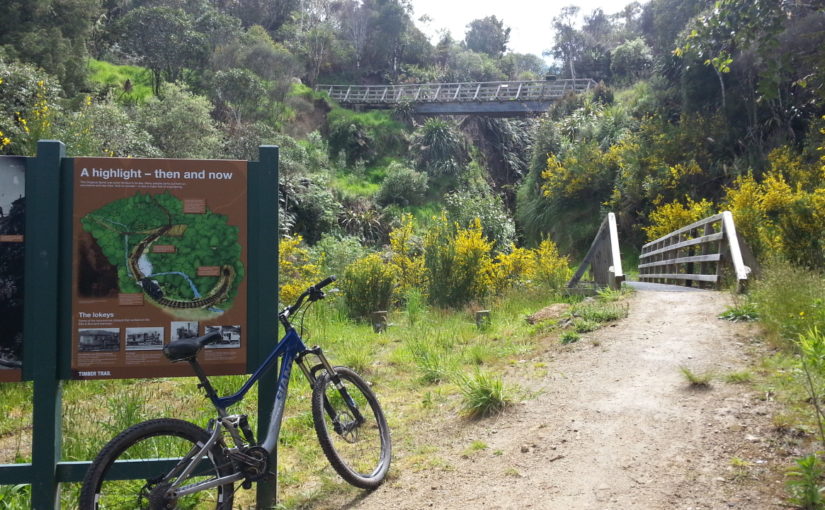 Since I read about the opening of the Pureora Timber Trail almost exactly four years ago I have been itching to ride it, and with Felicity away overseas at a conference I finally got my opportunity. The trail is 85km long, and while some truly hard bastards ride it in one go, most take two days with an overnight camp in the middle.


When I looked closely at the map, and realised I could drive the motorhome to the Piropiro campsite in the middle, I came up with a cunning plan that would allow me to return to the vehicle each night where a warm shower and comfortable bed awaited. This involved riding each quarter of the trail in both directions, which turned out to be another bonus because every long hill you slog your way up on a bike is a thrilling and effortless blast back down.

I spent the night at Mangaokewa Gorge just south of Te Kuiti, where I knew I would be able to get internet. I managed to have a Skype with Felicity which worked well. After breakfast I had less than an hour’s drive to the trail.

Normally it is advisable to ride north to south because it is more downhill in that direction, but since that didn’t matter to me I decided to start in the south where there is no camping area. Not officially anyway, but I don’t imagine a self contained vehicle would run in to problems staying at the carpark.

I took the obligitory selfie at the welcome sign and set off. After no more than a hundred metres the road ended and I could see no sign of any track – which didn’t bode well considering I was about to head into a fairly remote area. There was a large map of the trail on a signboard, but the actual start was covered in a large dot marked “you are here”, which I already knew. I rode in circles for a few minutes looking carefully at every driveway and eventually decided to head back to town and ask for assistance. It didn’t take long to see a trail marker and I realised that the start sign was simply facing the wrong way.

After a few kilometres of sealed road, and another couple on tracks past a farm, I came to where a logging tramway used to bring mostly totara from the hills above down to the mill. This was great to ride on because it was not too steep, with no tight turns. The construction of these old trails is quite amazing, considering it was mostly done by pick and shovel, with the help of dynamite on the rocky sections.

At one point there is an amazing spiral, where the tramway goes under a bridge, through a tunnel, curves around the back of a hill then crosses the high bridge. For many years this was derelict, and a stream ran through the tunnel doing untold damage, but it was all repaired when the bike trail was built.

DOC has also built a number of wire swing bridges to replace the wooden trestles which used to carry the rails across rivers and gorges. It’s a strange feeling riding on ground that gently undulates under you. I stopped at Camp 10 for lunch, and considered turning around, but I was enjoying myself so much I decided to ride another 6 km to Camp 11.

This section is probably the most attractive section of bush, presumably because it was logged first and has had most time to regenerate. I found myself singing the Small Faces song Itchycoo Park – “it’s all too beautiful”.

I met about a dozen riders coming the other way, and hoped that they would be far ahead before I started back down the long hill. As I had carefully read each sign and looked at each attraction on the way up, I intended to descend at full speed and didn’t want to do a lot of overtaking. Even though I sat for a while at Camp 11, it was less than an hour before I caught up with them – fortunately they had stopped for a rest and was able to zoom past without problems.

The Piropiro campsite is huge, and there are several shelters with woodstoves where you could cook out of the rain. I went to the creek to fill the solar shower, but the sun was hot so I stripped off and had a quick wash in the cold water. No internet or cellphone coverage in this remote area, and I was pretty tired so I was glad to have an excuse for not writing this blog.

Next morning the sky was clear and I figured it was going to be a hot day. I decided to continue north, and to complete the southern section the next day as it was quite a bit shorter. I wasn’t even out of sight of the motorhome when my rear tyre punctured, spraying me with sealant. It did its job though and sealed itself back up. It made me a bit nervous knowing I was about to ride 25km into a remote alpine environment, so I stopped and unpacked my bag to re-assure myself that I had a spare tube if necessary.

The trail in this area follows logging roads – some still in use – but I didn’t see any other traffic. I climbed nearly to the top of Mt Pureora before stopping for lunch and turning around. Some of the higher elevations don’t seem to have been logged, so there were some impressive giant trees to admire.

Besides the logging concessions, there were other areas of the forest reserved for contractors to split fence posts. Totara was popular for this because it splits straight and easily. At one place there is the remains of an old hut built inside the stump of one of the giant trees, where three of these guys used to live.

By the time I arrived back at camp, the solar shower was nice and warm so I was soon clean and refreshed and enjoying a well-earned dinner.

I set off south in the morning, and climbed to the Maramataha Bridge. This is the longest on the Timber Trail, and crosses a deep gorge that marks a division through the Pureora Forest. South of the river is where the network of tram tracks used bush locomotives to extract the timber, but they couldn’t get across the river. The northern area was logged later, and used bulldozers and trucks.

When I stopped for lunch and looked closely at the bank next to me, I saw a pretty green orchid. Once I had spotted the first one I realised that there were a dozen or so, almost invisible unless you look closely.

There is a sign telling a story about a train brakeman who was attacked by a wild boar, so when two tiny black piglets ran onto the track in front of me I was delighted but a bit apprehensive about where the mother might be.

Again the trip home was mostly down, so it was a much shorter trip than the the outward journey. As I came to the turnoff to the camp, my tyre punctured again, less that ten metres from where it had the morning before! There must be some very sharp stones on the road near here, unless someone has spilled some nails or staples that I didn’t see.

I enjoyed another shower, then drove out to the campsite at Pureora where the trail officially begins.

In the morning the sky was overcast, and as I ate breakfast it started to rain. I was humming and harring about whether to continue, as this section of the trail goes highest as it crosses Mt Pureora, and the sky in that direction looked pretty black. I don’t imagine there would have been much to see up there.

When I went to unload the bike I could see that my damaged tyre was flat, which meant it hadn’t sealed up and couldn’t be used without a tube any more. This gave me just the excuse I needed to change plans and head to Taupo to buy a new tyre.