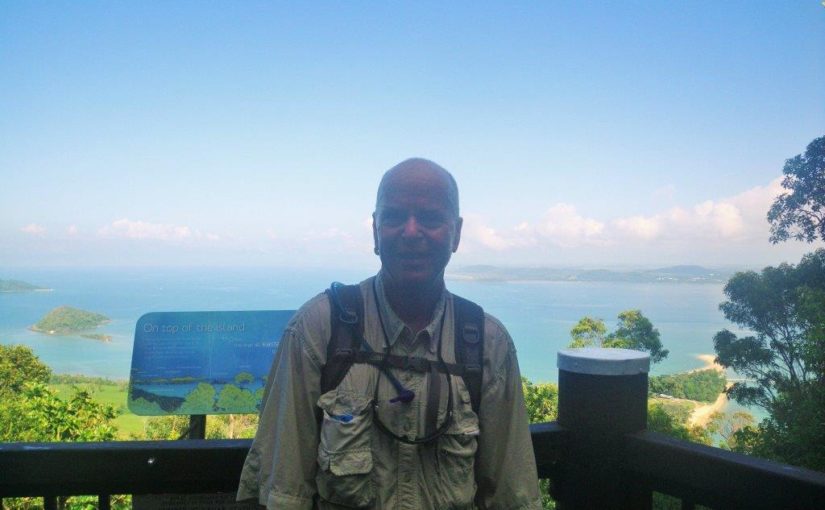 This morning we were so well organised that we arrived at the water taxi office almost 20 mins before departure time. We had booked a trip across to Dunk Island, about 10 mins off the coast. Today was the first blue sky, hot sun day we have experienced on this trip to Australia.


As soon as we landed and were looking at a map of the island, one of the staff asked us if we wanted a green coconut to drink. His job is to climb the trees near the cafe and cut down the nuts before they become a danger to tourists. People have been killed lying under a shady coconut palm at the wrong time. It was a nice welcome.

Dunk Island used to have a very up-market resort, but it was devastated by Cyclone Yasi back in 2011. The previous owner took the $48 million insurance payout and retired – the current owner paid just $7.5 million, but there is little evidence of rebuilding. As we walked past the resort we could still see broken roofs, smashed windows and other evidence of massive destruction.

We had been told there were great views from the top of 271m high Mt Kootaloo, so we decided to do that first before the day got too hot. We had thought about doing a full 11 km circuit, but at the top we realised it was going to use up most of the day so returned the way we had come.

The view from the top is absolutely stunning. In the second world war there was a radar station here, and there are a few rusted remains of the machinery. In those days the army operators had to camp at the top overnight. There was an airstrip built secretly on the island in 1941, but it didn’t stay secret for long – by 1943 it had appeared on Japanese maps.

As we were climbing the hill, Felicity wondered if we might be more likely to see snakes on an island due to no cane toads, but it wasn’t long before we were startled by an animal jumping off the track in front of us, and sure enough it was a toad. We saw several of then during the day, but no snakes. There was even a toad hanging out in the men’s showers down by the jetty.

After our hot mountain climb, we went for a snorkel at Muggy Muggy Beach, which is supposed to be the best spot, Unfortunately the water was very murky and the coral not at all impressive compared to the other dives we have done. I did disturb a small stingray and followed it for a while, trying to attract Felicity’s attention without success.

Near the end of our snorkel, Felicity spotted a huge conch sliding along the sea bed. Its shell was about 200 mm long, but the snail foot would have been almost half a metre when full extended. A long tube extended in front, presumably sucking up food. Neither of us have seen anything like it.

We ate lunch in the shade of some trees, then walked back past the jetty to another beach which we had been told was the second best place to snorkel. There was almost nothing at all to see, but it was so hot the sea was a pretty nice place to be.

It was a luxury to be able to take a shower and rinse our gear in fresh water before the trip home. We purchased an ice-cream at the cafe so that we could sit in their comfortable chairs while we waited for the boat. When I got up I felt a bit guilty about the damp cushion I left – I pulled the chair into the sun in the hope that whoever sits on it to eat dinner tonight won’t get too wet.

One thought on “Dunk Island”