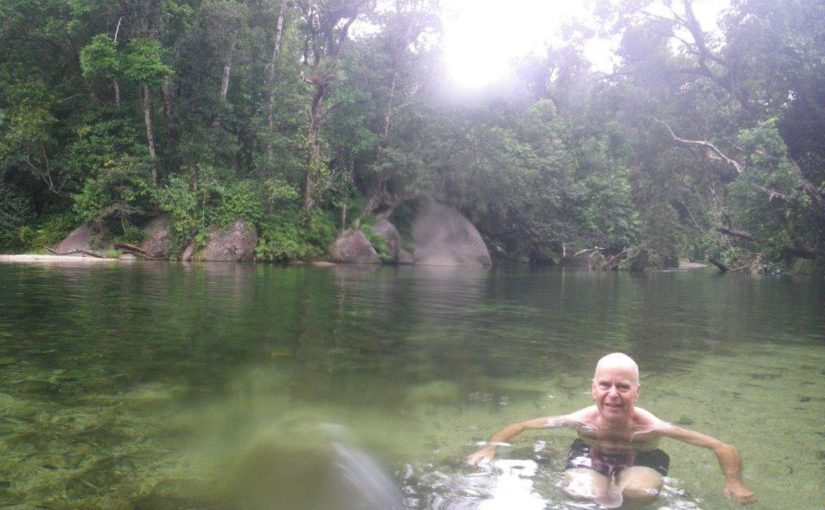 The area around Mission Beach is known as the Cassowary Coast, because it has one of the highest concentrations of this big bird in the country. You can’t drive more than a few hundred metres without seeing warning signs about them crossing highways. We were determined to see one.


I asked one of the girls working at the backpackers if she had seen any, and she told us that they often wander past the hostel. She said that just a few days ago when she had just woken up, she bumped in to a baby cassowary that had wandered right into the kitchen. She said it seemed to be more scared than she was, because it did a big poo on the floor and rushed out the door.

We had spotted a couple of short hikes through prime cassowary territory, so we set off to start at the Licuala Fan Palm walk. I noticed a couple of the “cassowary crossing” signs showing a small car crashing into a giant bird, and coming off second best, so I drove carefully. As we parked the car, we could see a fenced off picnic table with a sign telling people not to have food visible outside the fence.

It was a very pretty walk, and the fan palms were impressive, but no cassowaries were to be seen. We were told later that they are so well camouflaged that one could be hiding a couple of metres away in the dense rain-forest and you would never see it.

The next possibility was the Lacey Creek walkway, a bit further north. We were driving along the Mission Beach Road when a cassowary ran right across the road in front of us. I couldn’t stop because there was traffic behind me, and Felicity couldn’t get the camera out in time for a photograph. I turned around as soon as I could and drove back but it was long gone. Even though it was only a brief glimpse, we both feel satisfied that we can tick cassowaries off our list.

Lacey Creek was also a lovely walk. Lowland coastal rain-forest has different vegetation to the forest up higher and further inland. The creek itself was impressively clean, and we saw several species of fish and a saw-shell turtle.

It was about 11.30 when we set off up the Bicton Hill Track in the Clump Mountain National Park. It was advertised as a 2 hour round trip, but we made it back by about 1.00, including a 10 minute conversation with a retired banana-truck driver while we sat in the welcome cool breeze on the summit. We did see a tree kangaroo run across the track in front of us. It was about the size of a big cat but with a huge tail.

We ate lunch at Bingil Bay, then drove north towards our night’s accommodation just south of Cairns. We turned inland along the way to visit the Babinda Boulders. This is meeting place of a couple of creeks flowing down off Mt Bartle Frere, Queensland’s highest mountain. We walked along a track to a viewpoint over a stunning set of rapids. There were numerous signs about staying away from the dangers of this section of the river, but we saw at the start of the track a memorial to a young man who “came for visit in 1979, and never left”.

Fortunately there is a large, mostly shallow pool near the car park where it is safe to swim, because we were pretty hot and sweaty by this time. Although there are no warning signs, and several other people were bathing in the same pool, when we swam out over a deep section where the bottom was murky I couldn’t help thinking about crocodiles.

Now we are in Gordonvale, spending our first night in an Airbnb home. It is a very attractive old house with a huge covered deck surrounded by tropical garden. For the first time on the trip I have a proper desk to work at, which is fortunate because a few jobs have built up while I have been adventuring.