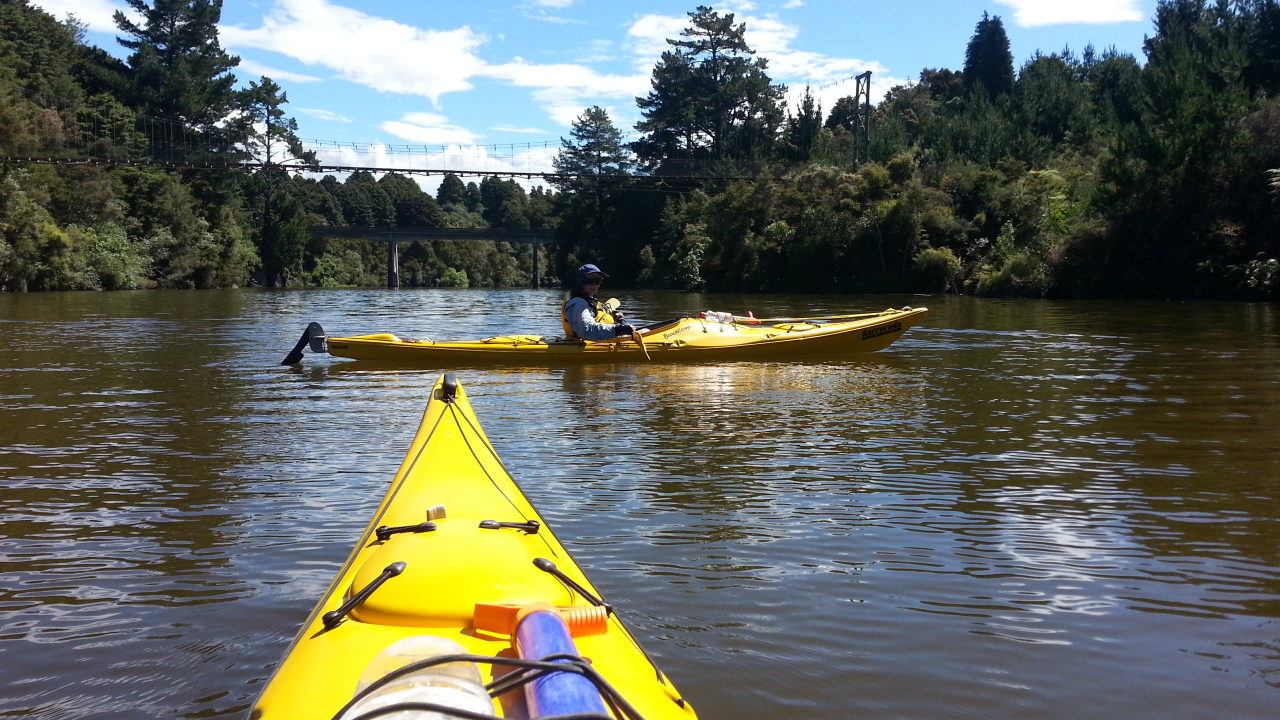 The last day of our summer holiday turned out to be the best adventure of the trip, despite being immediately followed by the biggest hassle.


On the trip up north we stuck mostly to minor roads, even though they were a lot slower than the highway. At Mangaweka we stopped for a quick break to look and an old hydro dam and powerhouse. The photo is out of order – at the end instead of the beginning.

We found a nice place to park right on the lake front near the Mangakino Golf course, and set of for what we thought would be a quick paddle in our kayaks before dinner. I was thinking we would travel along the lake edge then have a look at the entrance to Mangakino Creek, where a new suspension bridge for the Waikato River cycle trail has been built parallel to the highway.

What I didn’t expect is that around the corner from the bridge we discovered one of the most magical places to kayak we have ever visited. Years ago, the creek would have been a narrow waterway at the bottom of a deep gorge, but when the Maraetai hydro dam on the Waikato was constructed at the beginning of the 1950s the lake backed up into the gorge making a long waterway.

On either side of us, rock walls extended up to the bush far above. The river wound back and forth for kilometres, and although we had travelled far further than we intended we kept wanting to see what was around the next corner. The water was so still we could see the entire scene reflected below us. Occasionally we passed the tops of drowned trees that are somehow still standing after 65 years.

After the first couple of kilometres the water became clear, and we could see heaps of trout darting out of our path. We saw several families of ducks, and a couple of swans with three tiny cygnets that can’t have been more than a few days old.

We were just starting to think that we would have to turn around when we met a couple of women paddling down, and they asked us if we were going up to the waterfall. When we heard it was only another 15 minutes away we couldn’t resist.

By the time we finally arrived back at the van it was quite late in the evening, and we were both pretty tired, but once we jumped into the river to wash off the day’s sweat and had a cup of coffee we were feeling good again. Then, just when I thought we were about to enjoy a relaxing dinner I saw the van had a flat tyre.

It took me quite a while to find all the tools and figure out how to get the spare out, but just when I thought I was in the home straight I discovered that the drain pipe from our waste tank had been fitted directly under the jacking point. The Fiat jack has a round knob at the top that is supposed to fit into a hole in the chassis which keeps it safely located in the correct position. Unfortunately this makes it pretty useless (and dangerous) for jacking on any alternative point as I quickly discovered.

Luckily for us we had a very friendly neighbour who had been telling us about other great places to kayak. He bought over a hydraulic jack that would have been a great alternative if it hadn’t run out of oil. “No worries”, he said, and fetched a bottle of cooking oil from his BBQ. With me holding a small hose vertical and him slowly pouring oil out of the cap we managed to fill it up and get it working just in time to get the wheel replaced before dark.

Our dinner had gone cold by this time, and I was sweaty and dusty and rather greasy, but Felicity warmed the food up as best as she could and we finally got to eat. Since it was our last night it didn’t bother me too much getting the sheets a bit dirty.

Driving back to Auckland this morning revealed another problem: the rear van tyres are supposed to be pumped up to 68 PSI. I knew the spare was a bit on the low side, but every petrol station we stopped at had a fancy modern tyre pump designed to be fool-proof, that could only pump a maximum of 60 PSI!!! It wasn’t until Cambridge that I found an old-school pump that could do the job.

So now I have a list of maintenance jobs to do on the van that will take a day or so to get it ready for the next adventure. It will be well worth the effort.