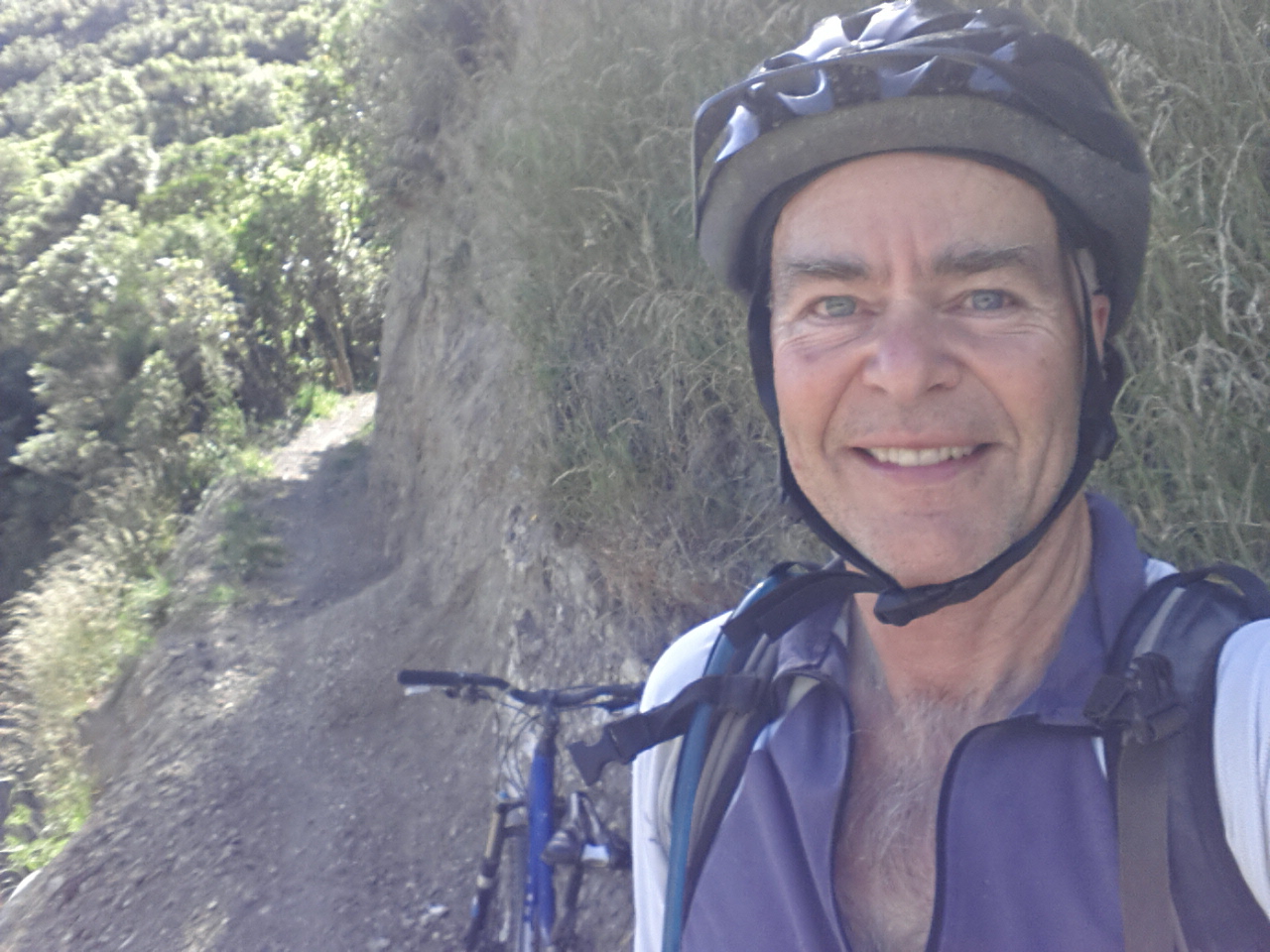 We probably chose one of the quietest nights of the year to camp beside the Manawatu River, at the eastern end of the gorge. We did hear a couple of trains go past, but almost no trucks.

The hills above are lined with dozens of wind generators lazily turning in the breeze, and although they do make a small amount of noise when you are up close, it was drowned out by the rushing of the river, so no worries. It is the kind of noise that you probably wouldn’t notice if you lived nearby, unless, of course, if there was compensation available!

I became very keen to camp at this spot when I saw that nearby there is a new downhill mountain bike track built by DOC. After breakfast Felicity set off on a walk in the bush, while I rode almost two kilometres up a gravel road to near where the windmills are situated.

The entrance to the trail is barely signposted, but I was looking carefully, and had no trouble finding it. It turned out to be quite exciting, with bermed corners and fast drops. After the day before’s rain there was even a bit of mud to make things slippery and exciting in a couple of places.

It passes through beautiful native bush, not that I was able to spend much attention on admiring it because I was focussed on staying on the trail. My only criticism of the 2.5 km trail is that it was over all too soon.

So I rode back up the hill for another turn. The second run went even faster, because I knew there were no particularly dangerous obstacles. There were two riders behind me at the top, but I had time to get my phone out of my bag at the bottom, take a photo, then pack up again and ride off before they caught up.

When Felicity arrived back at the van we had a cup of tea and a mince tart, then drove through the gorge towards Ashurst. The road is an impressive piece of engineering, and we could see where a new section of road has been built to repair the massive landslide that closed the highway recently. Many sections have wire mesh fixed to the hillside to catch bolders that come hurtling down regularly.

We soon turned off the highway and headed up the Pohangia Valley. When we saw a sign advertising pick-you-own blueberries we joined hundreds of other people harvesting the most massive crop of berries that you could imagine. Some people picked bucket loads, but since we have limited storage space we only purchased about half a kilo.

The Totara Reserve regional park seemed like an option for the night, but it was very crowded, and after driving all around we realised that we would have to park quite a way from the river. This campsite is in a very attractive bush setting, so I hope we can come back some time when it isn’t peak season.

We continued on to a very small and basic DOC campsite just before the Piripiri bridge. We have a big group of teenagers camping next door to us, but they seem to not be seriously into alcohol (so far anyway).

Most of the afternoon we have been reading in the van, but we did enjoy a refreshing swim in the river. There is a long pool under the bridge, with a strong enough current that swimming 50 metres seems like a couple of hundred. For some reason the water flowing down out of the Ruahines is significantly warmer then it was just a bit further south.