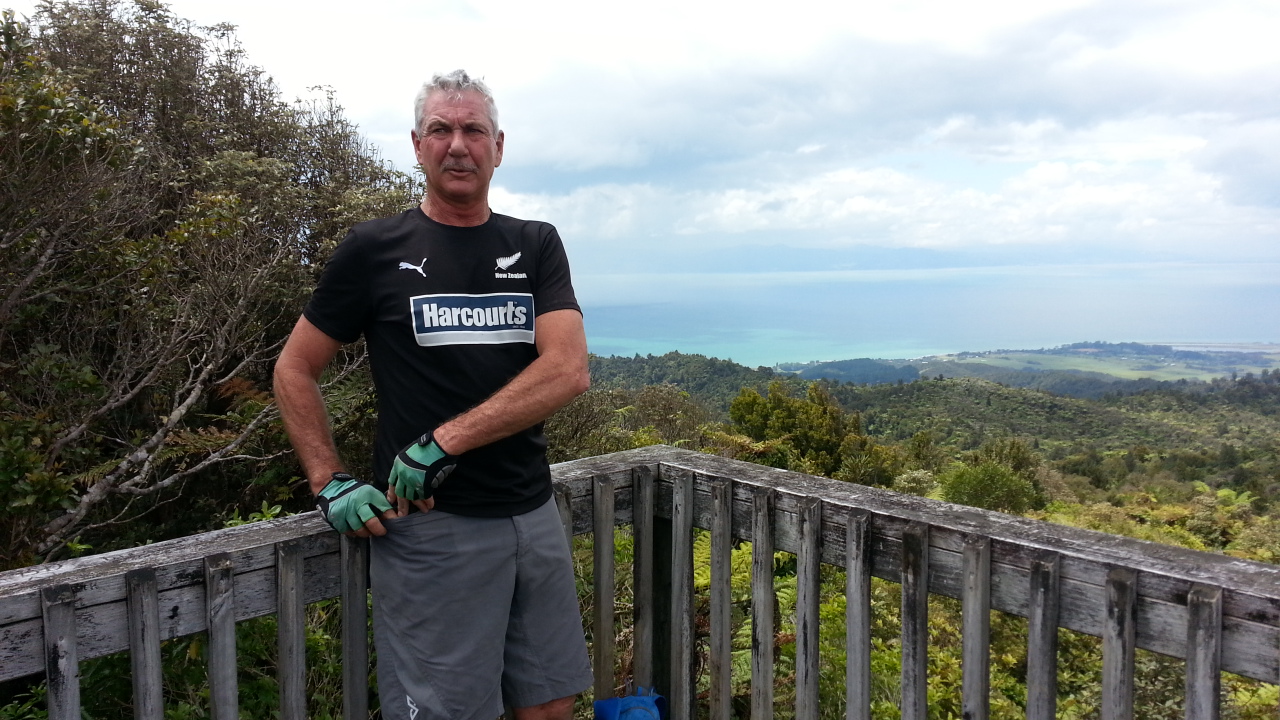 My buddy Kerry’s idea of a perfect birthday is to ride his bike to the top of a mountain and “come down again at 100 mph”. That sounded fine to me, so yesterday we headed to the Hunua ranges.


A brief rain shower almost exactly at 10 AM as forecast was just enough to make the ascent hot and steamy, and the few exposed sections of papa rock slippery enough to add a bit of extra excitement.

The distant hills in the background of the first photo are where we were heading.

A couple of kilometres up the trail from Waharau Regional Park we had to stop briefly while he re-attached his back wheel after the axle came undone.

As the trail became steeper, we encountered a few sections so corrugated that we had to push the bikes. The upper section of the Waharau Ridge Track has multiple sections of wooden steps, which required more pushing.

When we finally reached the Kohukohunui Track at the top of the hill, we turned north, without noticing the “no mountain bike” sign. We kept climbing (and sweating), sometimes riding but mostly pushing. Hanging loops of unbreakable supplejack vine across the trail made me wonder how tricky it would be coming back down, but I pushed my concerns to the back of my mind.

By the time we reached the Adams Lookout campsite we were both getting rather tired, and looking forward to finding a viewpoint before turning back. The wooden tower at 583 metres above sea level was a welcome sight, and well worth the effort of getting there. We re-fueled and admired the view of Thames in the distance.

Coming down was much easier and faster. I can’t understand why they don’t like mountain-bikes on this old 4WD road, particularly after seeing the extensive damage done by quad bikes. The wooden steps slowed us down a bit, but it wasn’t long before they were behind us and we were back on the fast downhill section.

Unfortunately, the recently laid gravel is very sharp, and Kerry’s rear tyre got a couple of cuts. He tried pumping it back up in the hope that the latex inside would make a seal, but he ended up having to stop again and put a tube in.

Contrary to the impression you might get from my photographs, we only spent a small percentage of the trip doing repairs; it’s just that riding down hills at tremendous speed require both hands on the handlebars so my camera stayed in my backpack.

All too soon we were back at the car, feeling very buzzed from the adrenaline.

We stopped at Kaiaua while we were still hot for my first swim of the season, even though the tide was going out and we had to wade about half a kilometre to get water over our knees!