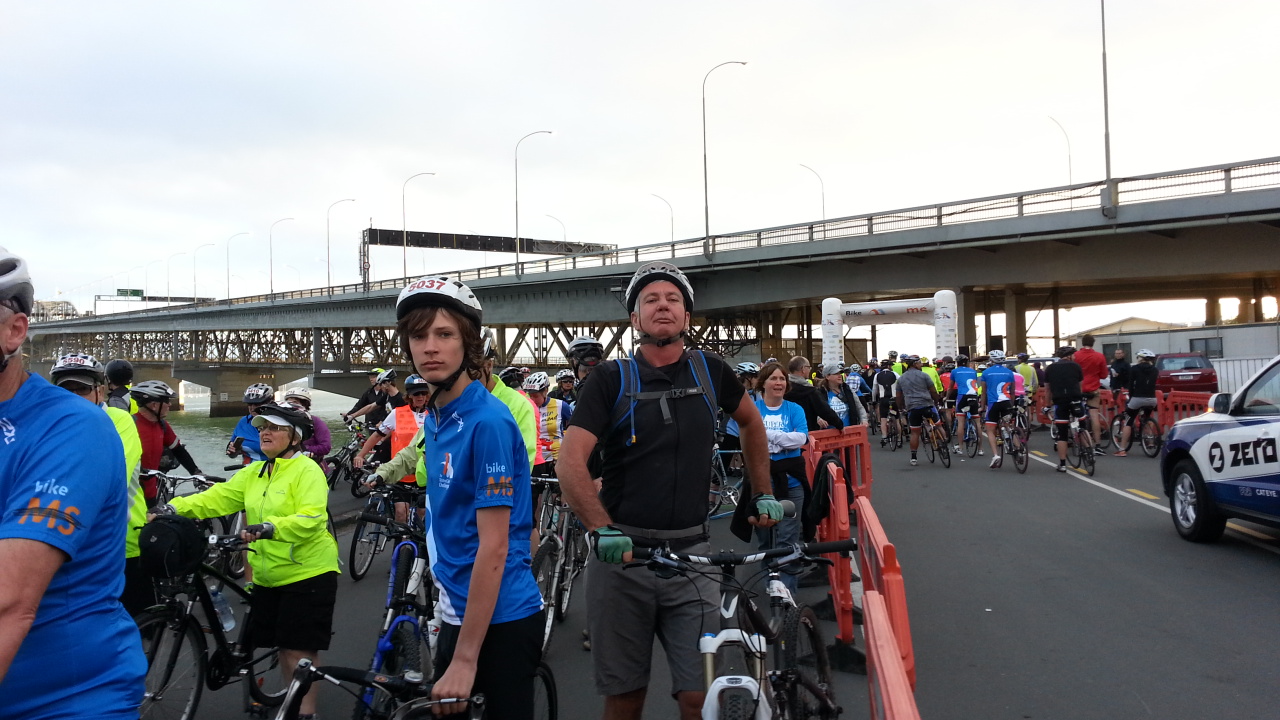 Who would have thought you can bike from Central Auckland to Albany in under an hour?


To make that possible on a regular basis would require some infrastructure to replace the handy busway my friend and I were allowed to ride on early this morning.

Kerry’s wife dropped us at Westhaven and we rode around the marina to the starting gate, beneath the harbour bridge. He had a secret tactic for getting a good position in the pack; he blatantly pushed through a gap the barrier, right at the front.

I had to follow, under the full glare of public disapproval. They all know it’s not a race,  it’s just a fun ride. You are not even supposed to overtake until over the bridge.

So when the starter’s horn sounded Kerry was off at tremendous speed, catching everyone by surprise. He reckons he lead the way almost to the top of the bridge, before a younger guy on a road bike caught him.

I passed quite a few riders on the way to the Shelly Beach off-ramp, and even a few on the bridge. But then I remembered to admire the view and enjoy being in such a special place.

I appreciated being out in front of the big pack on the way down the bridge, else some serious illegal overtaking would have been happening. I was glad I decided to ride my Kona hard-tail with the big gear on the crank.

I caught up with Kerry about Onewa. I knew a lot of faster riders were in front of me, but I was surprised that we were passing a lot of slow riders. Then I noticed their numbers were a different colour to ours, and realised they had left 20 min before us on the 50km ride. At that point they had 40km to go, so I suspect not everyone made it.

The busway makes a great route to cycle on,  so I was sad that Constellation Drive came up all too fast and we diverted onto normal roads. We wondered about nipping through the park to Rosedale Rd and seeing if we got disqualified. But we went with the flow, down Bush Rd and on to the old Albany Highway to the village.

We were at the stadium about 7.50 after a 6.55 AM start. They gave us both medals for being cool.

We didn’t hang around,  after a brief comfort-stop we rode back down to Oteha and up through the old Centrepoint property to Gills Rd. At that point we met the 100 KM riders coming the other way. After we rode past a marshal I heard him say to his son “aren’t they meant to be going the other way?”

Kerry decided to keep riding all the way home so he can watch some men chasing a ball on TV. I made myself a second cup of coffee then realised I could still get down to the Royal Albany Trail working bee by 9AM.

Even though I seem to have been the only attendee,  the working bee went well. The track got re-shaped in a few places, and cleared of punga and gorse in others. I even might have convinced a couple of riders to come next month.

3 thoughts on “Biked the Bridge”