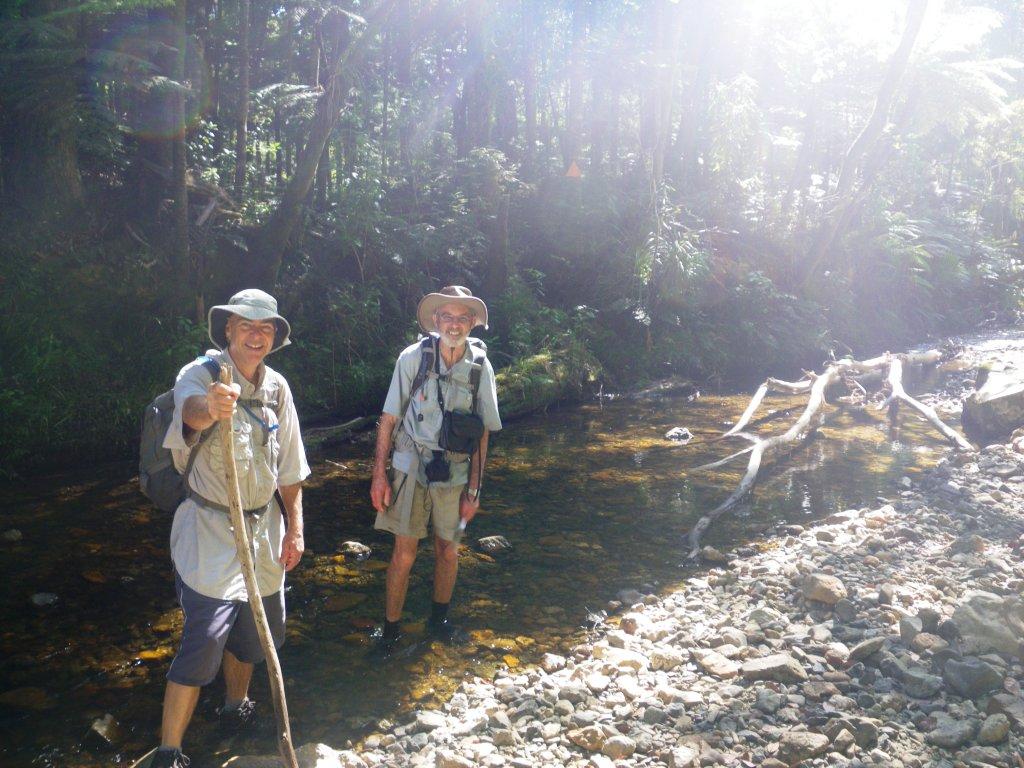 Our friend Murray Faulkner is walking the Te Araroa Walkway, and when we heard he was about to do the Russell Forest section we decided to join him for a day. Yesterday he took a water taxi from Opua to the Waikare Inlet where he joined his wife Linley and their campervan. We drove up from Auckland and met them there mid-afternoon.


They were parked next to the creek at the edge of the metal road, which was very pleasant except when cars drove past raising clouds of dust. One driver of a blue V8 caused some extra concern because he clearly enjoyed being sideways more than pointing in the direction of travel. He must have been making some kind of deliveries because he came and went a number of times. He was confidant enough in a skid to take one hand off the wheel and give us a friendly wave, but we decided that since it was a Saturday evening and that he was likely to have a beer or two it would be advisable to move our vehicles out of the path of potential disaster.

Murray set up a portable BBQ that he won recently for being the owner of the most derelict BBQ in a competition, so we enjoyed a pleasant dinner in the sun before pitching our tent on the bank of the stream and settling down for the night.

I knew the trail would join the Russel Walkway near where I enjoyed the worst mountain bike ride of my career so I was a little bit apprehensive about the trip. According to the trip notes, this section of Te Araroa is 25 Km, so we got ourselves breakfasted and away by about 8.30 AM.

Waikare road was straightforward for the first few kilometres, past a marae and school. At the final bridge we were glad to see a big bunch of Maori kids engaged in active outdoor play which involved gumboots travelling backwards and forwards across the river. Much healthier than playstation! A girl on the bridge informed us that they catch eels in the pool below.

The road became more of a 4WD track after that, and eventually petered out altogether, so we followed the trail directions by walking up the creek. Since there hasn’t been significant rain for weeks this was pretty easy, but I could see it could be rather dangerous in bad weather. The bush we were passing through was stunningly beautiful, and we didn’t mind the fact that our boots were wet from walking in the water. One of the things I enjoy about being in the bush with Murray is the botany lessons; today we learned about Makamaka and Towhai trees which only grow in Northland.

We came to a DOC sign on the bank which tricked us briefly into searching for a track, but a check with my GPS showed us that it was simply marking the end of Maori land and the start of the Russel Forest park. We began to see orange triangles marking sections of trail that cut corners, but we were still in the Papakauri stream most of the time until nearly mid-day. The track became more substantial, and evidence of quad bikes informed us we were near the intersection with the walkway. Not far beyond that we came to the shelter that I recognised from my bike trip.

About that point I realised that our route didn’t head up the unmaintained section of the walkway after all, and that the remainder of the trip would be very easy. It was also going to be much shorter than the 25KM total suggested by the track notes, so we spent almost an hour and a half enjoying a leisurely lunch.

On the way up the hill to the top of Papakauri Road we saw some native orchids growing on the track. While we were photographing them, a French guy named Jean who is also walking Te Araroa caught up with us.

We arrived at the rendezvous point a couple of hours early, so Murray and Jean continued south down the highway while Felicity and I waited for Linley to arrive with our car. Although the tide was well on the way out, we managed to climb down under a bridge and cool off in the river, which was an interesting mix of cold fresh water and warm sea. Now I’m sitting on the side of the road… typing this and looking out for our car which arrived just after the word ‘road’ – perfect timing.