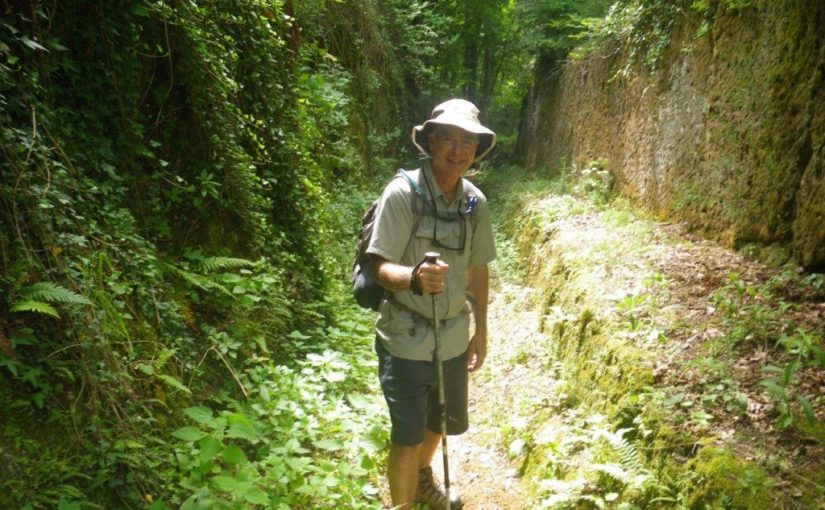 We were dropped off at the end of a small country road near San Valentino in the early afternoon, so we only walked a kilometer or so before stopping under a shady oak tree to eat lunch. Soon after we set off again, the road petered out into a grassy track and eventually we came to a sign advising us that we were at the beginning of the Via Cava di San Carlo.

There are many via cava in this area, and they are one of the main reasons we were attracted to this particular walk. These ancient roads were carved out of the volcanic tuff rock by the Etruscans over 2000 years ago. In places they are 20 meters deep, and wind their way down and along rocky gorges. Every cliff in the area seems to have small entrances where tunnels and rooms have been dug out.

It is astonishing that this ancient society was wealthy enough to employ the thousands of laborers who must have spent years carving out the rock. Archaeologists have been unable to date exactly when these were constructed, and it is possible that even before the iron age people were extending natural caves and building primitive rock shelters.

In Roman times and into the middle ages the caves were used as a necropolis where bodies were buried, but some of the “colombario” (caves with rectangular niches cut into the walls) were inhabited until the 18th century.

When we reached a stone bridge across the river at the bottom of the gorge we decided there was just enough water to get wet and cool off. Through the trees in front of us we could see the town of Sorano where we were headed, but we figured we would be hidden in the dark bush so stripped off and plunged in. We hadn’t seen any other walkers all day, but after we crossed the bridge we saw dozens of day-trippers so we were a bit lucky not to be discovered.

In the late afternoon we climbed to the top of the San Roco necropolis which is just across the valley from where we would spend the night. As we headed for a path leading to some of the caves, a Dutch tourist told us to be quiet and pointed out a meter and a half snake slithering away over the rock. We watched it climb up a tree and disappear over the cliff. In photo 8 you may be able to see it in the centre of the frame, but it is pretty well camouflaged.

After descending back to the river, we walked up a cobblestone road to the “Porta di Merli”, which is a 16th century gate to the town. It one had a drawbridge which could be raised in the event of attack, although it is hard to imagine how invaders would be able to use the via cava without being ambushed by defenders hiding at the top on each side.

Sorano is a typical hill town perched on the top of the cliff. We explored the winding, narrow steeets, stopping for an overdue espresso in the main piazza. Right at the highest point is an ancient fortress, part of which has been converted into the Hotel della Fortezza where we spent the night. The photo “Sorano 3” is the view from our bedroom window.

We chose to eat dinner at the hotel, because the offered a Dégustation menu highlighting the local produce. We had over a dozen small bowls of delicacies, accompanied by a couple of the local wines. The breakfast was also a cut above the average, so I am well fueled for another day’s walking in this unique environment.