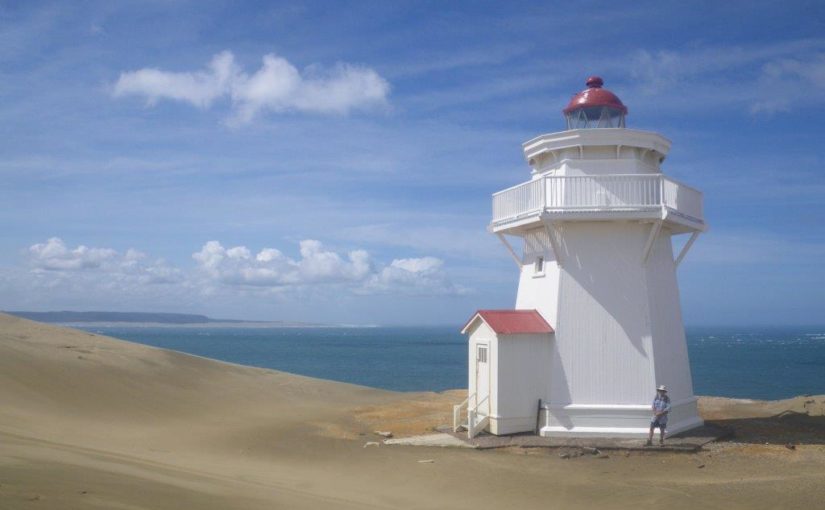 As the weather didn’t look too flash with regards to kayaking, we decided to explore the North Head of the Kaipara instead. After lunch on Friday we drove north to Dargaville then turned south again after crossing the Wairoa River.

Pouto Point is a small settlement at the end of the road. You are allowed to drive on to the beach and try and make it around North Kaipara Head and up the 107 kilometer long Ripiro beach before the tide comes in, but the only information I could find online described watching a stuck vehicle getting overwhelmed by the tide. The topo map shows huge areas of quicksand – out on the wide, flat area of sand where I would have been inclined to drive. We did see a few fishermen’s vehicles but I noticed that they drove along the edge of the soft sand above high tide line whenever they could.

The only place you can legally park overnight is outside the community hall, but it was very cheap, and was on the edge of a low cliff looking out to the north east over the Kaipara Harbour. It also has excellent showers for $2 which is enough for two if you are quick. The hall has a fully equipped kitchen and a couple of bunkrooms, so it would be an easy place to stay for someone without a vehicle to sleep in.

We followed a small path down to a beach, and walked up the coast till we found a spot where we could swim naked without anybody seeing. We were a bit sad to see the amount of junk – like old cars and household appliances, that had clearly been biffed over the cliff above.

While I was making the tea next morning I was treated to a flash of golden sun peeping up over the far horizon, before it disappeared into the cloud.

Our mission for the day was to walk 7 km along the beach to see the disused Pouto Lighthouse. On the way we passed a couple of shipwrecks – apparently some Kaipara locals know the location of over 150! Way out in the Tasman Sea to our west we could see a line of huge breakers marking where the dangerous bar was lurking in the entrance to the harbour.

The lighthouse is about 150 meters up a huge sand dune, so we trudged up to the top, only to discover a steep and narrow valley between us and our objective. We had to go about half way down before we could find a path leading to the building. It is locked up these days, presumably to discourage vandalism, because it doesn’t have any function. Nearby we could see the foundations of several houses, which were apparently moved back to the road to become baches when the lighthouse staff were made redundant.

We had passed an area of cliff where the tide came right up to the bottom, so Felicity wasn’t keen to linger too long in case we got cut off. On the way back we noticed a couple of dead frogs lying out in the middle of the beach. They must be common in this area – there was even one in the toilet bowl at the campground. Felicity had raced to get the camera but it turned out to be shy (or perhaps deeply ashamed to be living in a toilet), and it ducked around th U-bend out of sight.

It was lunchtime by now, so we had a quick swim then climbed up the dunes to look for some shade. On the back side we found a lovely spot under the teatree with a mossy carpet to sit on. It was so pleasant that we hung out for an hour or so after eating our lunch.

When we arrived back at the motorhome we had a cup of tea then drove north again. About three quarters of the way back to Dargaville we turned towards the coast where a place known as Glinks Gully allows vehicle access on to the northern section of Ripiro Beach. This is probably a much safer place to drive on a beach, but our plan was to simply stay overnight at the campground then walk down the coast in the morning.

This time we were treated to a sunset over the sea, but it wasn’t particularly spectacular. We did have a pretty good view out the back window of the motorhome, the hot weather and surprising lack of insects allowing us to keep the window open right up until it was time to turn the lights on.

Our morning walk took us a couple of kilometers down the beach to where the first small creek flowed out through a gap in the cliffs and across the beach. We could see that people had used the area for a campsite, and I imagine there would be dozens of opportunities further down the beach. We turned back and followed a quad-bike trail at the back of the dunes just outside an expensive-looking farm fence. We were delighted to see so many pohutukawa trees growing amidst the dunes, and learned that they had been planted by Project Crimson when we got back to the car park.

The advertised rain had not yet arrived, so we headed north to the next coast access at Baylys Beach, which is pretty much due west of Dargaville. The narrow road down the gorge turned into a creek bed then suddenly I was on the beach. It was reassuring to see dozens of other vehicles parked on the hard sand, including a couple of commercial 2 wheel drive campervans. I bet their insurance stopped the moment they drove off the end of the road.

Felicity had spotted a walking track along the top of the cliff, so we followed it south to another creek where we could descend to the beach below. As we walked back we could see a dark layer of lignite, which is formed from a compressed peat bog in the process of turning to coal. We could see the remains of ancient kauri trees embedded in the crumbly material. Scientists believe these trees are over 60,000 years old, and grew at a time when the sea level was almost 100 metres lower than it is today.

Back at the motorhome we stashed out clothes and jumped in for a swim in the surf before lunch. I was just turning the gas off in preparation for the drive home when the first shower of the day arrived, so it seems the little window of fine weather was over.