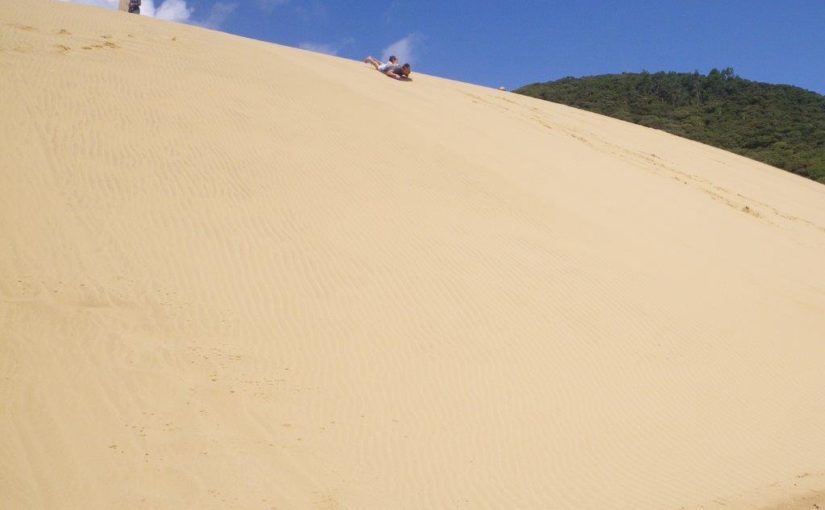 Although we have visited Opononi several times in the past, neither of us has ever crossed the harbour to check out the huge sand dunes at Rangi Point. One of the most popular tourist activities in the area is to climb to the top with a boogie board and slide back down at great speed into the sea.

At 10.00am we arrived at the wharf for the first ferry of the day, only to see it departing a few minutes early because it was full. Fortunately they made a second trip about 20 mins later.

It was surprisingly hard work climbing up the soft sand to the top of the slope, but well worth the effort due to the exciting descent. You travel quite fast down the hill till the beach flattens out, then when the board hits the water and the friction stops you seem to accelerate across the surface. The video below is of me, taken by Adrian on his iPhone.

We each had about 20 rides, then decided to leave the boards and climb all the way up the dunes to look at the Tasman Sea and the coast up to Mitimiti in the north.

The top is an unusual spot, blasted by the prevailing winds, and with deeply eroded gullies formed by the high rainfall in this area. There were spots where the sand was almost turned to stone, although we could still break it apart with our hands. At the highest point we found what looked like fossilised branches and tree stumps, but subsequent Google searches informed us this is Fulgurite, caused by lightning striking silica-rich sand. The temperature can be up to 30,000 degrees, so you don’t want to be on the top of a dune in a thunderstorm!

It was way too exposed and hot to eat lunch up there, so we walked back down to where there were a few trees growing in a gully that we could crawl under into a pleasant, shady spot. We hung out there resting until it was time to head back to the beach and the boat trip back to the Opononi Wharf.

Ever since we have been here I have had the song “Opo the crazy dolphin” running through my head. It was written by my uncle Crombie Murdoch, so is very familiar from my childhood.