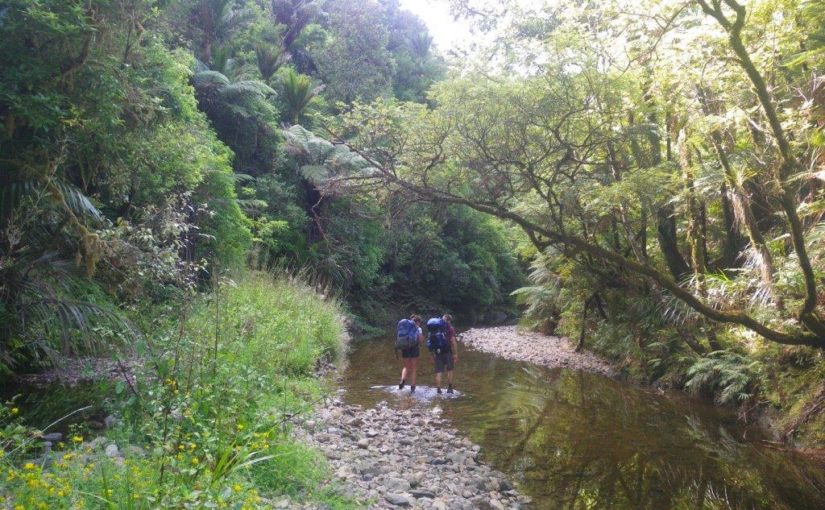 On Boxing Day our daughter and her boyfriend flew up from Wellington to join us for a week exploring the Far North. As the weather looked pretty good we decided to take them on an overnight tramp along part of the Te Araroa Trail from near Mangamuka Bridge into the Omahuta Forest.

When we did this walk a few years ago we continued on to Puketi Forest, but this time we decided to follow the Waipapa River down to a picnic area called Forest Pools. I had hoped we would be able to camp here, but objections by one of the local gangs convinced DOC to stop allowing people to stay overnight. We subsequently learned that leaving a vehicle here would be inviting break-ins, so we needed another plan.

Fortunately Felicity knew that the local doctor lived on a farm right next to the Pools, so she rang to see if we could leave our motorhome there. She kindly invited us to stay in their paddock right next to the river, and even offered to drive us to the start of the track first thing in the morning.

After about an hour walking along logging roads we came to the Mangapukahukahu Creek. This is where the formed track ends, and the route is walking in the creek bed. This is much more scenic than a track through the bush because we were out in the open most of the time. I was a bit disappointed when we reached the Waipapa about lunch time.

We found a nice gravel beach to have a swim and some food, then we set up our tents and lazed around the rest of the afternoon, with another swim before dinner. This is one of the most beautiful spots we have ever camped in.

Next morning we had a very slow start, partly due to the whisky we consumed the evening before. Because it was only a couple of hours walk back to the vehicles there was no hurry.

There was once another logging road along the Waipapa, but all of the bridges have collapsed long ago so we had to climb down into a gully every time we reached a side stream. It was also surprising how much mud there was considering there hasn’t been any significant rain recently.

After collecting the vehicles, we drove to the pools for a swim and lunch, then headed to Kaikohe to visit the supermarket for supplies. Our next destination was the Hokianga.

One thought on “Omahuta Forest”