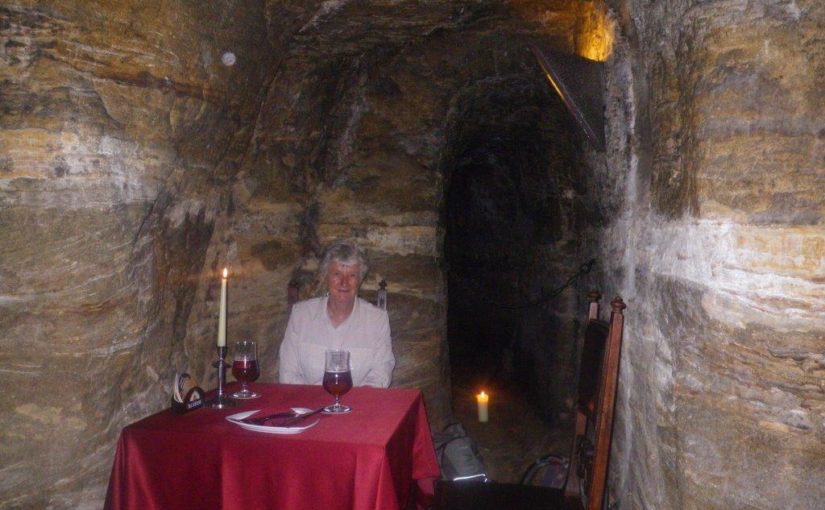 After spending the last couple of days sitting in a conference, Felicity was keen on some exercise, so we have spent the day walking, mostly in a couple of Prague’s many parks.

Last night we attended the WONCA conference dinner held in the Smetana Hall of the Prague Municipal House. The building is in the background of the photo I took of the Powder Gate a couple of days ago, but for a close-up look I recommend this virtual tour. Although it was built just over a century ago, it is one of the fanciest buildings I have ever eaten in. The festivities included a band, and despite my tired legs after the big bike ride Felicity got me up dancing.

Since today was our last chance to explore the city, we set of straight after breakfast, with just a quick stop at the local cafe for a decent coffee. We walked down through the Vysehrad Fort, crossed the river on the railway bridge, and then continued north to the bottom of Petřín Hill and its huge park.

I was keen to ride up on the funicular railway, so we decided to take every right turn so as to stay on the edge of the park. This still involved climbing quite high up through the trees before we found the rail line and descended again to the station at the bottom. Unfortunately, being a fine Saturday meant that over a hundred other people had the same idea, and I could see us spending an hour or so standing in a long queue. So we turned around and walked the 130 meters to the top, mostly through orchards planted years ago by monks from a nearby monastery.

At the top of the hill is the Petřín Lookout Tower, which rises a further 63 meters into the sky. It was built in 1891 for use as a transmission tower, but these days it is just a tourist attraction. After climbing 299 steps we were rewarded by fantastic views in every direction. I was glad to read that the tower underwent significant renovation in 1999, because it swayed rather alarmingly in the wind. After lunch we took a photo of the tower in the distance, with the white wall on the right.

We walked a bit further west to visit the monastery, which had been recommended to us by one of Felicity’s colleagues. It is famous for brewing beer, so even though the sun was barely over the yardarm I agreed to sample a glass with lunch. There are several attractive restaurants there, but we were fortunate enough to notice a sign pointing down a flight of steps to one of the original monastery cellars.

At the bottom, we walked through a narrow brick tunnel and emerged in a dining area roofed with vaulted bricks. When we looked more closely we could see that the rear area was an actual cave under the rock, so we chose a table right at the back in front of a narrow tunnel bending away into the darkness. Unfortunately it was chained off, so we couldn’t explore.

Felicity was keen to try a blueberry beer, but I was a bit skeptical and ordered an India Pale Ale, with which I was very satisfied. The waiter informed us that the blueberry bear was “for ladies”, so it seems I made the right choice. Given the location, we thought we should order the two traditional Czech meals. One was a duck leg with dumplings, and the other was a roasted pork knuckle with special bread and pickles. They were both nice, but included almost no vegetables. There was at least half a kilo of pork, so we were both feeling completely stuffed full at the end of the meal.

By the time we had walked back down to the Vltava River, we were also feeling a bit lethargic after all that food and alcohol, so since we both had unlimited transport passes we jumped on the first tram we saw and rode all the way to the end of the line. I woke Felicity up when the driver instructed everyone to disembark, and we found ourselves on the edge of a huge bush area at the northern edge of the city.

I could see a hill a few hundred meters away with people walking over it, so that seemed like a good way to burn off some calories. The path that we walked down from the tram stop led to a road which descended even further, and it soon became apparent that there was a deep gorge between us and the hill. We followed the river down with steep rocky cliffs rising on both sides, until finally we found a narrow dirt trail leading up into the forest. It was quite a nice change to be out in the wilderness after being in a city most of the time recently.

When we emerged from the forest at the top of the hill, we found the clear grassy area that we had seen from the tram stop. There were dozens of other people (and their dogs) enjoying the area, but it still felt quite wild. We walked around for a bit till we found an easy path down. At the bottom there is a lake formed by a dam across the river just before it enters the gorge. We walked along the edge for a while then climbed back up to civilization and the tram.

By now we were very tired so we rode the tram all the way to the terminus at the other end of the line, then jumped on one with a different number that took us back to the bottom of Prague Castle where we mingled with thousands of other tourists crossing the pedestrian-only Charles Bridge.

A cup of coffee woke us up enough to continue walking through some of the winding lanes and roads that we hadn’t been down in the old town. At one point we noticed a bunch of guys looking up at something, and saw that it was a figure hanging by one arm off a beam above the street.

Near the metro station we stopped to buy a freshly squeezed juice. The juicer explained that we couldn’t have a single watermelon juice like I wanted, and that they only did specific combinations. So I had to choose one named “Sexuality”. Felicity asked me if it was having any effect soon after I started drinking it and I told her no, but to my surprise, I was just finishing the last few slurps when an attractive young woman bounded up to me and asked me if I had any time to spare! She looked to be in her late teens, which is a couple of decades too young for my taste, and she was accompanied by a much younger teenager, so I declined whatever she had in mind. Almost certainly some kind of scam, methinks.

By the time we arrived home and I started writing this, 8.00 pm rolled around before we knew it and we realised we better get some dinner. We had planned to go back into town, but neither of us had the energy, and since one of the local pub/restaurants has grilled salmon and salad on the menu we have just been there enjoying a light meal that didn’t contain meat, bread or potatoes. We had also invested in some cherries on the way home from town, so they made a nice dessert.