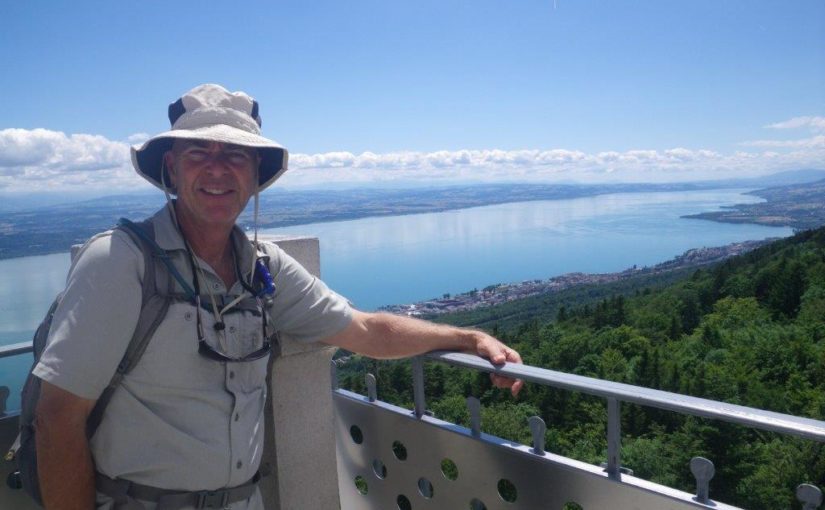 This afternoon we hiked down the hill from Chaumont to Neuchâtel, after riding up on a funicular railway. Neuchâtel is a bit under two hours by train south of Zurich in Switzerland.

It wasn’t straightforward getting from the Czech Republic to Zurich. We arrived at the airport in Prague to find that the check-in counter didn’t open for another hour. Fortunately the airport did have free wifi so the time wasn’t completely wasted. Our next setback was that our booking was on Air Berlin, which isn’t Star Alliance so we couldn’t use the lounge. We had to buy our breakfast like ordinary peasants, and hang out in a coffee shop waiting for our flight.

Which was delayed by almost an hour, because the plane arrived at Zurich the day before just after the airport closed, and had to land at Berne instead. This meant the crew had to go there and pick it up before the first flight of the day out of Zurich. When we finally departed, we flew north to Berlin and arrived just as our connecting flight was boarding.

The bus which took us from the plane out on the tarmac delivered us to an obscure shed far from the main terminal, which meant we had to run for almost a kilometer to get to our gate. We thought we had no chance, but as it turned out the second flight was delayed as well, so we spent another hour or so hanging around.

In Zurich, we thought things were back on track until we discovered that our bags hadn’t arrived with us. This caused another hour’s delay while we filed a lost baggage report, so we didn’t get on the train to Neuchâtel until after 5.00 pm. We were very relieved to meet Felicity’s colleague on the platform and arrive at their home where we will be staying for the next week.

Even though we stayed up quite late after dinner drinking Swiss wine and talking, we had to make an early start in the morning because both Jill and her husband had appointments. We walked into town with Jochen and did part of a tourist trail while he was attending a physiotherapist.

After looking at the port on the lake, which is mostly used for tourist trips these days, we noticed a large building with the names of many countries carved into the stone. This turns out to be the original home of the Universal Postal Union, which was founded in 1896 by a Neuchâtel Federal Councillor named Eugene Borel. We walked right around the building looking for New Zealand, but it must have been still considered a colony of “Grande Bretagne” in those days.

In dramatic contrast to Prague, where vegetables are a rarity, they are growing everywhere here. They are in the flower boxes along the streets, around the fountains, and in the parks. We’ve even spotted sweet potato and taro, which I wouldn’t have expected to grow in Switzerland. The lake surface is only 429 meters above sea level, so I guess we aren’t exactly in the mountains.

Jochen took us shopping so that we could buy a change of clothes while we wait for our bags to catch up with us. Felicity needed walking shoes, and always has trouble finding models that fit her feet, so it was lucky we had a translator. He even gave her some fashion advice about a shirt, which you will see in the next post. When we were done we said goodbye, bought some lunch and set off on an adventure.

Just south of town a funicular railway runs steeply up a hill to the hamlet of Chaumont, about 600 meters above the lake. On the map, it appears as a grey line running vertically about two thirds of the way over to the right. The whole area is paradise for mountain-bikers, and one fairly serious downhill bike accompanied us up the steep track. The air was several degrees colder at the top, but we found a picnic table in the sun and enjoyed the scent of conifers while we ate lunch.

There was a viewing tower nearby, and since the entry fee was only a franc each we climbed to the top to check out the spectacular views. We could see three big lakes, and a whole range of snow-covered alps on the horizon.

The walk back down the hill to town took us almost two hours. The forest here in Switzerland is similar to the UK, but there were several tree species that we didn’t recognise. We only saw one squirrel, which looked smaller than the American Grey Squirrels that are everywhere in Britain. We also found some wild raspberries which delayed us for a while. They were much smaller than the cultivated variety, and grew on very prickly, sprawling bushes similar to blackberries, but they were worth eating.

At the bottom of the hill is an area of limestone bluffs where we found an overhang that looks like people camp in it. The earliest known human occupation of this area is 13,000 BC, so perhaps this was one of their sites. There is clearly very little concern about forest fires, because there are open fireplaces in nearly every clearing. There was another lookout from the top of the bluff, then a path dropping back to civilisation.

Our hosts were out for the evening, so we stopped off at the market to buy some dinner. We had been told that fish is expensive here, but we were able to buy a couple of small lake trout for a reasonable price. They were very bony and tasted slightly muddy, so I can see why they are not popular, but it was nice to taste local produce. We also purchased some chanterelle mushrooms, which are in season for a few weeks, and a bottle of Neuchâtel wine.

One thought on “Chaumont Funicular – Neuchâtel”