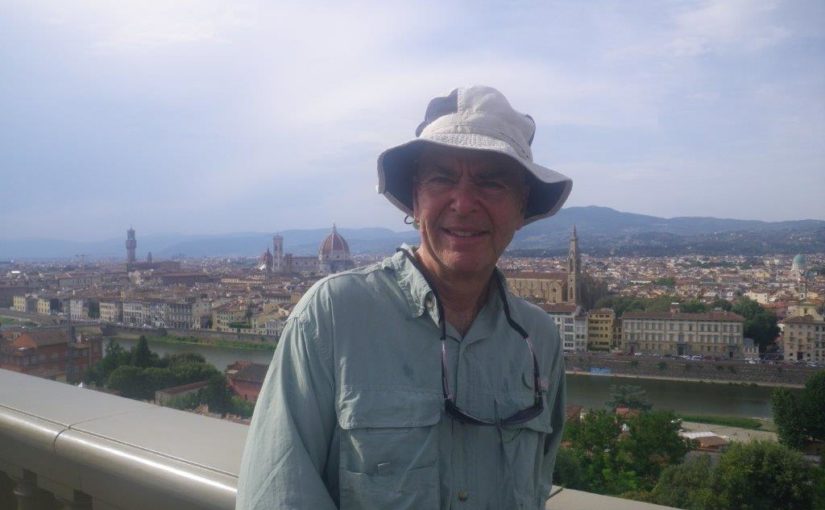 Our train left Neuchâtel just after 7.00am, and we changed to an international service at Lausanne an hour or so later. Sometime late in the morning we reached the town of Brig, then almost immediately entered the almost 20 km long Simplon Tunnel. For most of the 20th century this was the world’s longest, until one in Japan beat it in 1982. Now the record is held by the nearby Gotthard Base Tunnel which is over 57 km.

When we emerged into the daylight again at Domodossola, we were in Italy, and it was raining heavily. We changed trains again in Milan, and arrived in Florence about 2.00 pm to find it was fine and about 37 degrees. After droppping our bags at the hotel and doing some laundry, we set off to explore.

Florence (or Firenze as it is called by the locals) is very different to Switzerland. It is a lot dirtier for a start, and it seems a lot poorer. There are lots of African migrants trying to sell stuff on the streets to the thousands of tourists looking at all the sights.

The churches and public buildings are a lot older than those we have seen up until now. We thought about buying a ticket to get inside the major attractions, but when we saw the long queues of tourists we realized it would be smarter to just walk around and cover as much ground as we could.

The first big church we saw was the Basilica di San Lorenzo. It is one of the oldest in the city, being first consecrated in 393. It is the main burial place of the wealthy Medici family. The building we saw was a relatively “modern” version built in the 15th century. We did manage to get in far enough to see the first cloister, which has an orange tree growing in the center.

Just down the road is the Cattedrale di Santa Maria del Fiore, which is absolutely enormous. It makes most of the English cathedrals seem rather small by comparison. After St Peters in Rome, and St Pauls in London, it is the third biggest church in the world. The dome was the largest ever built until the development of modern construction techniques in the 20th century, and it remains the largest built of brick. The queue of tourists waiting to get in looked like it might be a world record too, so we just walked around the outside.

After passing dozens of other amazing old buildings, we came to the Ponte Vecchio (bridge) over the Arno River. During the 2nd World War, the Americans bombed every other bridge in the city, but they spared this one because of its historical importance. Because this is the narrowest part of the river, there has been a bridge here since Roman times, but this version was built in 1345. There are shops lining each side which used to be butchers (who presumably could fling all their waste over the side), but now the shops are jewelers and souvineer shops.

We walked down the Via de’ Guicciardini, and stopped at the Piazza Santa Felicita to look at the church of the same name, which is probably the second oldest in the city, built in the 4th century. Saint Felicity was a christian martyr who was buried in Rome’s Cemetery of Maximus on 23 November 165 AD aged 64.

Further on we passed the huge Piazza Pitti, and were grateful to find a water fountain where we could get a drink. Fortunately not too long after that we consulted a map and realised that it would be best to go back to the river bank and walk along it rather than trying to walk all the way around the Giardino di Boboli to get to our next destination.

This involved climbing up a steep hill, and lots of steps, but when we reached the Piazzale Michelangelo we were rewarded with fantastic views over the city. In the centre of the piazza is a bronze copy of Michelangelo’s famous statue David. By now we were both hot and thirsty, so at the bottom of the hill we stopped at a cafe for two coffees each as well as water.

The sun was staring to set by this time, so the temperature dropped down to about 30 degrees, which if there was a slight breeze was relatively pleasant. We stopped for a cheap all-you-can-eat pasta buffet on the way home, and ate outside on the footpath under an umbrella.