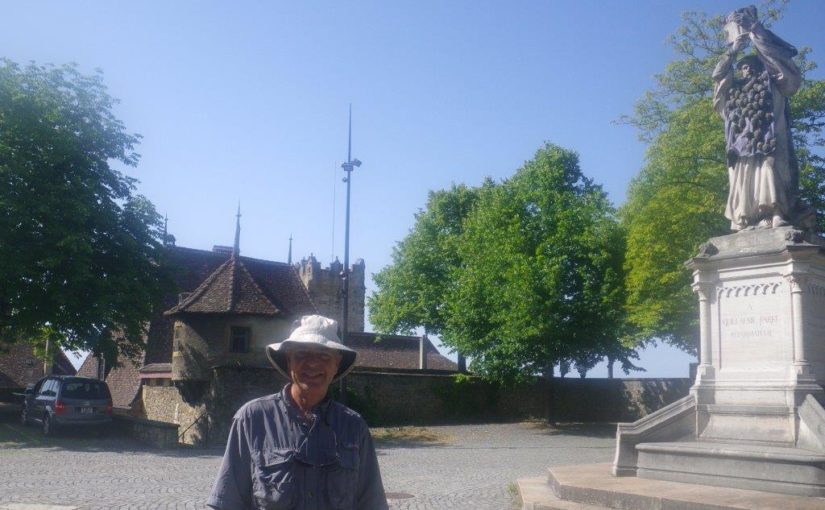 Saturday is a big market day here in Neuchâtel, so we decided to walk into town for breakfast, then do some shopping. On the way we called in to look at the castle, which was completed in 1276 and gave the town its name (“New Castle”). The collegiate church attached to the castle was open, so we looked inside and were impressed by the deep blue ceiling painted with stars.

Down several flights of steps is the road into the village. We found a small cafe with a shaded balcony, and ordered crepes for breakfast. The streets were busy with local people doing their shopping, and a young guy dressed only in “tighty whitey” underwear collecting money. Jochem told us that he was probably about to be married, and that it is common for strangers to contribute funds for the celebrations.

The market was bustling, with dozens of stalls selling local products. We loaded up on fresh vegetables and fruit. We saw one butcher selling horse meat, which we would have tried if we were cooking for ourselves, but our hosts are horse lovers (not in the eating sense), so we will have to pass up the opportunity. I was surprised to see it is quite expensive compared to other meat, so customers must develop a taste for it.

In the early afternoon we returned to the botanical gardens that we had passed through on our first day here. This time Jochem was with us to translate some of the informative signs. There was a video of twelve men threshing wheat with flails, which looked relatively effortless, but which I imagine was a technique requiring considerable skill.

We also saw a display of how hemp was once grown and used for fibre. Nowadays use of marijuana is treated as a misdemeanor, but commercial production is still illegal. I got to look up close at grape growing. The traditional method here is to grow small vines on an individual stake instead of along wires like they do in NZ. The local wine is pretty good, but very little gets exported because the locals drink it all.

We had hoped to have a barbecue on the beach for our final meal, but late afternoon the clouds rolled in and there was a terrific thunderstorm, so we switched to plan B and ate at home. Tomorrow morning we are off to Italy.

2 thoughts on “Last day in Neuchâtel”