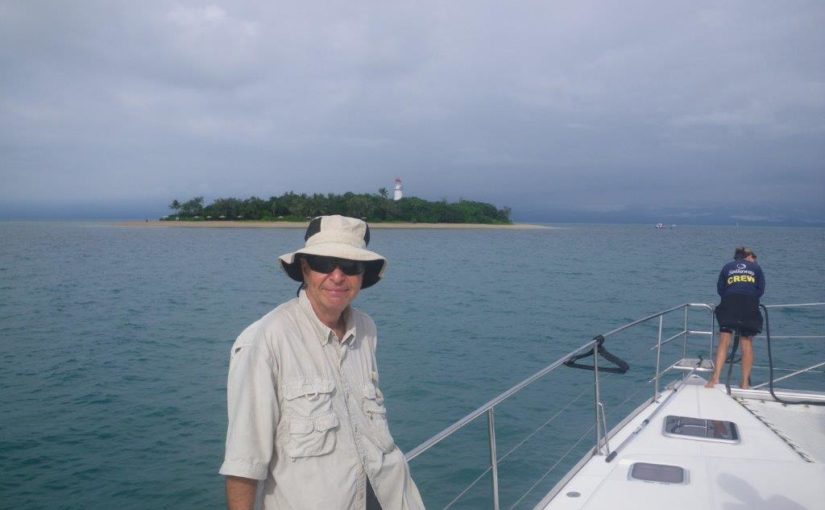 We had such a good time snorkelling on the Great Barrier Reef yesterday that we decided to do it again today, and booked ourselves on one of the Sailaway catamarans. Their trip is to the inner edge of the reef, about 15km off shore. The wind had dropped almost completely overnight, so we didn’t get to actually sail, but the water was almost flat, and perfect for snorkelling.


Being a Saturday night, the partying at the hostel was much more intense than the previous night, and continued till almost 3.00am. Fortunately we were both pretty tired so it didn’t disturb our sleep too much. When I got up in the morning to make coffee, I noticed a pair of female panties abandoned in the corridor outside our room so presumably someone had a good time.

It took the catamaran just over an hour to get out to Low Island, which together with the much larger Woody Island make up the Low Isles, which were first spotted by Captain Cook. Woody Island is basically just a patch of mangroves on a reef, but its partner is a genuine tropical island with palm trees, sandy beaches and a lighthouse in the centre. Most importantly it has a coral reef accessible right off the beach. On the map below, Low Isles is the white blob in the upper right – you have to zoom in to see names and details.

The catamaran tied up to a buoy a few hundred metres off shore and we transferred to a glass bottom boat for the final trip to the beach. The skipper drove us over a huge shoal of bait fish – about the size of sardines – and told us it was likely there would be reef sharks nearby. Just as we were about to land he spotted a green turtle swimming about a metre from the sand, and said we would probably see more.

The coral on the inner side of the reef is quite different from what we saw yesterday. Most were soft corals, which don’t have hard skeletons like the ones on the outer reef. It was fascinating to begin our dive by swimming into wall-to-wall fish which miraculously part about half a metre in front of you then close up again behind. Felicity spotted a couple of sharks lurking underneath, and later the two of us watched a set of fins cruising backwards and forwards along the beach a couple of metres from a blissfully unaware child playing in the shallows.

It wasn’t long before we spotted another turtle, and we swam with it for a while admiring the beautiful patterns on its shell and head. We found a second turtle lying in a bed of corral that was almost the same colouring – I was right over it before I realised what it was.

There were lots of big tropical fish to watch, some around a metre in length. There are probably around a hundred snorkelers every day in this spot, so they didn’t pay us much attention. After about an hour and a half we started to get tired, and slightly cold, so we headed back to the beach. On the way I spotted a moray eel poking its head out of a hole in the reef. As they have a nasty bite we didn’t get too close.

We walked right around the island in about ten minutes, then spent another ten minutes exploring the paths through the trees. A historical display had a sad story about one of the lighthouse keepers who became a bit deranged in 1907 and set off towards the mainland in a small rowboat with his two teenage children. Almost five years later the three bodies were finally found. A magisterial inquiry did not find a reason for the disappearance, but in those days the light rotated in a bed of mercury which can produce poisonous gas known to make people (like hatters) mad.

When it was time to return to the boat for lunch, the skipper suggested that Felicity and I might like to swim back which seemed like a good idea. The tide had dropped a bit by this time, so when we ventured a bit too close to the reef we briefly ran out of flotation and brushed over the coral till we got back to deep water. Even though we were wearing wet-suits I was very glad we weren’t over hard coral.

The buffet lunch was even better than the previous day, and included a big plate of prawns. When the skipper spotted me attempting to discretely return for a third helping he laughed and said: “don’t hold back – we will just throw away any uneaten food – we have prawns every day so it isn’t a luxury for us”. So I tried not to think about the marine biologist’s lecture yesterday about how unsustainable the prawn industry is and ate a huge pile. I told myself that since these particular prawns were already dead it was clearly too late to save them.

It has rained every day of our trip so far, but fortunately mostly at night so it hasn’t stopped us having fun. The only problem is that we can’t get our gear properly dry so things are starting to smell a bit musty. This is supposed to be the dry season – I hate to think what it is like in the wet! Tomorrow we are going to head inland to the Atherton Tablelands, so perhaps the climate will improve.

One thought on “The Low Isles”