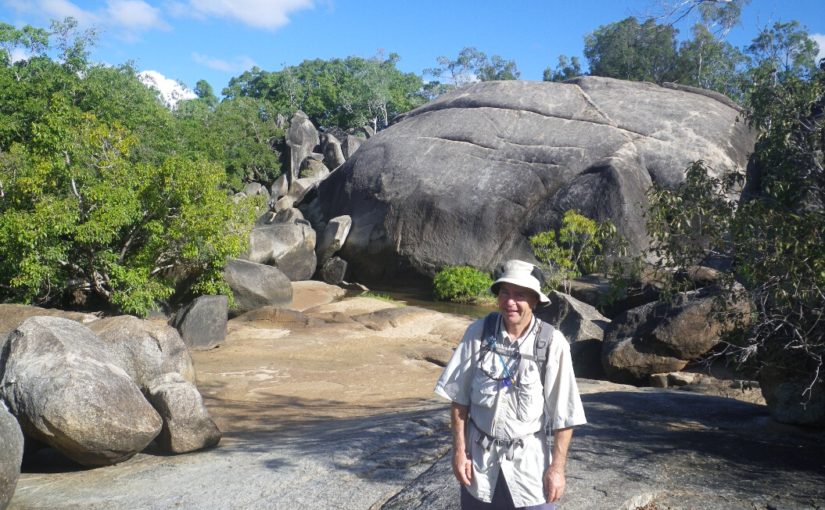 We left Port Douglas this morning and drove up to the Atherton Tablelands. After a bit over an hour’s driving we saw a sign pointing to the Mareeba Wetlands, and decided to take a look. While it is only about 30km inland from Cairns this area is over 400 metres higher, so the surroundings are much more like the rest of Australia than the steamy rain-forest on the coast.


The road into the visitor centre is 7km of red dirt, which was quite hard going in our little rental car. I sure wouldn’t want to be driving long distance off the tar-seal in a vehicle like this. As we parked the car we were greeted by a kookaburra screeching at us from the top of a gum tree, so there was no mistaking where we were.

While we were visiting the amenities before setting off, four young emus wandered out of the bush and looked at us curiously. Inside the toilet, a small, bright green frog clung to the wall. There is a very attractive lodge with canvas-walled rooms which would be very nice to stay in if you were seriously keen on birding. We only saw a few in the middle of the day, but I’m sure there would be lots more at dawn and dusk.

The wetland consists of two shallow lakes surrounded by savanna grasslands. We were offered a list of 220 birds that we could look for, but as we had no means of identifying any of them we declined. We put on our boots and hiked about 8 km through the scrub to Pandanus Lagoon and right around Clancy’s Lagoon. The whole area is covered with thousands of huge termite mounds – I gave a small one a kick with my boot and millions of them swarmed out ready to attack.

Not far from the beginning of the trail we came across an 11 ton stainless steel lizard. This artwork was donated by a Japanese sculptor who was impressed by the fact that this is the only place in the world where you can find natural wild rice uncontaminated by cultivated varieties.

It was lunchtime by the time we got back to the car, but we decided to drive a bit further and explore Granite Gorge. The tablelands has a lot of tropical horticulture such as sugar cane, bananas, avocados, and our favourite fruit: mangos. Unfortunately these aren’t in season at the moment, but we stopped at one huge plantation to purchase a bottle of Golden Drop Mango Wine. They also had frozen mango ices for sale, so we ate one of those each as we drove away. The wine went OK with the chicken curry Felicity cooked tonight, but I wouldn’t care if I never had it again.

Granite Gorge turned out to be a privately owned campground and picnic area, so we paid the entrance fee, ate lunch and set out to explore. There is a lot of wildlife for tourists to see and feed, including a beautiful Spencer’s Goanna (wrongly named on the photo). When it was finished posing on the log, the park owner handed it to me to hold. I was surprised to find it was warm to touch, and its skin felt like a very fine suede.

Close to the ticket office is a place where people feed wallabies, so there were about a dozen of them hanging around looking at us beseechingly. We don’t really approve of feeding wild animals because they stop behaving normally, but it was fun having them come right up to us.

The trail is mostly just markers on a jumble of huge granite boulders. The first section is not too challenging, but the final couple of km involved some steep climbs and the occasional leap across gaps which Felicity found too difficult. I charged down to the end of the trail as fast as I could go, which left me sweating like a pig in the hot sun by the time I got back to her.

There is a weir across the river near the car park forming a pool where a sign says you can swim. We noticed about a dozen turtles about the size of dinner plates and decided that meant it was unlikely there were crocodiles, so we jumped into the cool water to refresh ourselves. We survived to tell this tale, so it looks like we were right.

One thought on “Mareeba”