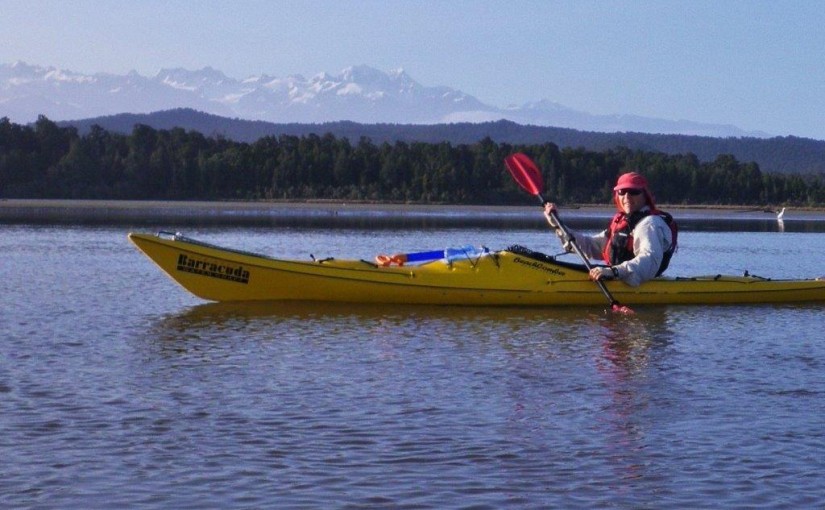 At the crack of dawn we leaped out of bed, scoffed some breakfast and headed for the boat ramp at Okarito wharf. The sun was just rising over the distant hills, and as we had hoped there was almost no wind.


The tide was flowing out pretty quickly, and there are lots of warnings about staying upstream of the wharf, so it was slightly nerve-wracking getting launched, pulling on our spray skirts and getting the rudders down. Once we were under way it was hard work but we made steady progress up the huge lagoon, following a line of poles which mark the channel.

The sun was right in our eyes at first, but when we looked inland we were rewarded by a spectacular line of snow-capped peaks with no cloud at all. The photos don’t really capture how awesome the Southern Alps are. The highest peak is Mt Cook, and the next highest is Mt Tasman.

After about 40 minutes we reached a red arrow in the channel, marking the point where you can paddle into a river. The current was much less strong by this time, and we were able to start taking a few photographs.

At first the river wound its way through flax and low swamp grasses, but after a while we were in the deep forest. The kayak guide had told us that we would come to a gravel bank and that it was worth getting out and dragging the boats over. This allowed us to continue for another half a kilometre or so.

There were lots of birds to watch on the way up-river, but when we were on our way back a white heron let us get within about three metres which was rather exciting. Felicity tried to get a photo of one in flight, but it was out of focus. My photo of her taking it came out just as I hoped.

Before heading back out into the lagoon we landed for a while to powder our noses and have a snack. On the mudflats we could see dozens of royal spoonbills feeding, as well as countless other species of shore bird.

The paddle home was pretty easy with the current helping us. The clouds were rolling in across the mountains by this time, so we felt a bit sorry for the kayakers we met coming the other way who had missed out on the view.

By 10 am we were back at the van, enjoying a cup of tea. As predicted, the wind was starting to pick up and the water was getting choppy, so we made a good call about the early start.