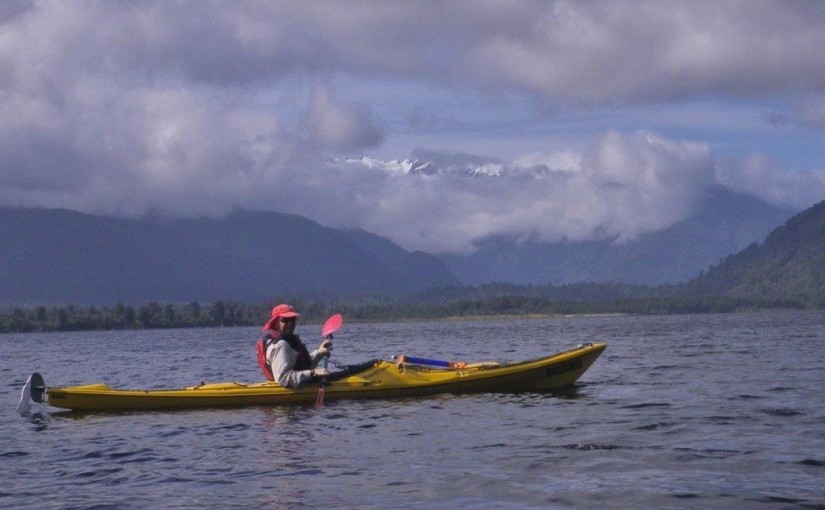 There was a little bit of rain overnight, but by breakfast time the sun was shining and the sky overhead was mostly blue. We spent the night at a DOC campground at the north end of the lake, and were parked close enough to the boat ramp to be able to unload the kayaks without moving the van.


It wasn’t until we paddled around the corner of the channel that we realised that a strong wind had picked up. The water was quite choppy with even the occasional whitecap, but we were committed by this time and headed around the western shore. The wind was in our face, so I figured it would be less effort to get back again when we were tired.

We kept getting tantalising views of what we think was Mt Cook with the sun reflecting brightly off the snow. Then the clouds would roll in and it would disappear again.

After about an hour Felicity was ready to turn around, so she headed to a beach on the eastern shore while I continued for a little while longer to the head of the lake. This was the sheltered end, so I enjoyed about 20 minutes of calm water as I paddled back to meet her.

As I landed I noticed there were fresh water mussel shells on the beach, and when I checked in the water I could see there were hundreds just waiting to be harvested. We collected a couple of dozen each and loaded them into the boats. I tried a few raw – they aren’t as tasty as the green-lipped variety but I’m sure they will make a fine dinner.

The closer we got to the north end of the lake, the rougher it got. The wind blowing down the length created quite big waves which surfed us along, and this required a bit of attention to prevent getting turned side on, and possibly capsizing. I was quite happy to see the entrance to the sheltered channel with the ramp at the end.

While our gear was drying in the sun we had a cup of tea, then packed up and hit the road. It wasn’t far back to the Okarito turn-off and the road out to the lagoon. The wind was even stronger on the coast, so we were glad to have arrived early at the small camp-ground where we picked a sheltered spot.

It seemed like ideal conditions to do a bit of laundry, especially as the campground has a somewhat broken portable washing machine and a double concrete laundry tub with an ancient hand wringer (Acme brand, made in Glasgow). The washing machine is a small plastic container with a tight fitting lid that you are supposed to crank by hand, except that the handle had broken off. I spun it around and around for a while, then we rinsed the clothes in the tubs. I don’t know how clean they are, but now that they have dried in the sun they sure smell better!

After a couple of hours reading we went for a walk out along the beach, which was not very pleasant because of the wind blowing sand at us. We ended up at the wharf where we read a bit about the history of this place. The bar on the Okarito river is even more dangerous than the one at Hokitika, so it seems almost as many ships got wrecked as made it into port. Some ships spent weeks out at sea waiting for suitable conditions to enter.

We called in at the kayak rental shop to ask about the weather and tide, and received some useful advice and the loan of a map which was kind of the proprietor considering that we didn’t spend anything. Our plan is to try and get on the water very early tomorrow, so it looks like we need an early night.

One thought on “Lake Mapourika”