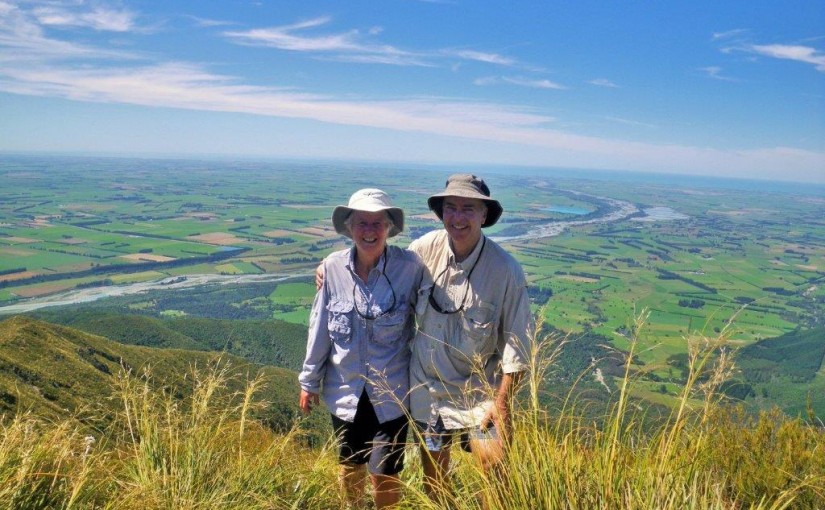 After a couple of hours spent parked in the main street of Geraldine using the internet and eating lunch, we headed inland along a gravel road to a DOC camp-ground at Orari Gorge.


There wasn’t any sign of a gorge, but there was a 90 minute track through the remains of the original podocarp forest, along an old bush tramway then up a hill to a viewpoint. Crossing from Otago to Canterbury has been like coming back to summer – the temperature has literally been 10 degrees hotter the last couple of days.

As we were walking back down the hill we heard an unusual bird song with several different parts, including a bit of a cough which made me think it must be a tui. When we stopped and listened for a while, we saw it was a bellbird, and it was surrounded by at least five others. Perhaps a male with a particularly attractive mating call?

By the time we got back from our walk we were hot and sweaty, so we walked across a farmer’s paddock and jumped into a small creek flowing over a concrete ford. Refreshed and cooler, we relaxed in the van for the evening surrounded by kahikatea trees.

After breakfast we drove a bit further north to Blandswood, which is the start of a popular track through the Peel Forest to the summit of Huatekerekere, which is 1,311 metres high. It is an alpine area that can get pretty hairy in bad weather, but we had picked a perfect clear day.

It took us three hours to get to the top, which is exactly the average time. The last two hours were out in the open and very hot, but it was worth it for the extensive views in all directions. We were passed by a couple of young women who ran up in 1 hour 12 minutes, but on the way down we met four women who started just before us and who would have taken almost five hours if they made it all the way.

We found a tiny patch of shade at the trig to eat our lunch and rest for a while. To the west we could see quite a few snowy peaks of the main divide which we had been seeing from the opposite side of the island a couple of weeks ago. There is a small emergency shelter just below the summit, so Felicity wrote our names in the book before we headed back down. It was quite a relief to reach the bushline and get back under the shade of trees.

There wasn’t anywhere to swim near where we had parked the van, so we had to wait till we reached tonight’s camp-site near where the Arundel Bridge crosses the Rangitata River. There is a line of old concrete foundations in the bush nearby which suggest there was once a bridge next to the camp, but when we went down to the river to swim there was no sign of them continuing out across the braided river so I guess they were washed away long ago. The Rangitata was flowing very fast so we didn’t go out far into the current, but there was enough water to get us clean.

There is quite a bit of traffic noise from the nearby highway, but we are both pretty tired after our climb and I suspect we will sleep soundly.