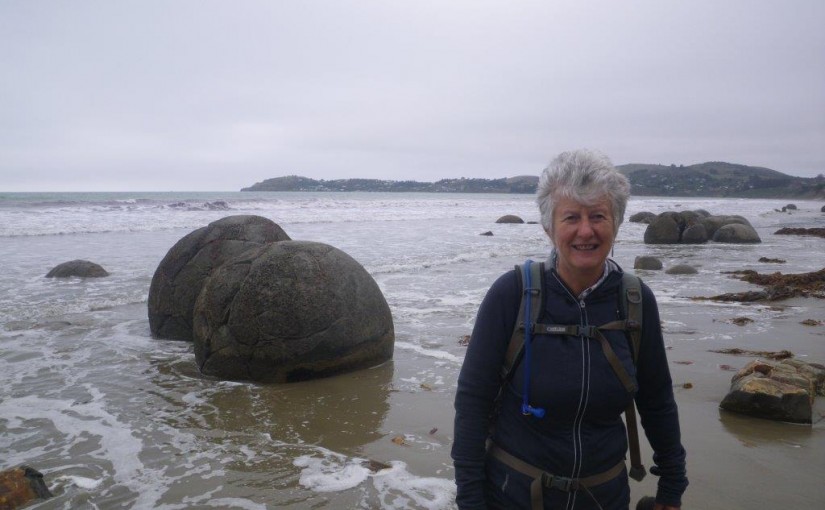 In the town of Moeraki, just south of the famous boulders, we found a commercial camp-ground overlooking the wharf. If the weather had been a bit clearer we might have been able to see the boulders as well, but the view was limited by the low cloud.


While our dirty clothes were being washed in the laundry, we enjoyed our first hot shower in several weeks, then spent the rest of the day working on our computers. Many camp-grounds have complicated and often barely functional systems for selling you incredibly expensive wifi by the hour, but this place just charged us $5.00 for the password which let us use as much as we wanted. I wish more tourist spots operated like this.

As I was packing up after breakfast a young man came and admired our kayaks. He said he was from Scotland, and normally used skegs rather than rudders, so I told him about out trim to the Arisaig Skerries last year. He asked where we had been recently and I told him about some of the lakes and rivers out on the West Coast. He then remarked casually that he and a friend kayaked across Cook Strait last Sunday – on a bearing all the way because of fog. I told him he’s way out of our league!

The weather was a bit better – still cold but not raining – so we drove just south of the town to visit the Katiki Point lighthouse. This is also a seal colony, and in addition to literally hundreds of common fur seals, we probably saw sea lions, leopard and maybe even elephant seals. They all look pretty similar to me. They were lying all over the grass out at the end of the track, so it was impossible to always stay five metres away like you are supposed to.

The bay below the point is a major breeding colony for yellow-eyed penguins, and although you are only supposed to see them at dusk when they return from feeding out at sea, we saw about a dozen sitting at the top of the cliff, or hanging out in the shrubbery. There used to be a Maori Pa in this spot, so presumably there wasn’t much wildlife then, but one of the couples employed to run the lighthouse in the 20th century spent their spare time planting up the coast to make it attractive to penguins. One of the penguins we saw was moulting, but it’s a bit hard to see in the photo because it was lying on the grass with its head down.

As we were looking at the seals, a couple of small dolphins cruised by offshore, leaping right out of the water every now and then. There were also heaps of gulls and other sea birds nesting on the steeper parts of the cliffs, and some of them were a little bit aggressive about us walking past and I wondered if we were about to get shat on.

After seeing so much wildlife, the famous Moeraki boulders were almost an anti-climax. They are a fascinating phenomena, caused by deposits forming around a shell at the bottom of an ancient ocean then getting rolled along. Or something like that – neither of us paid enough attention at the informative sign to be 100% sure. Some of the rocks have broken open, showing that limestone deposits built up in cracks, making the round boulders weak at that point. For some reason they only occur along about 100 metres of coastline, so the tourist density was pretty high and it was hard getting the photo with just Felicity.

Just south of Oamaru, we made another detour off the highway to visit the Waianakarua viewpoint, out on the coast. There is supposed to be a sea-arch here, but it is more of a small cave which spurts water every time a wave hit the other side of the cliff. The four shags out at the end of a narrow promontory were an unusual grey colour instead of the usual black.

In Oamaru we stocked up at a supermarket then drove down to the port to eat lunch. It started to drizzle again so we decided not to explore the town, and to continue north instead. We’ve ended up at another DOC camp in the mouth of the Otaio Gorge. The surroundings are a mixture of farmland and some kind of pine (not radiata) forest, but there is a rushing stream next to the van so it is quite pleasant.