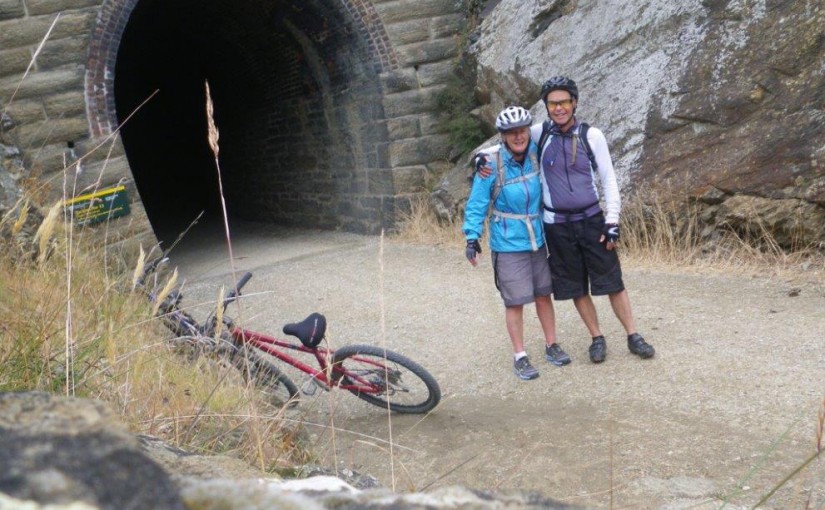 All the way across the Haast Pass it continued to pour with rain, so although there were numerous interesting-looking places to explore, we didn’t stop. When we arrived in Hawea, we finally had cell-phone reception and internet again so while we ate lunch at the edge of the lake we caught up on emails and blog updating.


There obviously hasn’t been much rain recently because the whole area is very brown and dry, in stark contrast to the lush green of the West Coast. At Wanaka we visited a supermarket, then drove out along the road towards the Treble Cone ski field to a camping spot near Diamond Lake. It was still raining, so we stayed warm and dry inside the van for the evening.

The sign for the toilet said it was 500 metres away, without mentioning that it was also about 200 metres higher up the hill, beside the lake. Fortunately the rain had stopped by morning, so we enjoyed a bit of excersise after breakfast, and got to see the attractive little lake.

My aunt lives at Alexandra, so we drove over to visit her for lunch. Realising that we hadn’t had a wash for a day or so, we stopped along the way and plunged into Lake Dunston, which wasn’t as cold as I had feared.

We were just finishing eating when my cousin Steve dropped in, so we spent a few hours catching up and sharing family gossip. We have been travelling for days with a box of perfect looking apricots that are hard as rocks and refusing to ripen, but Aunty Pat gave us a bag of somewhat battered and bruised apricots that have turned out to be sweet and delicious.

The water in Central Otago contains a lot of calcium and doesn’t taste very good, so at Steve’s suggestion we drove to Lowburn to fill the van because there is a natural spring next to the community hall. While we were there a stream of locals stopped to fill plastic containers.

Beside an inlet of Lake Dunston at Cromwell the Motor Caravan Association has a large site which for some strange reason is only allowed ten vehicles at a time. There were only four others there when we arrived, so we found a spot with a view of the water and went for another swim before dinner.

This morning we drove to Lauder, which is a town on the Central Otago Rail Trail. The bits of the trail that we have passed haven’t actually looked very inviting to me, being flat, straight, and passing mostly brown paddocks. The section just north of Lauder though is probably the most interesting part of the whole trail, so I did a bit of maintenance on the bikes and we set off.

Not far out of town the trail starts gently climbing into the Poolburn Gorge. Behind the hills is the huge Ida Valley, and this narrow waterway is the only drain for the entire area. The railway in this area had lots of cuttings and is surrounded by interesting rock formations. We crossed the river on an unusual curved bridge, then went through a “S” shaped tunnel. Some sections were lined with brickwork, but other parts were solid rock.

There is a second, shorter tunnel a bit further on, than a viaduct accross the valley. Felicity decided to turn back at this point, about 7km from the van, but I continued for another 8km to just past the site of the Ida Valley station. Along the way I found dozens of wild apple and pear trees, but none of the fruit was ripe enough to eat. Apparently they grew from cores that train passengers tossed out the windows.

At one point I surprised a huge hare on the other side of a fence. It was as big as a medium size dog, and ran along parallel to me in panic. I could just keep up by peddling as fast as I could, but I reckon it would have got tired sooner if we had been in the open.

The section through the Ida Valley is flat and straight, and soon got a bit boring, I was also starting to get hungry, so I turned around at the 15km mark and headed back to the van. It was mostly down hill so I kept up a pretty good speed, and felt quite satisfied with my ride by the time it was over.

Tonight we are parked on the edge of the Blue Lake at St Bathans. The lake is more a grey-green colour than blue, but it did a good job of washing my sweat away. We had a wander around the old town, looking at buildings made of stone and mud brick. The town was built for gold miners, so there isn’t much of an economy any more. People tried to farm, but even a century ago there was a big problem with rabbits, as well as heavy snow in winter.