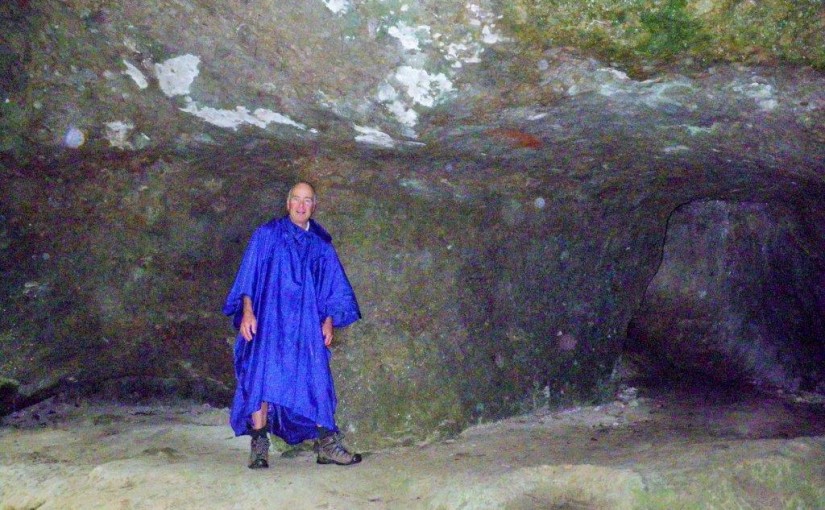 It started raining again as we left Central Otago and drove out towards the coast. We parked up for a while in Ranfurly where there was internet available, but we weren’t tempted to stray far from the van.


Just north of Palmerston (south), we drove off the highway to check out Shag Point where there is a seal colony. We had wondered about staying there, and I suspect we would have got away with it despite the “no camping” signs, but when we went for a brief walk to look at the seals the wind nearly blew us away.

The area used to be mined for coal, right at the edge of the beach, but the weather was so wild we decided not to explore and to look for somewhere more sheltered. A couple of kilometres further up the highway, and inland up a side road is a DOC campground, so we headed there.

It didn’t look very promising at first, as it is surrounded by recently logged pine forest, but when we drove across a shallow ford and through the gate we found a grassy glade surrounded by high rocky cliffs which made the area fairly sheltered.

The rain was still falling in the morning, but when we saw a sign advising that there were caves to see we put on our boots and ponchos and set off on a 90 minute loop track. The caves were basically overhangs, where soft clay had washed out from under solid rock above. They were quite dry, and it would probably be possible to sleep in them if you were keen.

If we had chosen to walk the loop counter-clockwise we would have seen the sign warning that the track is slippery in the wet, but it wasn’t until we had climbed high up one side of the gorge that I started to realise it would be hard getting back down. Felicity found it particularly difficult with her sore toe, and we went very slowly down the muddy trail, clinging on to small shrubs and trees whenever we could.

It was worth the trip to see the gorge from the top, because down near the river the bush shields much of the view. The track was apparently made by the Conservation Corps, which I seem to remember was a job creation scheme for unemployed youth towards the end of last century.

When we got back to the van we were damp and sweaty, and as we could not summon any enthusiasm for washing in a cold river we decided to head for a commercial camp ground with power, hot showers and a laundry.