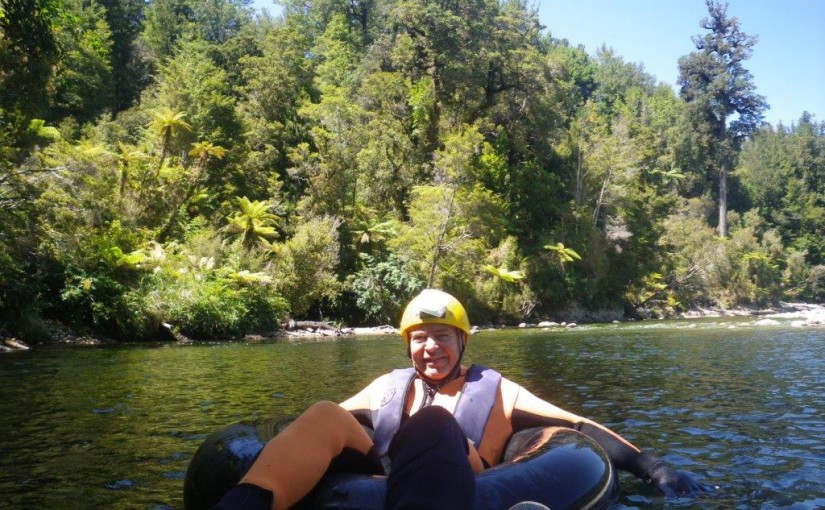 At 8.30 am on the first of January we turned up at the base of Underworld Adventures Ltd to join their morning cave rafting tour. This takes place through part of the Nile River Cave system in Paparoa National Park.


Our guide Kylie issued us with wetsuits, helmets and headlamps, and when we had changed we were bused up the Nile River to a site where a music festival used to take place every year back in the hippy days until the promoters went broke. From the end of the road there is a tiny train built in 2002 to take tourists further up the valley through the primeval rain forest. Many years ago the movie “Lost World” based on the book by Arthur Conan Doyle was filmed here. It wasn’t hard to imagine a tyrannosaurus charging out of the trees.

At the end of the line we disembarked and walked a few hundred metres to the edge of the river where we picked up large rubber inner tubes. These had to be carried over a suspension bridge and up about 130 steps to the Triclops entrance to the cave. This cave system has more than 8km of explored passages, and is probably the 9th largest in New Zealand, so we only explored a small corner of it.

There were lots of stalactites, stalagmites and other calcite formations to look at as we carried our tubes through the top two levels of the cave. Most of the way there was a roped-off path that we had to stay inside to avoid damaging the fragile environment. At one point, deep inside the cave, Kylie told us all to turn our headlamps out so that we could see what total darkness looks like. Some people imagine they can see their hands waving in front of their faces, but it just looked black to me.

With our tubes left piled up at an intersection, we explored one passage unencumbered. Kylie showed us some round rocks which, when split open, reveal fossils that are millions of years old. We saw crabs, shell-fish and ancient leaves.

For the final section of the cave we sat in our tubes with our feet under the shoulders of the person in front so that we formed a train. With our headlamps off, we drifted backwards gazing at thousands of glow worms lighting the ceiling. All too soon I saw a patch of sunlight growing ever brighter, until finally we emerged from under a cliff on the side of the Nile River.

From there it was a matter of drifting backwards down-stream, except for a couple of rapids which you negotiate feet first and with your bum lifted as high as possible to avoid hitting rocks at the bottom of the river. The water outside the cave was significantly warmer than inside, so we weren’t in a hurry to get out when we arrived back at the bridge.

This is a fantastic trip, and I enthusiastically recommend it to anyone touristing in this area. Kylie took most of the photographs, which are free to download from the company website for the next nine months after a trip.

It was almost 1.30 by the time we were back at the van so we ate lunch in the carpark before setting off down the highway again. We didn’t drive far – just south of Charleston is the Tiropahi Track where we are spending the night.

This track is an old logging tramway that follows a river into the bush. It is mostly pretty straight, and only a gentle grade except for one section where the original trail has been washed away by the river necessitating a climb up over the slip.

We passed high limestone bluffs, and eventually emerged from the bush onto an open pakihi swamp that was once a milling site. From here we could see a distant line of hills. Considering that there has been no rain down here for several weeks, I was surprised by how boggy the ground still is. This track would be much less fun if it was wet.

After an hour and a half we came to a 4WD road and it was time to turn around. Although it was easy walking I was quite glad to arrive at back at the Tiropahi River crossing with our van on the other side. We had a quick swim to wash of the sweat before heading indoors to escape the sandflies.