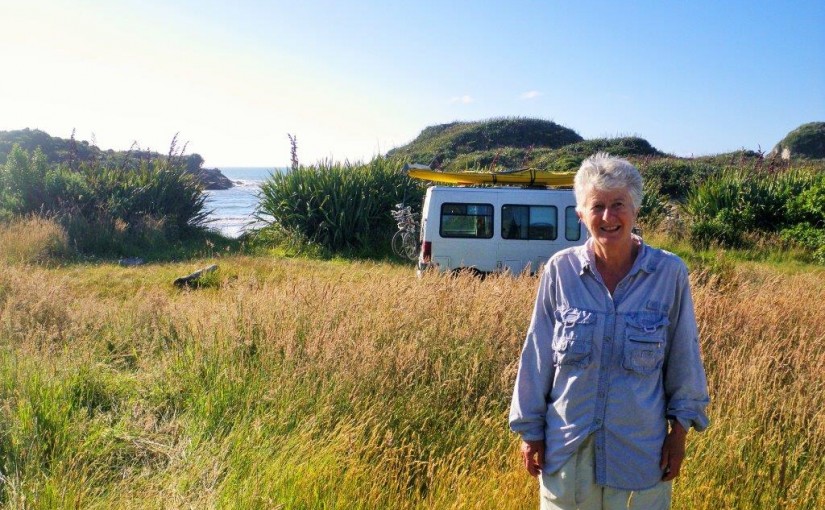 
Out on the coast is a beautiful little bay surrounded by rocky headlands, with a narrow entrance leading to the sea. There is a 15 minute loop walk to see coastal rock formations advertised, so we parked the van and set off.

On the cliffs a track marked with orange DOC triangles led further along the coast so we kept walking. We were enjoying the scenery so much that an hour and a half later we were still going. By this time it was mid-day, and as we hadn’t packed any lunch and had no idea where the track led we reluctantly turned back.

The rock formations were fascinating to look at, and the coastal forest with trees stunted by the wind from the sea was very attractive. Mature manuka trees barely reached our shoulders, and even in relatively sheltered gullies giant rimu seldom made it more than four metres.

There were several viewpoints from which we could see (and smell) seals on the rocks below. At one point we passed a couple of old macrocarpa trees, which suggested that someone had once lived or farmed there. There were hundreds of purple sun-orchids along the track, and a few pinkish ones that may be a different species.

Because we were hungry and didn’t stop to look at things, it only took us an hour to get back to the van. We noticed that another van had left a prime camping spot right in front of the beach in our absence, so I quickly moved in.

After a welcome lunch we lazed around reading for a couple of hours, enjoying the ambiance of our camp-site. In the late afternoon we swam in the sea, then set of around the shore in the opposite direction to the morning’s adventure.

There was a sign warning that the rocks were dangerous, and that waves could knock people down if they didn’t keep an eye out. A little further on we came to a memorial for someone who had died, surrounded by fresh flowers and a planted pohutakawa tree.

We climbed around the rocks for a while, staying well clear of the waves, but eventually we came to a narrow chasm with water at the bottom that I thought looked a bit too much of a challenge so we turned back. On a relatively easy section of rock Felicity slipped and tumbled down the slope, giving herself a couple of nasty grazes on her legs. I was glad we hadn’t tried to climb near the sea!

New Year’s eve dinner was celebrated with whitebait fritters, then we watched a movie while locals let of fireworks on the hill behind us. I was fast asleep before midnight, so I missed the second wave of explosions at the start of 2016.