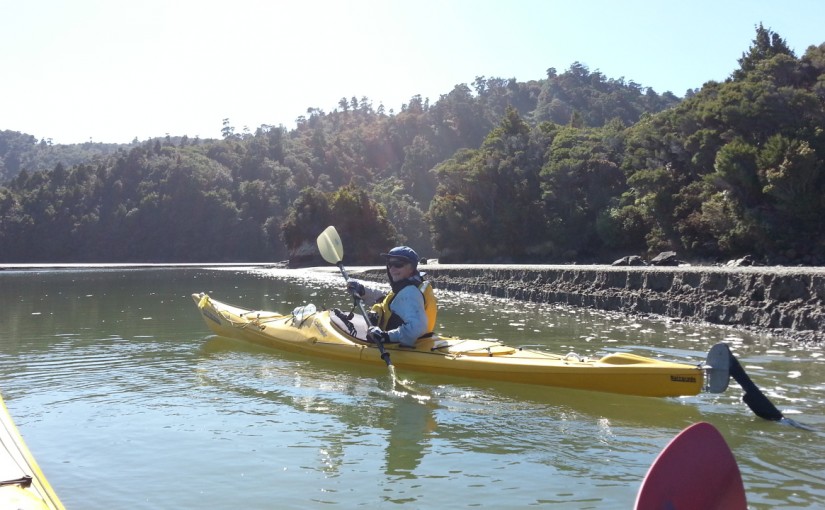 We only had a couple of kilometres to drive from our camp-site to the bridge over the Wairoa River. This is not to be confused with the river with the same name that we walked along at the end of our Richmond Range tramp a week ago; this one empties into the Whanganui Inlet out on the west coast past Collingwood.


It was at least two hours before high tide when we launched the kayaks, giving us plenty of time to explore far upstream. As we set off we could hear the sounds of loud dance music of the type that presumably sounds good if you have taken lots of mind-altering drugs. This was not what we had in mind when we planned our trip, but fortunately the river rounded a bend and the music was replaced with the sound of bird calls.

There was such a powerful tidal current that we didn’t paddle much, enjoying the view as we glided along. This river flows through a bush-lined valley, and from the water we had great views of the trees on each bank. These were predominantly beech, but with rimu and southern rata towering above tree ferns and flowering kamahi. When you are walking along a track through trees you don’t get the same expansive views.

Because a gliding kayak makes almost no noise, we drifted to within a few metres of a large black goat walking along the bank. He stood looked at us for a while, trying to figure out if we were a threat, but it wasn’t until Felicity said “can you see the goat?” that he disappeared into the bush.

As we got further into the hills, the number of fallen trees in the water increased, and it became more difficult to get past. Sometimes it was almost like a slalom course as we navigated through tiny gaps.

Eventually we got to a point where our way was blocked, so we backtracked a little and found a spot to land. We could see that the tide was still coming in so we decided to wait to see if the rising water level would let us go further. If we stayed very still, dozens of small crabs emerged from holes in the mud, but the slightest movement sent them scurrying back into their homes.

After about 20 minutes sitting in the sun we decided to have a swim, and by the time we were dry and dressed the water was nearly 300mm higher. We had noticed several fritters worth of whitebait swimming along the river edge, and as I sat on a log with my legs in the water they nibbled gently at my skin.

We paddled on for another quarter of an hour before coming to a large tree stretching from bank to bank, which meant it was time to turn around. Just below this we found a good place to land and eat lunch, and as we did so we saw the current slow and eventually start flowing down stream as the tide began to ebb.

It took us about an hour of paddling before the sounds of thumping bass alerted us to the fact that we were nearly back at the van. We made a cup of tea and hung out for a while so that our gear would be dry before we packed it away – it might be a while before our next kayak.

A week in Golden Bay seemed like enough so we drove back across the Takaka hill and stopped at Riwaka to buy cherries, blueberries and some vegetables before heading south alongside the Motueka river.

Not long after the road crossed to the east bank we found a reserve where camping is permitted. There isn’t much of a swimming hole, but we managed to get wet enough to wash off the dust and sweat of the day, then got savaged by sandflies while we dried and dressed. I guess they are only going to get worse as we travel south – it is good to have insect mesh the windows of the van.

One thought on “Wairoa River”