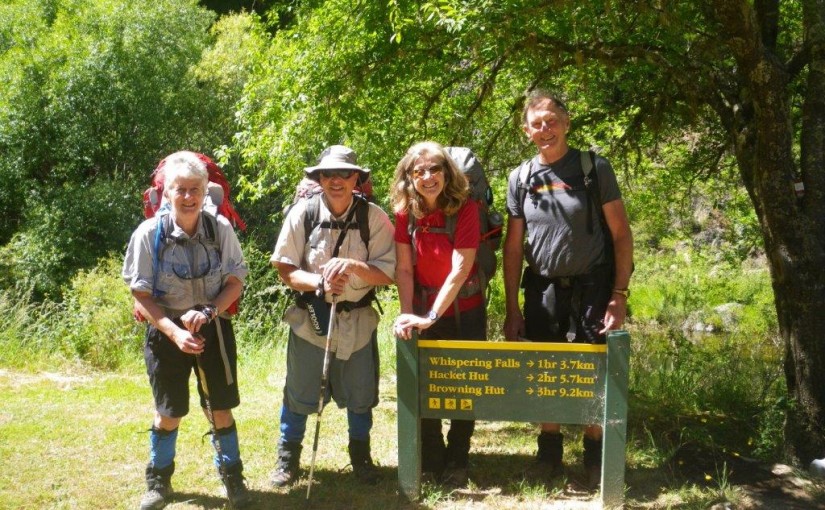 Our voyage across Cook Strait turned out to be very pleasant, with the sea so calm I could almost have kayaked.

On the way from Picton to Nelson we stopped at Pelorus Bridge for a swim in the river before lunch. The water was cold, but beautifully clear.

We spent the night parked outside our friends Bob and Helen’s house, after enjoying dinner and catching up with gossip.

I was woken just before dawn by what I was certain was the sound of a rat eating an apple, and sure enough I found a half devoured piece of fruit under one of the back seats. I hoped that the perpetrator had departed,  but just as we were locking up Felicity spotted it, hiding in a bin. So we have a challenge waiting for us when we get back to the van on Saturday night.

Helen drove us to the town of Hope where we were picked up by our friends John and Jocelyn, and another woman called Julie. The five of us then drove to the Aniseed valley and set off up the Hacket Track.

The first couple of kilometres were very easy, so we were lulled into a false sense of complacency about the rest of our planned route. We ate lunch at Hacket hut, then joined the Te Araroa trail as it headed up hill into the Richmond Range.

After what seemed like a long time, we were wondering why we hadn’t reached “the impressive Pyramid Rock”. John checked the map with his GPS and discovered that we were way past it.

All the huts in these mountains were built by the Forest Service about 60 years ago, so they are a bit more utilitarian than the modern DOC huts. They also only have five or six bunks, so if we meet any other trampers someone will have to sleep on the floor.

Fortunately,  we had Starveall Hut to ourselves, and if we opened the door we had a fantastic view of Tasman Bay with the Able Tasman park in the distance. We didn’t enjoy it for long because a few thousand sandflies arrived and forced us to close it.

The evening sun streamed through the two windows,  so the hut was warm and dry as we ate dinner and prepared for bed. A couple of Te Araroa walkers turned up, but after eating their dinner decided to continue on up the trail and camp in their tent.