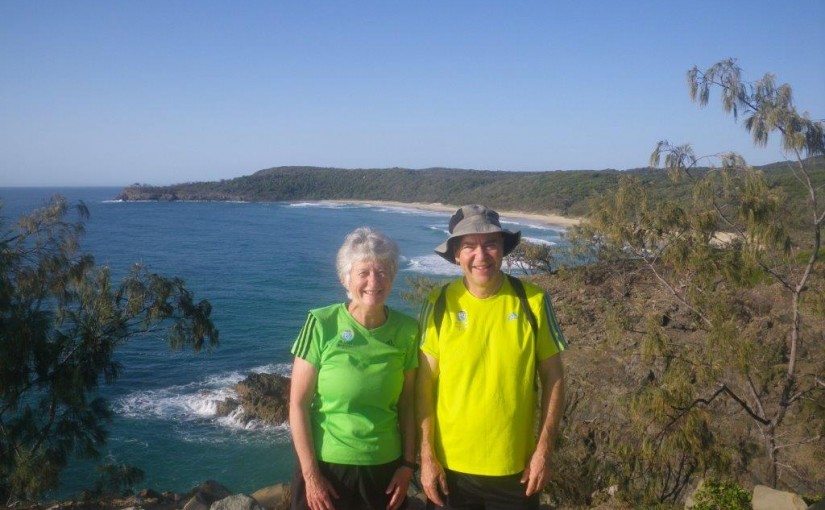 My latest grandson Saul is almost five months old, but getting his extended family together in one place has taken a bit of time to organise. Felicity, Judith and I flew over to Brisbane on Friday morning, at the civilised time of 9.30am.


We drove over to town before the traffic built up, left our car at the Fliaway car park, and took their shuttle to the airport in time for a leisurely breakfast at the Koru club. Thanks to our “Gold Elite” status (gained because Felicity does so much travelling), we discovered that we had been upgraded to business class on the plane, which meant we had huge seats and more legroom than we could possibly use. We had bought no-frills tickets which meant no food or movies unless you pay extra, but all the TV videos still worked, much to my surprise. I had taken the precaution of loading some movies onto my tablet, so I watched one about zombies attacking a small town in Northern Alaska which involved most of the population getting eaten and a lot of blood splattered snow.

After checking in to our apartment at Noosa Heads and visiting the supermarket to pick up supplies, we drove over to Tom and Courtenay’s house in Tewantin to see the grandsons. Eli has changed from a cute toddler to a mischievous little boy, especially now his curly blond hair has been cut. He wasn’t very impressed with the clothes and books that we brought as presents, but he seems to have so many toys we don’t think he will be deprived.

Saul was asleep when we arrived, but the sounds of conversation eventually woke him up and we got to make his acquaintance for the first time. By late afternoon the two boys were ready for their dinner time routine, so we headed for home to prepare our own meal.

Felicity and I enjoyed a couple of delicious steaks from Skippy the bush Kangaroo while Judith ate her vegetarian haloumi. The apartment has a swimming pool and a heated spa, so Felicity and I spent the remainder of the evening sitting in warm water surrounded by tropical palms.

On Saturday morning we were woken about 4.30 am by the dawn chorus, and we could tell we were in a foreign country by the unusual bird song. Queensland doesn’t have daylight saving, so the sun comes up very early. Felicity and I headed out for a run in the Noosa Heads National Park. Even though we arrived soon after 7.00am, the car park was almost full, and it was only because our hire car is a small Hyundai that we could squeeze into a space too narrow for larger vehicles. There were hundreds of other runners, walkers and surfers out enjoying the cool morning air, and the coastal trail was quite congested all the way out to Hell’s Gate. We returned via the inland Tanglewood track, which was a bit more peaceful if not so scenic.

Back at the car, we picked up our swimming gear and walked along the board-walk towards town till we came to the first small sandy cove. The sea was a very pleasant temperature, and we were able to catch some great rides body-surfing on the waves.

After our early morning exertions, we lazed around home for the rest of the morning, then headed down to meet the rest of the family at the Noosa River waterfront for a barbecue. Eli and Saul are very lucky that both sets of grandparents get on with their ex-partners, so there were seven of us older generation present as well as aunt Judith and uncle James.

Felicity and I went for a swim in the river with Eli and a couple of pelicans. He is at the stage where his confidence in the water slightly exceeds his ability, so we had to keep a close eye on him. He can dog-paddle quite well, but still needs to learn to swim properly before he will be safe out of his depth. He had a lot of fun scooping mud of the bottom and throwing it at me every time I started to leave the water, which meant I had to go back and wash it off.

Soon after 6.00 the sun set and it started to cool off so we began packing up. About a dozen huge fruit bats appeared and entertained us by flying around a nearby tree.

On Sunday morning we drove to Sunshine Beach at the south side of the National Park, and ran over the headland and along Alexandria Bay, near where we had turned around the day before. We returned via another inland trail which we had to ourselves. The waves at Sunshine Beach are pretty wild, so we walked along to the surf club to swim between the flags. They were only about 50 metres apart, and there were almost a dozen surf lifesavers keen to rescue us if we got into trouble. There was a strong undertow moving along the beach, so we didn’t go too deep and made sure we didn’t stray out of the patrolled area.

We headed over to Tom and Courtenay’s house after lunch for the naming ceremony. Saul’s grandmother Waveney acted as the celebrant while we welcomed Saul into the family. The remainder of the afternoon was a pretty relaxed affair as we sat under the covered verandah at the back of the house, eating and drinking. My sister Grace and her partner Rikii turned up an hour late due to relying on FaceBook for the event timing, but we enjoyed chatting to them about the plans for their wedding next year.

By the time the sun began to set Eli had already fallen asleep while Felicity read him a story, and since Saul was obviously tired but reluctant to miss out on any excitement we decided to depart. We invited Grace and Rikii over to our apartment for dinner, so Judith travelled with them to help navigate while Felicity and I made a quick stop at the supermarket to pick up some steak.

This morning Judith wanted to come with us for our morning run, so we decided to go back to the main entrance of the National Park and go out along the beautiful coastal track again. It was a great choice, because half way out we saw a group of people looking out to sea watching a pod of hump-back whales travelling down the coast in the same direction as us. One of them was just a baby, and it kept leaping right out of the water and even twirling around – a great display. Some of the larger animals further off shore were only visible as an occasional plume of spray when they breathed. I tried hard to get a good photo, but all that showed up is a little dot in the centre of the image.

We swam at the same small cove as on Saturday. The surf wasn’t quite as good, but the water was so clear I could see small fish swimming around my feet. I sure wish the sea was this warm in New Zealand.

After breakfast we packed up and drove to Tewantin to say our goodbyes. There was a note on the door informing us that they were out for breakfast but would be back soon, so we went around the back of the house to wait under the verandah. Fortunately, Sasha the guard dog knew us by this time and was very welcoming. It wasn’t long before they arrived home, whereupon I was immediately recruited to push Eli on his swing.

It has been a great extended weekend, and I look forward to more trips across the ditch in the future.

One thought on “Saul’s Naming Day in Noosa”