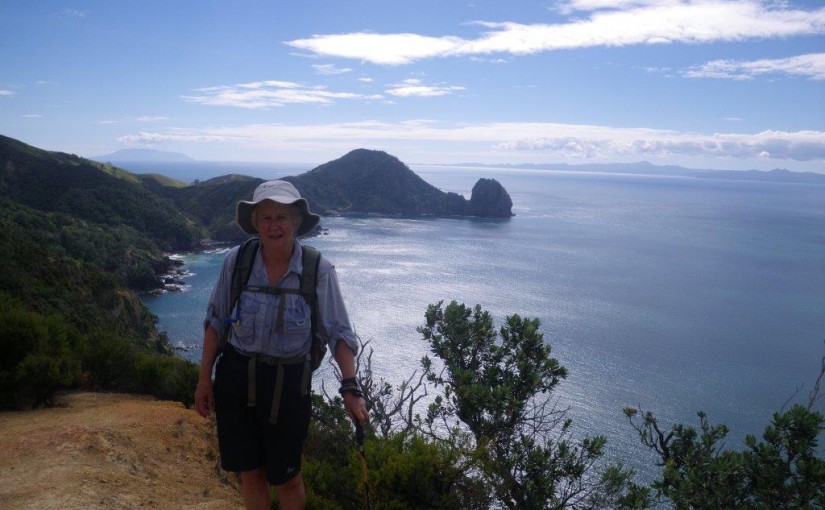 For many years Felicity and I have had an ambition to hike the walkway between Fletcher Bay and Stony Bay at the northern end of Coromandel.


The camp manager suggested that we walk south on the Stony Bay mountain-bike track, and return via the coastal walkway. I have read that mountain bikers in the know avoid the inland rout and use the walkway, which is permitted by DOC.

I could understand why within a few metres of the junction. The “mountain-bike track” heads straight up a ridge to almost 550 metres above sea level. I find it hard to believe anyone would be able to ride up, and only the most skilled of riders would make it down.

We were rewarded by some fantastic views up at the top. The track soon headed into the bush, and followed a very steep, bulldozed track all the way back down to sea-level. I don’t think it would be ridable in an uphill direction, and not enough fun coming down to make it worth the effort of dragging a bike to the top of the hill. My guess is that this track was planned by someone who doesn’t ride a bike.

At Stony Bay we enjoyed a well-earned swim and a picnic on the beach. There is another DOC camp-ground here that I am sure we will come back to one day.

The coastal walkway is spectacular, and would be great to ride a bike on.

The last photo, of our beach-front camp site, shows Little Barrier Island on the horizon in the centre and Great Barrier on the right.

One thought on “Coromandel Walkway”