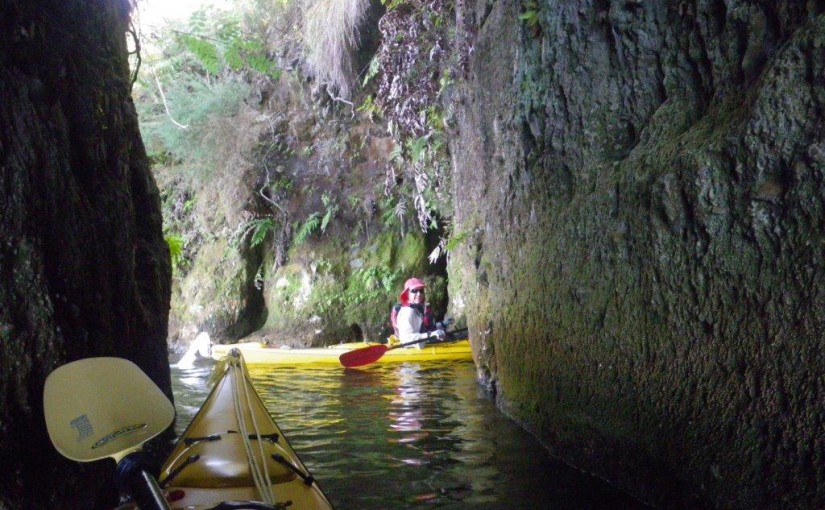 With conferencing over, we spent Friday night at a DOC camp ground on the shore of Lake Okareka, off the road out to Tarawera,


I was surprised to find that we’d never visited this particular lake before, and was keen to set out exploring first thing after breakfast. The north and east sides of the lake are covered in beautiful native bush, but instead of turning back as we’d planned we continued to circumnavigate. What had looked like boring paddocks along the southern shore turned out to be attractive swamp plants with a walkway that we will no doubt return to one day.

As we turned north again we passed some very flash lakeside homes, some with beautiful landscaping. In front was a big patch of water lilies and reeds with passages cut to allow boat access to the shore.

As we passed a beach full of families swimming and picnicking we could see the camp ground ahead, but the best part of the trip was still to come. I noticed a small cave in a rocky headland, and when I paddled into it for a closer look I realised it went right through. This lead to another passage that also went through the rock, so we had a fun time exploring every hole we could fit the boats into.

After a late lunch we decided to start heading north, and chose a reserve near Putaruru to spend the last night. This is right on the bank of the Pokaiwhenua Stream, and we parked next to a waterfall. A couple of young guys turned up with a white water kayak, and one of them entertained us by paddling over it a few times.

Before dinner we had a quick swim in the creek, and Felicity had just run naked back to the van when one of the young men returned in his ute to pick up his mate who had paddled down the creek to where we were swimming.