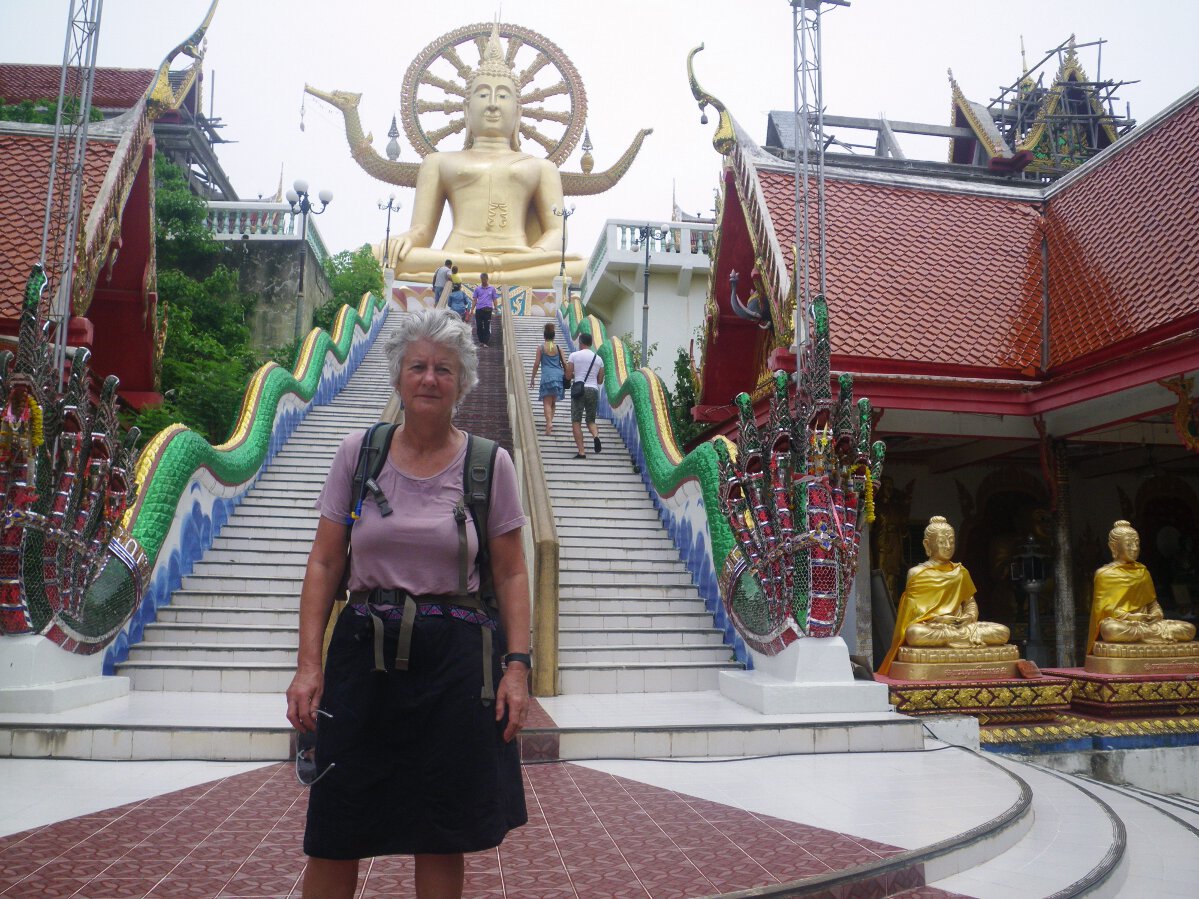 My first thought when we stepped off the plane in Ko Samui was that it would be good to change out of my winter clothes at the first opportunity.


Fortunately the van that took us from the airport to our accommodation was air-conditioned, but I was still drenched with sweat by the time we reached the Free House Bungalows on Bophut beach. This is one of the less popular tourist beaches, but as we discovered today this has the advantage that you don’t get hassled every five minutes by itinerant sellers of sarongs, icecreams, artwork, dounuts, etc., etc.

As soon as we dropped our bags we headed for the water, which is so tepid it is only barely refreshing. It is a bit murky, and the bottom is somewhat muddy, (I tell myself it is mud but there is a small part of my mind that wonders what happens to all the sewerage from the hotels which line the coast of the entire island). It is obvious that tourist numbers are fairly low at the moment, but this is a good thing because our hotel hires out jet skis to drunken, inexperienced young men who zoom in at full speed close to swimmers.

I had been a bit nervous about travelling to a country that is effectively a military dictatorship at the moment, but we haven’t seen a single soldier, in contrast to another visit I made to Thailand just after a military coup in the late 1970s. That time there were tanks in the streets,  and sandbagged machine gun nests at every main intersection in Bangkok. In tourist areas like Ko Samui at the moment you would have no hint of any political turmoil. The only news I have seen is that the military has decided that the ban on more than five people congregating in public is not going to apply to young westerners attending this month’s full moon party on the beach at Pha-ngan.

We spent Saturday afternoon walking down the beach and around the point to the east, which was not as pleasant as it might have been because the sand is mostly ground up coral which grated all the skin off the bottom of our feet unless we wore our crocs, in which case the grating occured on the sides and top of our feet as well. There is also a huge amount of rubbish around the coast, except directly in front of the hotels where the sand gets manicured every morning before the guests wake up.

Around evening,  we were sitting in the bar drinking a coffee when a huge thunderstorm passed over. There was a terrific wind, torrential rain, and spectacular lightning as the storm headed out to sea. It made us reject any plan of heading out to eat at one of the many interesting restaurants nearby, which caused us to discover that the bad reviews our hotel’s restaurant has are not accurate.

Today we walked for several hours to the north west, past Chaweng beach and across the causeway to the big Buddha at Wat Phra Yai Ko Pan. I was amused to see a painting of Buddha meditating serenely with a scantily clad dancing girl beneath him; I presume indicating his indifference to pleasures of the flesh. Nearby was a sign instructing female tourists not to wear bikinis, but perhaps that was because the monks are not so enlightened. Unfortunately the Wat is directly under the flight path leading to Samui airport, so it’s not the best place for meditating even without the distraction of half naked tourists!

We were tired of walking by this time, so we hailed a songthiew and travelled south to Lamai beach. We picked the most down-market of all the resorts and ate lunch in their restaurant on the beach so that we could leave our day packs while we cooled off in the sea. The bottom was sandier than our home beach, but the surface had a layer of foamy scum that looked a lot like detergent. As we dried in the sun on the resort’s deck chairs we were hassled continually by salespeople, making us glad we are staying in a quieter neighborhood.

At the end of the beach are some interesting rock formations that we paid 10 baht to climb up onto. We poked our nose into an attractive “bar” built out of bamboo and driftwood in between the rocks; it was packed with glazed eyed youngsters who didn’t seem to be doing much drinking.

Back out on the main road, we saw a sign informing us that “Valentine Rock”, a waterfall and a viewpoint were just half a km down the road, so we wandered down to take a look. It cost us  60 baht each to get through the entrance, which we thought rather expensive for what we got. The waterfall had clearly been enhanced if not completely constructed by the owners,  and the rock while impressive enough, was spoiled by a gaudy plastic sign telling us that it was a waterfall. The climb to the lookout was very hot and sweaty indeed,  and the view was not particularly impressive. It exists because there are a  couple of short zip lines up there, but they were so expensive, and pathetic compared to the ones at the Gibbon Experience in Laos, that we weren’t even slightly tempted.

We had passed a mountain bike park in the morning,  with a bike hire shop just down the road, but the track looked pretty sucky from what I could see and it was all out in the hot sun so I wasn’t tempted by that either.

We jumped in another songthiew heading back towards Bophut, which dropped us a couple of km from our hotel due to a communication error. It looked like another thunderstorm was comming, so we hurried back as fast as we could. Felicity ended up stopping and putting on her poncho,  but I decided to risk it and made it home only slightly damp.

Like yesterday, the  storm was all over in less than an hour,  so we returned to the restaurant where we ate lunch on Saturday and enjoyed another excellent meal. We  have just packed our gear ready for an expedition to Ang Thong National Marine Park tomorrow.

One thought on “Bophut Beach”